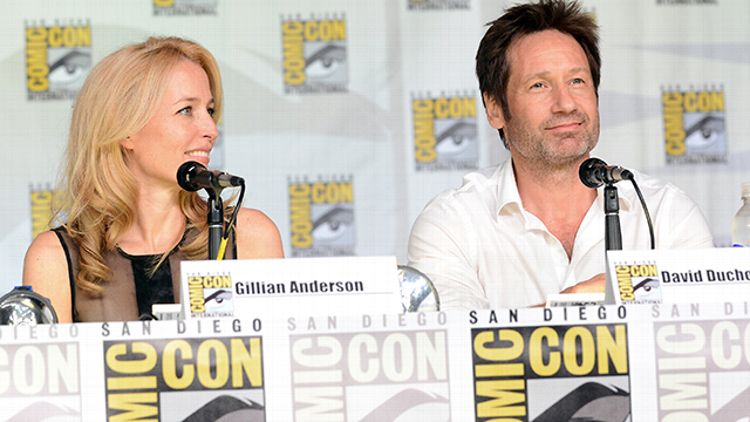 File-heads everywhere had high hopes for The X-Files 20th anniversary reunion panel at Comic-Con this year. And, no, they didn’t end up proving the existence of extraterrestrial life forms, or even promising a third X-Files movie. But it was pretty good nonetheless.

As HuffPo reports, most of the questions were directed at the unconsummated love between Mulder and Scully, and David Duchovny and Gillian Anderson had a ball batting those around.

Did they ever actually get together, Duchovny mused? “Well, something happened. Because we have a child,” Anderson said. She recalled that a sex scene between them had been shot at one point, but never aired. “It’s somewhere,” the actress added. A fan asked if Mulder and Scully were to ever go on a date, what would they do? “Have sex,” Anderson replied matter-of-factly. “Then maybe dinner?” Duchovny retorted without missing a beat. “I think it would be barbecue,” [creator Chris] Carter added. When another fan asked when they thought that the characters were in love, Carter said, “I think it was when [Scully] first walked into [Mulder’s] office in that basement,” eliciting an “awww” from the crowd. “Scully was kind of my fantasy woman,” he later added. “Strong, smart, opinionated, tough — all those things I like. It was kind of a fantasy relationship [between Scully and Mulder] in that it was intellectual as much as anything else.” …

It was also revealed that writer John Shiban’s son played Scully’s baby William on “The X-Files.” He was only six-weeks-old at the time of shooting, but he came out on stage looking all grown up. “He looks like me. That’s our son,” Anderson joked.

Another item of note: Breaking Bad creator Vince Gilligan, who wrote for the show for seven years, said he envisioned Bryan Cranston as Walter White thanks to a guest appearance Cranston had made on X-Files.

And that about wraps us up. People of Comic-Con 2013: You got Mulder and Scully to admit they had sex once. Presumably, you can go home happy now?