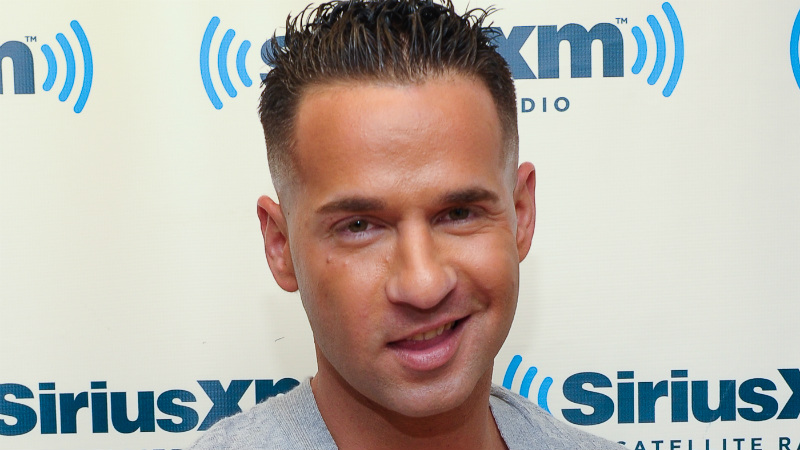 Fistfight of the Week: Mike “The Situation” Sorrentino

Now it all makes sense. The hole in our societal fabric that has become more and more noticeable is the void left behind by Jersey Shore. The Kardashians have ascended as the preeminent reality TV personalities since the duck phone stopped quacking, but the Jersey Shore phenomenon and the accompanying cultural penetration has not been duplicated since. To wit: The Situation was arrested this week after he got into a fight with his own brother, and somehow the Internet still cares. Sitch fought with his brother at the tanning salon they co-own. For those in need of some artificial bronzing, it’s a Boca Tanning in Middletown, New Jersey. There’s no Yelp page for it yet, so the quality of the establishment remains unclear, but the store does remain open until midnight, for which I commend the Situation. More service- and utility-oriented businesses — eye doctors, dry cleaners, nail salons, tailors — should be open late. Who has time during the workday for these things? According to footage captured by TMZ, the fight was over Mike’s brother’s inability to pay the employees in a timely manner. Checks issued last week all bounced. Sitch emerged with a black eye. It’s like we’re back on the boardwalk again. We really miss it.

High-Stakes Gambler of the Week: “Tobey”

Ben Affleck is not alone when it comes to absurd tales of secret gambling. Vanity Fair has an excerpt from Hollywood “Poker Princess” Molly Bloom’s new memoir, in which she details the poker games she arranged for stars like “Leo,” “Ben,” and “Tobey.” Apparently “Tobey” was the most competitive, the sorest loser, and possibly the most ridiculous. He insisted the hosts use his $17,000 Shuffle Master to deal and shuffle the cards, but he also extorted a $200 rental fee for it. She writes more admiringly of “Ben’s” poker tactics, while “Tobey” just sounds like a jerk. He tried to embarrass her by demanding she “bark like a seal” in exchange for a $1,000 chip. If you had forgotten about Tobey Maguire because Andrew Garfield is the Spider-Man of your heart, Vanity Fair will just make you remember that “Tobey” seems to be a dick.

For all their obvious flaws, the greater Kardashian clan certainly is enterprising. The sisters K are all involved in various side hustles — modeling, pushing questionable diet supplements, “running” their Dash boutiques. Kourtney’s longtime boyfriend and baby daddy is now joining the workforce, or at least attempting to. He auditioned to be the new host of Lifestyles of the Rich and Famous. The show never aired because the Style Network folded, but Scott definitely would not have gotten the job, since he comes off as jumpy and irritating in his reel. Let’s leave it at that, since it’s been a rough week for him — Us Weekly claims Kourtney and Scott are fighting again. She allegedly issued an ultimatum demanding he stop partying. It’s good advice. He needs to work on his hosting skills.

When it comes to being the wife or girlfriend of a footballer (in the international sense, not the American sense), the English truly run the game. The ladies bring as much vigor to the WAG occupation as their counterparts bring to the game itself. No woman embodies the Platonic ideal of a WAG better than Coleen Rooney, high-school sweetheart of England forward Wayne Rooney. She has been a fixture in the British press for many years, and she’s enjoying a resurgence right now — only in part because of the World Cup. She returned to the tabloid headlines because of a prostitute named Helen Wood. Wood just joined the latest cast of Big Brother, a show that remains immensely popular in the U.K.

The only reason Wood is quasi-famous in some circles is that she claims to have been part of a threesome with Wayne Rooney and another prostitute a few years ago, while Coleen was pregnant. This ignominious distinction has followed her for many years, though now it appears she’s exploiting it for gain on Big Brother, thus thrusting Coleen back in the spotlight. Coleen clearly relishes the attention, however, and even courts it. Following England’s defeat at the hands of Mario Balotelli’s Italy side, Coleen took to Twitter to defend her man. Check out this entire thread, where she lashes out at numerous anonymous people. I assume Coleen and Wayne have reached some understanding about the alleged ménage à trois, choosing to believe that Helen Wood will not divulge anything further. Coleen and the kiddos were last seen at Manchester Airport en route to Brazil, despite Team England’s official ban on WAGs. The kids were in England kits and she brought 15 suitcases, apparently trying to will a victory into reality.

Too-Cute Couple of the Week: Emma Stone and Andrew Garfield 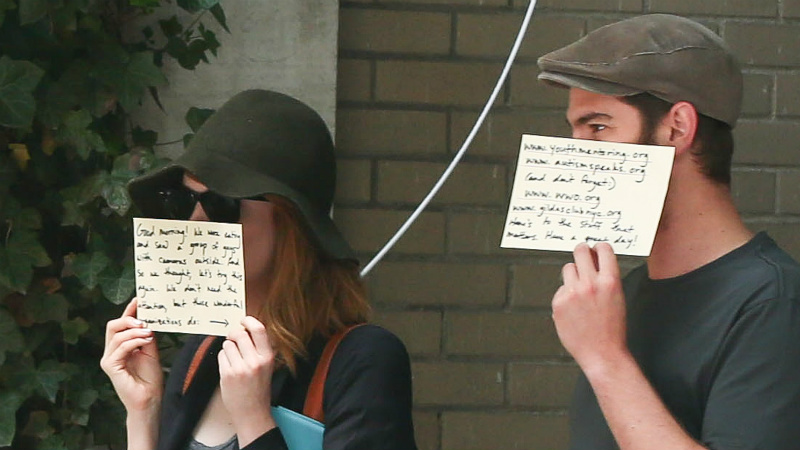 Deciding to harness their celebrity for the greater good, Emma Stone and Andrew Garfield pulled off a successful paparazzi stunt this week. The pair was photographed in New York. The two held cheery, friendly signs in front of their faces, promoting various charities in New York. Does this stunt actually benefit anyone but them, though? Sure, they raise awareness for the various charities, but I’d need real numbers to be convinced it made a financial difference. The main takeaway here is that the general public continues to think they are a delightful duo, but Emma Stone lost me when she revealed she was actually a blonde. She should have truly embraced being a ginger and never looked back.