The Week in Gossip: Hope Solo vs. Her Nephew, Lana Del Rey vs. Frances Bean, Kobe vs. Fashion 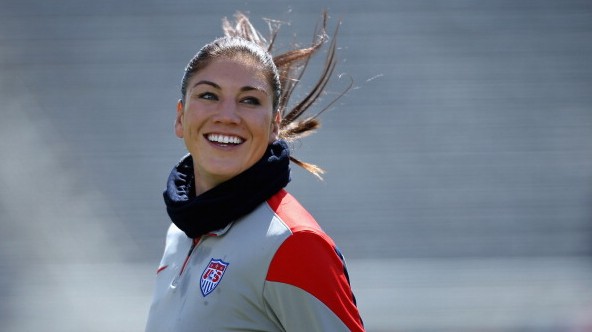 Domestic Dispute of the Week: Hope Solo and Her Nephew

Unwilling to give the U.S. men’s national team all the attention, women’s team goalkeeper Hope Solo stormed back into the spotlight this week. She got into a heated argument with her nephew that resulted in a 911 call. According to TMZ, a drunk Hope went to her nephew’s apartment last weekend after missing a flight to an unknown destination. She became “agitated” when she thought the nephew was taunting her, and things escalated from there. She said he’d never be a famous athlete because he was “fat and crazy”; he called her the C-word. Then she allegedly punched him and he allegedly pulled a firearm on her, which turned out to be a BB gun. TMZ also obtained the 911 audio, though it is far less eventful than the first account led us to believe. In any case, she pleaded not guilty and is due back in court in August.

This affair is, sadly, another chapter in Solo’s already tumultuous life off the pitch. She had a complicated relationship with her father. He got her into soccer as a kid, but he also harbored many secrets — other children and multiple Social Security numbers. She wrote about her rocky childhood in her 2012 memoir and talked about it on the accompanying press tour. The same year, she was involved in a domestic dispute with her husband (then fiancé), though all charges were dropped. Can Solo just go back to alienating legends like Brandi Chastain instead?

In the course of her publicity tour to promote Ultraviolence, Lana Del Rey reportedly told The Guardian, “I wish I was dead already.” Her comments came after discussing her influences, including Amy Winehouse and Kurt Cobain, both of whom are dead. Cobain’s daughter, Frances Bean, took exception with LDR’s casual commentary, writing in a tweet, “The death of young musicians isn’t something to romanticize … I’ll never know my father because he died young & it becomes a desirable feat because ppl like u think it’s ‘cool.’” Frances kept going:

@LanaDelRey ur too talented to waste it away.

I’m not attacking anyone. I have no animosity towards Lana, I was just trying to put things in perspective from personal experience. — Frances Bean Cobain (@alka_seltzer666) June 23, 2014

That pretty much ended the LDR-FBC feud. But of course, it lived on in the press and through subsequent tweets from Lana. She turned her rage toward the Guardian journalist. She accused the writer of tricking her in the interview, pretending to be a fan when he was actually not.

Lana has since deleted those tweets, and it seems nearly every party has moved on, at least publicly. And so shall we.

Speaking of the daughters of music stars …

Madonna’s daughter, Lourdes, will be attending the University of Michigan this fall, according to the Detroit Free Press, and she has enrolled in the School of Music, Theater, and Dance. She’ll be using the pseudonym Lola. Is it too late to pick a different nickname? Thanks to Us Weekly, all incoming U of M freshmen will know that Lola Leon is a celebrity offspring. This is an unfortunate invasion of privacy for Madonna and her daughter, particularly because Lola Leon is an excellent stage name — so spot-on that I’m surprised it wasn’t the name of a character in the updated version of Fame.

Madge cryptically posted a photo of the M Den, an apparel store in Ann Arbor, seemingly confirming the Free Press report. Her hearty support is touching, but Madge needs to reconsider the hashtags immediately. In fact, her entire Instagram collection suggests that she’s toeing the line between supportive and cool mom. Tread lightly, Madonna!

Breakup of the Week: Rick Fox and Eliza Dushku

Until very recently, Eliza Dushku and Rick Fox — she of Bring It On and Buffy, he of the Boston Celtics and Los Angeles Lakers — have been everyone’s favorite bizarre couple that you always forgot about until you were happily reminded about this unexpected pairing. Well, the sporadic glee is no more. Dushku told the Boston Globe that she had moved back to the city of Fox’s first team, while he had stayed in Los Angeles, ending their five years together. Though he had publicly dated Vanessa Williams, it still feels like this relationship had been going on for longer. She claims Boston as her hometown, and she still has family there, but she lived in L.A. for 22 years. This means she moved when she was 11. I know those are formative years, but how legitimate is that claim? In any case, she plans to go back to school. Godspeed, Eliza!

American Athlete Abroad of the Week: Kobe Bryant in Greece

After a fortnight (or so) in Brazil for the Copa do Mundo, Kobe Bean Bryant met his wife and daughters in Mykonos, Greece. Presumably he is not engaged in wooing any of the marquee free agents to Los Angeles right now. But when Kobe goes Euro, we all win. We get to see him in shorts like these.

Did he forget to pack? Did he go to the nearest store and buy those borderline Capris? Is he getting in touch with his Italian youth by dressing like a child of the continent? Is Kobe’s line of Nike clothing and sneakers completely unavailable in Greece? Is this some kind of statement on the Greek financial crisis?

Despite reports claiming George Clooney and Amal Alamuddin were considering wedding venues in England and Italy, it seems the event will occur at Cloondog’s Lake Como estate after all. Us Weekly reports that he was granted two new protection laws. It is now illegal to stop on the roads or the lake in front his house through September 30. Quoth Us, “On the lake side of the property, anyone sailing or swimming within 100 meters from Clooney’s villa could be fined up to 500 euros ($680).” If you can afford to get to Lake Como, I think the extra $680 could be worth it.

Even though we’ve lost the ladies of Teams England, Italy, Portugal, and Spain, we’ve got all the WAGs from Team Germany. Considering that includes Ms. Montana Yorke, we could not be luckier. Montana dates Chelsea forward André Schurrle. She has a killer Instagram presence. As far as I can tell, she lacks all self-awareness and doesn’t value making her bed.

She also used her social media prowess to embarrass her man. Apparently André Schurrle can’t properly tie a tie! Only one person can be the butt of jokes in this relationship, and it’s definitely not Monts.

Filed Under: Gossip, the week in gossip, hope solo

On this crucial day in U.S. history, Will Ferrell's inspirational voice is the one that can lead us to victory. (Or a tie. A tie is OK.)