The Week in Gossip: Beyoncé’s On the Run Tour Lyrics Nontroversy, and the WAG of the Week 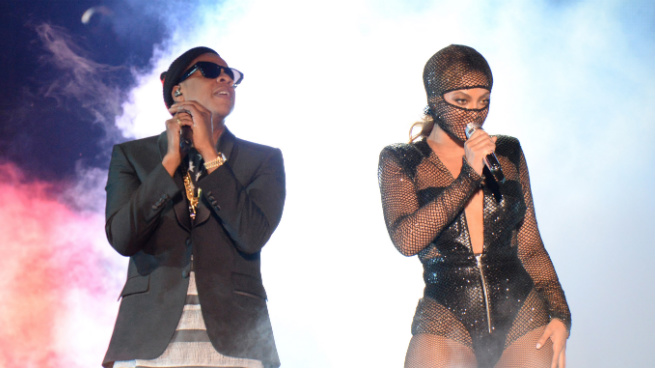 The Daily Mail is responsible for circulating a rumor that Beyoncé was referring to Mýa, whom Jay dated back in 2000. The Mail also plants the idea that Jay may be supporting Mýa, except there’s no reason to think she’s involved save for her having happened to have been with him back then. Jay Z can afford another family anyway. Beyoncé is no. 1 on the Forbes Celebrity 100 list, having earned an esitmated $115 million from June 1, 2013, through June 1, 2014. Jay is sixth, with $60 million.

Radar dropped two stories yesterday about the queen of daytime TV and her wife. First, the newly redesigned gossipmongering site claimed that Portia checked into rehab in Malibu following an explosive fight at her and Ellen’s home back in May. Supposedly, Ellen is controlling and Portia is passive. Hours later, the second story included photos of the couple vacationing in Croatia. If there ever was a rift, they appear to be on the mend. I have no proof of this, but my theory is that Radar’s second story was motivated by fear of Ellen’s wrath. There’s so little negative press about her, and her enterprise generally drips with saccharine bits. That attitude must be counterbalanced a vengeance that is unleashed only on questionable news sources.

Most Fun Vacation of the Week: Zac Efron and Michelle Rodriguez

Michelle Rodriguez and Zac Efron are on holiday together in Porto Cervo, Sardinia. They’re gallivanting around with a few friends, including Italian entrepreneur Gianluca Vacchi. He’s rich enough for a shell of a Businessweek profile, but his English-language presence is not too robust. Rodriguez also vacationed with him back in 2011, but unless there were musical hijinks, that trip was not as much fun. Zef, Mich, and Gianluca have been choreographing dances and posting them to Instagram. My personal favorite is this one set to Jason Derulo’s “Wiggle.”

Zac Efron has always had and continues to have fantastic moves.

I know the USMNT’s defeat at the hands (or feet, rather) of Belgium is still very raw. We all wish we had more patriotic day-drinking ahead of us (other than July 4, of course). But you can take solace in the fact that Red Devils captain Vincent Kompany has a world-class WAG. First of all, she’s gorgeous. (Google it.) Second of all, she’s 30 and she’s still getting carded … in the United Kingdom, where her husband is a football stud and where the drinking age is 18 but everyone seems to be a heavy drinker by birth. It doesn’t make any sense. The only reasonable conclusion is that she’s just a woman of the people, whom the clerks did not recognize. If you’re in Rio, you may see her hanging around the FIFA Fan Fest.

Happy Birthday to the love of my life! 💙VK pic.twitter.com/zBXT3UZbT4

Uncle Joey (of Full House, of course) got married. Danny, Uncle Jesse, DJ, and Kimmy all descended on Montana for the nuptials. As far as child stars and actors from the ’90s go, this group has aged incredibly gracefully. Especially the ladies!