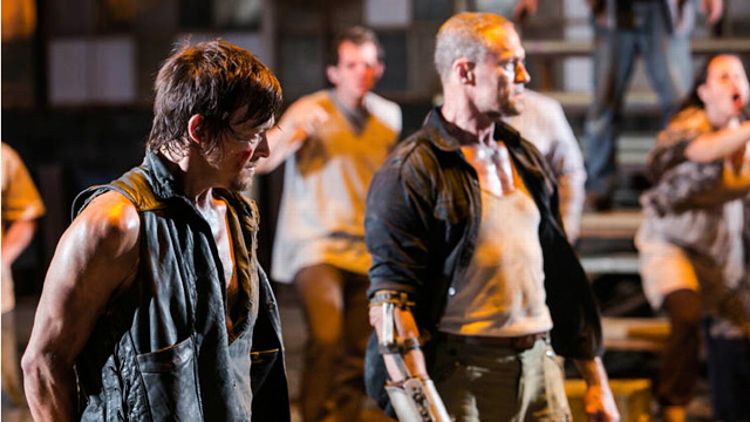 In his 2004 book The Wisdom of Crowds, New Yorker financial writer James Surowiecki argued that people, en masse, are often much more clever than they are individually. The idea is that a group, when functioning successfully, is uniquely able to synthesize a diverse panoply of opinions into a single, superior decision. At its most complex, this sort of thinking can be applied to questions of economics, politics, or even morality. At its most simplistic, it’s what allows Voltron to be a giant, ass-kicking cyberwarrior rather than a chaotic assemblage of lame robotic jungle cats.

The Walking Dead, which stumbled back to life last night after its annual midseason hibernation, strikes me as a loud and sloppy refutation of Surowiecki’s theory. For a show more devoted to the idea of “live together, die alone” than Lost — or, you know, a pack of actual jungle cats — The Walking Dead’s vision of collectivism is decidedly grim. On one extreme we have the jabbering extras of Woodbury, a faceless mob that’s gone from suburban idyll to sub-Thunderdome bloodlust in the time it takes Carl to put on his hat. On the other is an entire continent full of brainless, flesh-gobbling zombies. And, stuck in the middle, are our main characters, the gang that can’t even shoot itself in the foot straight. Honestly, it’s enough to send noted individualist Karl Marx running for his copy of Atlas Shrugged.

“When the Dead Come Knocking”

Yes, it’s never a good sign when The Walking Dead leaves its viewers — and its least-forgiving critics — enough time to start considering cognition theory, and it’s a particularly bad one when the episode in question is the first one back after an extended absence. In horror movies, the moment it’s too quiet is the moment things begin to go wrong, and it’s no different here. In fact, it’s always been thus with The Walking Dead, a show that’s at its smartest when brains are being eaten, not used. Yet after a smoky shootout in the part of Woodbury that most resembles Tupac’s “California Love” video, the still-living combatants retreated to their respective prisons, Hyundais, and tired arguments about what they can or can’t do and who they can or can’t do it with. I’d complain about the visual incoherence of that opening segment, in which not even all the smoke machines and riled-up summer-stock-theater actors in Atlanta could hide the low-budget theatrics and even worse character beats. (Merle’s plan was to beat up his brother for a while and then reveal that they were just going to escape? Why not just skip to step two?) But at least it was spirited. From there on out, it was draggy bore. “The Suicide King” took the improved momentum of the previous eight hours and promptly stalled it out on a country road.

Look, I get what’s going on here, and it works in large strokes: The Governor is a hero to the people on his side of the wall and a villain to those outside of it. Rick is … well, Rick is more or less the same. This should provide a rich vein for conflict and and drama, a fascinating framework to play with themes of morality, loyalty, good, and evil. But The Walking Dead is a show that works best in binary. It doesn’t do nuance. So David Morrissey’s Governor, who just moments ago was a charismatic, whiskey-pouring charmer, is now a snarling supervillain hissing about how “the people have spoken” and chosen bug-eyed savagery, which is just silly because the whole kumite was his idea to begin with. (Part me of wonders if a stronger actor would be able to sell this cartoon, but, you know, Willem Dafoe was no slouch either.) Yes, the man lost an eye and a zombie daughter, but such profound transformations tend to be more gradual. Just ask Andrea, who’s taken her time claiming the mantle of The Worst from the departed Lori. Still, it’s a real shame: A forgettable character who started the season as kind of a bad-ass is now stuck screaming “Philip! Stop this!” when her jump-off turns out to be a psychopath and delivering Jeff Winger speeches about “hearts and minds” to nobodies we’ve only just met. (Michonne, the Thelma to Andrea’s Louise, hasn’t fared much better. Mute glowering looks a whole lot less cool without a katana waving in front of it.)

Showrunner Glen Mazzara has received ample credit, much of it deserved, for rescuing The Walking Dead from the burning horse farm where previous boss Frank Darabont had abandoned it. And some of his better decisions were on full-display last night: Carol, a throwaway grief-bucket under the old regime, has emerged as a spunky and soulful voice of reason. Freed by circumstance and ponytail from his role as moralistic scold, Scott Wilson’s Hershel makes for a fine, fatherly consigliere. And Chad L. Coleman as Tyreese hasn’t had much to do yet, other than deliver Major Themes disguised as dialogue (“it’s only making the living less like the living!”), but this show needs all the compelling performers and halfway decent characters it can get. (Although I’d still put my money on his devious white buddies outliving him. Old horror cliches die hard on this show. Just ask Oscar.) But Mazzara is still the man responsible for the overheated mess that is Rick, now well into his fifth week bellowing boilerplate like “This is the hand we’ve been dealt!” and catching the vapors from ghost wives in the rafters. I appreciated Hershel’s stirring defense of the man who has bungled nearly every decision he’s faced, but at a certain point we need to be shown Rick’s value, not told of it. It’s a problem when the hour’s most gnarly moment involves Glenn stomping on a zombie’s skull and I empathize with the zombie.

But none of this will be Mazzara’s problem for long. In December, he and AMC announced that he would not be back for season four. The press release oozed comity, but something was clearly amiss. AMC has recently acquired a rather unsavory reputation for choosing the bottom line over the creative vision of their showrunners, and yet I have to say, in this case it’s hard to fault them. As long as something gets squished, The Walking Dead is guaranteed outrageous ratings. At this point, the show’s inability to tell a compelling story outside of “pole goes in eye” is a feature, not a bug. Mazzara did his best to hang a traditional storytelling metric on the series, but I don’t think it will take, and I think it’s high past time I stop expecting it to do so. Successful TV shows, even dark ones, survive on a downright presidential platform of hope and change. The Walking Dead — defiantly, some might say depressingly — offers neither.

No other show has the framework to be this bloody, this brutal; the end of the world and the relentless presence of ravenous zombies raise the dramatic stakes higher than the prison watchtower. But it also leaves them there, unchanging and unflagging, from the beginning until the inevitable end of the series. This, like the virus, is just built into the show’s DNA: We’ve been told repeatedly there is no cure, no hope of evolution, and certainly none of salvation. I intentionally don’t read the comics, but from everything I’ve gathered, this nihilism is lifted wholesale from them. It’s an endless third act, a gory exercise in circling the drain. In the next seven episodes, Rick and the Governor will chew some scenery, and some of their colleagues will be chewed up. By the end of the season, the survivors will be free to survive another year, or at least try to. The only thing that really matters is the unslakable bloodlust of both the zombies and their legion of couch-bound fans. Everything else — stars, showrunners, heck, even recappers — is easily replaced.

And so, with a heavy Hyundai, I hereby relinquish my weekly The Walking Dead duties. This exercise, like any good zombie, is in desperate need of fresh blood. I’ll be back to tally up the undead at season’s end. Until then: play nice, don’t bite, and if the crazy courtesy phone rings, be sure not to answer it.