The Walking Dead Season 3, Episode 8: ‘Made to Suffer’ 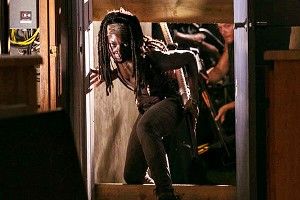 “No exit” isn’t what I was muttering to myself during the darkest days of The Walking Dead‘s dreadful second season (those words can’t be printed, even on a non-family website like this one). It’s the name of the most famous play by Jean-Paul Sartre, the one in which he coined the memorable phrase “Hell is other people.” I didn’t quite realize how relevant the sentiment was until the opening moments of “Made to Suffer,” the final new episode of The Walking Dead until February. We opened on the same familiar woods and the same old sibilant growl of the shuffling zombies. Only — what’s this? — it was an entirely new crew of skull-bashing survivors! Led by the valiant and kind-eyed Chad L. Coleman — a.k.a Cutty from The Wire, a.k.a. the guy stocking organic kale at the local food co-op — this diverse coalition was the first evidence we’ve seen of other ax-wielding good guys clubbing and stabbing their way to safety. (The goons from Philadelphia don’t count. They’re probably hunkered down in the Action News van with enough Yuengling to last till the next end of the world.) And I have to tell you: This may have been my favorite scene since the pilot. For once, the world felt bigger! And, more important, it was filled with people who weren’t the people we already knew! Sure, maybe they make some bad decisions — once one of your people gets an arm hickey, it’s time to cut and run — but at least none of them were wearing sheriff hats or droning on about nursing cattle. For too long on The Walking Dead hell hasn’t been other people: It’s been the same people.

Of course, the arrival of Coleman’s Tyreese meant more than just an exciting infusion of fresh, thus-far-uncontaminated blood. It also meant curtains for poor Oscar. (I’m beginning to think Jenner must have also whispered something about a rule for one African American male speaking role per episode back at the CDC.) And while I was sorry to see Two-Dogg go — I assume he’ll be eulogized in February as the greatest man who ever lived, an athlete capable of running sub–Paul Ryan marathons and also the inventor of the polio vaccine — it did highlight the characteristic, unique to The Walking Dead, that has provided Glen Mazzara with the ability to spin AMC’s moneymaking Hyundai 180 degrees: On this show, no one is safe and anything can happen. Yes, there’s a cynical reason for this — meat is at a premium since zombies aren’t exactly going to go vegan — but it also presents a wonderful opportunity for Mazzara to tinker with energy, chemistry, and tone. I’d imagine showrunners on more hidebound series are snapping their jaws like little Penny with jealousy: Just think if they, too, could simply murder the parts of their shows that weren’t working! (Sayonara, Chris Brody! Hasta la vista, Andy Bernard!) Not liking a group of characters on The Walking Dead these days is like not liking the weather in San Francisco: Wait a few minutes; it’ll change.

“When the Dead Come Knocking”

I’d even wager that Mazzara was reading a little Sartre himself — or at least listening to a touch of Bettie Serveert — because it’s not just new faces on Team Grimes that have enlivened his show, it’s the emergence of threatening figures outside of it. “All this time running from walkers, you forget what people do,” is how a shirted Maggie puts it as she huddles with a bloody, topless Glenn. Humans, it’s worth remembering, aren’t only more interesting than zombies, they’re a hell of a lot more dangerous, too. They’re trickier, faster, and have considerably better palates. A zombie can gnaw on you, but only a human can stab you in the throat with a recently extracted forearm. I actually thought Tyreese may have been signaling The Walking Dead‘s smart new direction when he answered his pal’s concerns about entering the back of the prison (“We don’t know what’s in there”) by saying “We know what’s out here.” The binary that has defined the show up until now — us vs. them, living vs. dead, crossbows vs. foreheads — is dependable but overly familiar. Better to focus on humanity’s violent, unpredictable struggle to stay afloat than on the lapping, biting waves that threaten to inevitably overtake it.

I only wish we could move this leaking-boat metaphor someplace other than Woodbury! I find it to be a silly, tiring place, filled with bloodthirsty extras who couldn’t shoot the side of Hershel’s barn. Last night proved that the Governor’s wifty villainy up until now was intentional: This was a guy clinging to his vestigial goodness like Andrea refusing to swap her thongs for something more sensible. But the CliffsNotes version of his evolution grated. Michonne got her semi-revenge — and little Penny got a sword through her throat — but the Governor’s new eye patch is as lazy a signifier as Carl’s two-gallon hat. (Also, I sincerely hope Mazzara backs off on the Governor’s whole “terrorists” angle. The Walking Dead tossing around a term like that is like giving baby Judith a shotgun. It’s a bit too provocative for a show better at smashing brains than using them.) And don’t get me started on Andrea herself, whose judgment has gone completely to shit ever since she let the Gov into her Bad Idea Jeans. Do you really want to keep snogging a guy currently weeping blood over his dead monster baby? Why hitch your wagon to a lunatic sitting in a pool of fish head soup instead of the scowly woman who literally carried you for eight months? Of course, that silent confrontation with Michonne at swordpoint was also undercut by the fact that the show basically yadda-yadda-ed their entire relationship. That, or I guess Andrea just values bourbon more than buddies.

I also wasn’t sold on Rick’s commando raid. I’m not sure whether it was a budgetary thing or director Billy Gierhart getting smoke in his eyes, but the entire confrontation looked remarkably cheap and ugly: all machine gun pops, convenient timing, and head-scratching hallucinations. (I assume Jon Bernthal just wanted to get his copy of the Deen Brothers cookbook back from Andrew Lincoln. Why else would he be hanging around the set just to get shot again?) And the twist at the end suggests that Merle is going to end up on the side of the angels before too long, which is kind of a bummer. (Unlike black actors, there’s no rationing of rednecks, it seems.) But I’ll admit that the presence of his stumpy brother does bring out the best in Norman Reedus’s Daryl: When he lied to Rick about being “with” him over Merle, it was possible to glimpse the scared kid behind Daryl’s tough, owl-slaughtering exterior.

Despite the problems, The Walking Dead heads into the holiday hiatus in the best shape of its afterlife. With the emergence of Tyreese and the impressive rehabilitation of Daryl and Carol (who isn’t a lesbian, much to Axel’s creepy glee), Mazzara has actually managed to provide a few survivors I’m invested in seeing stay that way. And the conflicts ahead will at least be between characters, not creaky ideologies and straw men and wives. (A year ago I would have made a joke about AMC’s “be a character on The Walking Dead contest” being besieged with entries from the current cast, desperate for a little depth. Now I’m just cheaply stashing it in a parenthetical.) For me, the real takeaway from the first half of Season 3 isn’t Lori’s gruesome, fan-servicey death or the Governor’s bare-bottomed debut. It’s what happened to Hershel. Long before that chillaxing zombie feasted on his fatted calf, the miracle veterinarian was poison to the show. But the lesson of his survival is the same one Mazzara must have learned after seeing Frank Darabont get whacked. With a show like this, no matter how infected things get, you can always lop off the affected areas. And on The Walking Dead you can feel free to keep on cutting until you get it right.