The Walking Dead Season 3, Episode 7: ‘When the Dead Come Knocking’ 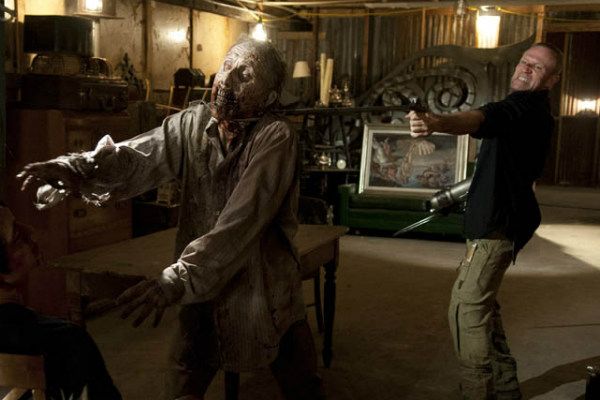 Even a zombie partisan would agree that The Walking Dead tends to save its surprises for the ends of things: seasons, lives, our patience. So it was noteworthy that last night, in the penultimate episode of the first half of the season (the show will return in February), I counted three genuinely exciting shocks. Even better, none of them involved a new breakthrough in decapitation technology. (Though thanks to gross-out guru Greg Nicotero, they’ll likely be on the cutting edge of that field for years to come.) There were no sudden stabs in the back or twists of the knife. (OK, thanks to Michonne and Andrea there were actually both of those things. But work with me here.) Instead, “When the Dead Come Knocking” found time amid the steady diet of scheming and slaughter to get weird. And no matter the show, when things get weird, they tend to get interesting. This is particularly true for a cable series about a world-ending zombie plague that hews closer to expectations and gender roles than a CBS procedural about a lady lawyer.

The Walking Dead is certainly unconventional in its bloodthirsty savagery. But 10 million viewers a week ought to buy the producers more than a tanker truck full of Karo syrup. It ought to afford you some room to experiment. And yet, if you strip away the violence and extremity-slashing extremes, the show very often resembles that inexplicably pristine Hyundai, driving a straight and narrow line through a deeply strange and suggestive landscape. So while the rest of the country was still digesting its 19th turkey sandwich, I was thankful for a risk-taking script (by freelance scribe and sometime actor Frank Renzulli, pictured here looking amazing in The Fighter) and some better-than-expected performances from actors used to playing second fiddle to latex-lathered extras. For once, The Walking Dead managed to make me feel something outside its tried-and-true triangle of adrenaline, revulsion, and boredom.

Surprise no. 1 was Glenn’s Guantánamo-esque goring of a loose walker. Steven Yeun, like his character, has been game for anything these past three seasons, but much of it has been irritatingly lightweight. To everyone except Maggie, Glenn is the throwaway, the bet worth taking because the loss is survivable. (The nadir came last season when his friends at the farm treated him like Borat treats Jews in Kazakhstan.) Finally, in Woodbury’s interrogation dungeon, Yeun was given the chance to play a man more hook than bait and he rose to the challenge. Don’t get me wrong: The Merle of it all was typically frustrating. In fact, I’m having a hard time getting over how badly the show has whiffed on its introduction of human villains: Neither Merle with his cartoonish racism (poor T-Dogg: slandered even in death!) nor the Governor with his pasty smarm appear to have more depth or charisma than the typical brainless biter. But as soon as Merle pulled his best Dr. Evil and left Glenn alone to be killed by a laser-shooting shark zombie, the episode came alive. Here was something we hadn’t seen before: close combat with real stakes and a desperate ferocity on the part of a survivor that felt considerably more palpable and real than Rick’s recent video-game act in the prison. Kudos also to director Dan Sackheim for letting the enormity of Glenn’s feat breathe for a moment after the (intrusive) music crescendoed; a rare opportunity to exhale on a show usually predicated on making the audience gasp for air.

Surprise no. 2 came from the bowels of Milton’s research lab, which turns out to be not another gnarly aquarium stocked with skullfish, but a repurposed rec room stuffed with knickknacks and the sound of big-band music in the air. Not even the presence of Andrea — whose fall from potentially interesting to The New Lori™ is unprecedented on modern television (seriously: from sharpshooting to girlish giggles and thong shots with a creepy psychopath? I’d be a lot more invested in the looming “civil war” between the prison and Woodbury if the writers made even a halfhearted effort to make her either smart or sympathetic) — could ruin this oddball digression for me. I loved everything here: the crackle and hiss of the record, Mr. Coleman’s ghastly, pre-dead visage, the Tibetan singing bowl (!). Finally, a nod to the unadulterated oddness of the situation! Finally, an attempt to understand the world, not stab it in the brain-pan for maximum splatter! (Although, to be fair, that did happen, too. Rest in pieces, Mr. Coleman!) Milton’s sheltered, only-childish attempt to lay scientific order over the violent chaos of the post-virus reality seemed a lot more earned to me than the Governor’s Mayberry-at-gunpoint vision of utopia. Andrea’s curt declaration (“There is no unconscious mind, Milton. When they die they become monsters”) felt more invasive and fierce than any crossbow bolt. We’ve seen a lot of the hopelessness of physical defeat — we saw it again last night in Maggie’s luminous, terrified peepers — but what Milton suffered was even more devastating: the sudden realization that the impossible is all that’s left, the total surrender of the mind.

I’m afraid I must interrupt this love-fest for a moment to address the supposedly fearsome Governor. Is this leering toff really meant to be a more deadly opponent than a herd of zombies? Clearly we’re headed toward horrifying things, but at present I’m unsure if the character is a misfire or merely miscast. Currently, I’m leaning toward the latter. David Morrissey conveys as much menace as he does carnality; he’s a wet noodle when he ought to be sharper than Michonne’s katana. His icky treatment of Maggie — a strong Lauren Cohan — was meant to be disturbing, but it came off as dim and depressing. He didn’t feel credible as either a rapist or a murderer; he was just a manipulative creep. As the weeks go by, it’s becoming harder to understand just why a lunatic like Merle is following him, let alone a town full of non-devoured simpletons.

But back to the countdown. Surprise no. 3 was the one I least expected: There were moments of genuine emotion among the old farmhouse gang, characters I had given up on as either leveled-up avatars or future zombie kibble. Look, I’m not blind. There were still tons of problems in the traditional Walking Dead style, among them Hershel’s remarkable ability to treat gunshot wounds as if they were feverish cattle and Michonne refusing help — or explanation — in her best Batman voice. The entire interlude in the cabin was preposterous. (Was Hobo Joe sleeping off a whiskey drunk when the world ended? Or just mourning his puppy? And if there were no zombies in the backyard, why did they need a distraction on the front porch? Just go!) But here’s the trick about TV: Make us care about the characters and the nitpicking tends to subside.

Case in point: One of the least-heralded changes in Season 3 has been the toughening up of Carol, a fortysomething survivor who has been having the worst week ever since her mid-twenties. Melissa McBride’s warm performance elevated her mostly wordless reunion with the gang into something quite affecting, particularly her crumpled brow at the sight of the newly widowed Rick. We’re meant to understand that everyone still alive has lost somebody. But Carol, as a character, is defined by loss: her husband, her daughter — hell, her hair. I appreciated the too-rare opportunity for The Walking Dead to show us an earned connection between two people, not lecture it into our heads.

The same thing occurred, in a smaller way, with Daryl. Because The Walking Dead tends to privilege cool over characterization, the sensitive redneck’s transition from ear-collecting loner to loyal friend has been relegated mostly to the background. Recently, though, it’s been brought back to the fore. Last week there was a decent scene between Daryl and Carl, commiserating over dead mothers, and now Rick coughed up rare words of thanks. “It’s what we do,” Daryl replied, which was both nice and patently untrue: What you usually do is hunt owls and frown! But if this sort of familial kindness is what you do from now on it’ll be a good thing, especially as we teeter toward some sort of fratricidal mid-season showdown. The whole point of zombies, as Milton learned last night, is that one is indistinguishable from another: They all want the same thing and they all die the same way. The Walking Dead is better served when it remembers that humans are more successful, not to mention interesting, when they’re unique.