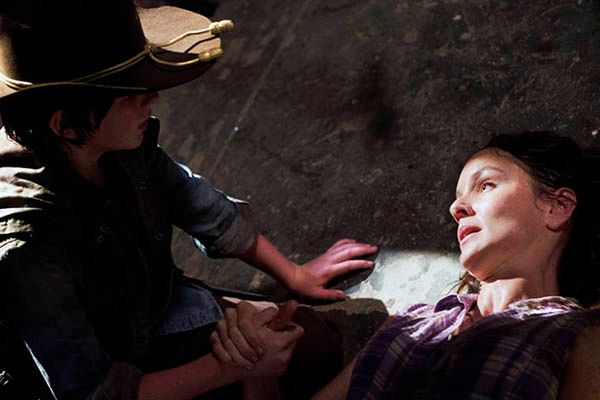 Obviously, the show’s ratings — more monstrous than a cell block full of zombies — prove that plenty of people love watching The Walking Dead. But other successful series that thrived on violence have managed to make the darkness seem occasionally seductive, if not outright appealing. There’s a moral escapism to aspects of The Sopranos and Game of Thrones that’s an undeniable part of their success. No one would really want to be Tony Soprano or (god forbid) pissy King Joffrey for more than a day, but there’s something to be said for the opportunity to wallow in an intoxicating proximity to power on a weekly basis.

This is not the case with The Walking Dead. Four episodes into this bleak third season, showrunner Glen Mazzara’s greatest accomplishment may have been bringing the series in line with its setting: It’s an unapologetically grim and horrific show about a grim and horrible world. Not even the most shower-averse among us could possibly pine for a second spent in this blood-soaked hellscape, where the dead want to eat you and the living come at you with axes, and where the only hope for happiness is five minutes of filthy floor sex in an abandoned, death-haunted prison tower.

This tough refusal to provide anything close to a respite from the nearly nihilistic bleakness is probably why The Walking Dead is at its best when it reduces its narrative to the same, primal fight-or-flight instinct it demands of its survivors. All of the non-adrenalized bits in “Killer Within” struck me as needlessly clunky, from Rick and Daryl’s gory yardwork right through Andrea’s weirdly sappy, definitely clueless meet-cutes with both Merle (the two passing notes in what appeared to be the set of the Beth Littleford Interview) and the Governor. (Note to Mazarra: David Morrissey, unlike much of the cast, is talented enough to sell a sinister mix of charisma and cruelty without the need of Villainy 101 clichés like shagging golf balls in an apocalypse.) While Danai Gurira was still given little to do other than wear cool gloves and glower, Michonne intrigues me because she alone seems to realize the nature of the show she’s on. No one, not even a widower bearing good whiskey, can be trusted. And if you’re going to die — which, come on, you totally are — you might as well do it on the scenic Georgia seashore.

Unlike last season, Mazzara doesn’t let the show stay bogged down in these dull moments. On The Walking Dead, any second not spent killing is really just killing time, and where Frank Darabont preferred to burn entire episodes clearing his throat, last night established quite clearly what Mazzara thinks of throats. What the new showrunner seems to embrace is an awareness that the secret sauce in any horror flick is inevitability; it’s what keeps us peeking through our fingers even in supposedly quiet scenes. And so it was with “Killer Inside,” although it wasn’t the somehow-still-alive Andrew’s venison-fueled vengeance that tipped me off that things at the prison were about to go completely FUBAR. (Quick question: How was his a good plan? Or a plan at all? If I were alone and starving in a zombie-flooded wasteland and had somehow managed not only to procure an ax but also to successfully hunt and kill a 10-point buck, I would definitely be grilling up some delicious steaks, not indulging in overly complicated reindeer games!) Nor was it Hershel — now with 50 percent less leg but 20 percent more ponytail — sagely stroking his beard and remarking how the corpse-strewn jail was “starting to look like a place” in which they could really live. The real giveaway that all hell was about to break loose was the sudden emergence of T-Dog’s personality.

Few recurring characters have done so little with so little as IronE Singleton’s mostly mute zombie stabber. And so nothing that happened last night — I repeat, nothing — surprised me more than his sudden break with Rick over the treatment of not-terrible prisoners/future walker-fodder Axel and Oscar. As he correctly tells his more talkative colleagues, he “never stopped” sleeping with one eye open. So why should they exile two others who, while technically far from innocent, haven’t shown the slightest inclination to harm them? On The Walking Dead, the moment a character reveals a hidden depth is probably the moment before they’re treated like a novelty turkey leg at a Renaissance Faire. When T announced, out of nowhere, that God has always taken care of him and thus he was happy to receive the gnarliest hickey of all time in order to save Carol, it once again made me sad that The Walking Dead invests so much more time designing the demise of its characters than it does bringing them to life.

But as befits a character always treated as second-class, T-Dog’s dismemberment was overshadowed by a much more outrageous death last night. And the fact that it’s taken me 900 words just to get to the part of the episode that everyone is talking about reveals my ambivalence. To recap: In an act of perfect TV karma, Lori goes into labor while on the run from a swarm of walkers. In the relative peace and lack of hygiene of a boiler room, she realizes “something is wrong” and insists that Maggie cut the baby out of her, likely ending her life. With a level of uterine gore not seen since Prometheus and a dash of Oedipal agony unimaginable even by Sophocles, this is precisely what happens.

Now, in the short view, there is a part of me that admires the unblinking savagery of Mazzara’s vision. As appalling as everything that happened in the boiler room was, it certainly was consistent with the miserable universe The Walking Dead has created, a place where tough choices are inevitable, pain is unavoidable, and life — particularly young life — is to be protected at any cost. All actresses, inevitably, are asked to perform an agonizing birth scene at least once in their careers, and Sarah Wayne Callies was excellent here. For once, her innate fierceness was used for something other than accusatory snark; in her wide-eyed and desperate good-bye to her son, there was a hint of the ferocious and protective warrior/mother the character could have become with better development and more thoughtful scripts.

As quick as I’ve been to label Lori Grimes one of the worst protagonists on television, the intensity of fan hatred has continually given me pause. There’s a depressing undercurrent of misogyny to a lot of the reaction toward TV wives these days, from Skyler White to Cat Stark. It’s something I’ve been guilty of harping on as much as anyone. But a large part of the blame rests in the writing, the perpetual creation of an impossible dynamic wherein the cool husband wants to do fun and/or violent stuff and the snippy wife is always trying to harsh his mellow. As a TV fan, I wasn’t unhappy to see Lori Grimes go. And the atrocity of it all brought out the best in the normally wooden Andrew Lincoln and certainly made the burden on young Chandler Riggs — who, thus far as an actor, has proven to be all hat and no cattle — even greater. But the exact way she went out was an even greater bummer than the irritating scold the character had become.

Lori’s final words to Carl, before sacrificing herself in front of his young eyes, sounded to me like an unnecessary apology, not a loving good-bye. “It’s so easy to do the wrong thing in this world,” she moaned. “If it feels wrong, don’t do it. If it feels easy, don’t do it.” What she was referring to, of course, was her utterly reasonable decision to bed down with Shane, a trusted and caring family friend, amid the looming horror of the end of the world. Her ongoing guilt and suffering for this is and has always been outrageous; surely a reality in which burying a machete into a man’s widow’s peak is a heroic act can forgive a little post-traumatic nookie. There’s a difference between the admirably unforgiving worldview Mazzara is trumpeting elsewhere and downright cruelty. There were plenty of reasons for Lori Grimes to die; it’s a shame that her capital offense turned out to be the simple act of being alive.