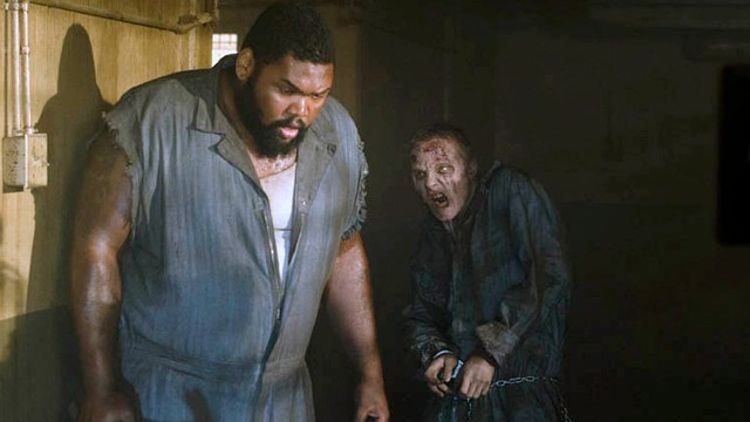 At some point, amid the unrelenting gore and Pollock-esque blood spatter of last night’s episode, my mind began to disassociate from my body, like Hershel’s fatted calf being cleaved from the rest of him. The Walking Dead has wisely transitioned from farm to slaughterhouse in Season 3 — forget zombies; judging by the insane ratings, we are a nation of fetishistic vampires — but the resulting intestine-revealing intensity doesn’t give the weak-stomached among us much to latch onto.

And so, as Carol and Lori splashed around in the munificent geysers of Hershel’s potentially infected plasma and Rick and his new crew of edgy inmates attacked the cell block with reckless, stabby abandon, my mind drifted high above the prison and its seemingly endless allotment of murderers both living and dead. Instead, I focused on the sounds. What is it, exactly, that The Walking Dead’s audio engineers use to so perfectly suggest the fatal collision of spongy brain and cold steel? What industry technique have they mastered to differentiate the hardy gush of a spear piercing the brain pan of a reanimated felon and the softer, more feminine squelch of a lead pipe penetrating the rotten eye socket of an innocent, expired townie?

As the potentially endearing recidivist Big Tiny was beaten to death by a ghoulishly grinning Tomas, I decided it was overripe cantaloupes. What else could provide such a distinctly organic, visceral squish? So when Rick buried his machete deep inside Tomas’s untrustworthy widow’s peak, I was miles away, imagining a nondescript recording studio off Lankershim Boulevard where a coterie of well-paid union men were lovingly smashing melons in front of plastic-wrapped microphones. These highly trained fruit ninjas were the real heroes of The Walking Dead, I decided, scouring the Santa Monica Farmers Market at dawn for pulpy produce and spending their downtime watching Gallagher videos on YouTube for inspiration. No matter what dippy dialogue dribbles from the survivors’ lips, the crew of The Walking Dead never ceases to go above and beyond the call of duty in the noble pursuit of grossing you out.

As for “Sick” itself? Well, it was aptly named. Even without the doomed, Resident Evil shenanigans of the chain gang — and the even grodier mess they left behind in the walk-in fridge — there was plenty to cringe at here, from Carol’s operating theater rehearsals (which suggested post-apocalypse TMZ’s go-to hashtag, #zombieupskirt) to Hershel’s ominous slide into death and its black-sheep cousin, undeath. I took it as either a sign of mercy or a creaking budget that we were spared the sight of Tomas’s lieutenant Andrew being torn apart like string cheese. Even with that particular demise left to our overtaxed imaginations, the show’s savage new direction has freed FX guru Greg Nicotero from his creative handcuffs more completely than the newly-hands-free zombie in cell block C.

Behind the scenes, though, it’s still possible to envision Glen Mazzara and his team of writers taxing their own melons in a different sort of way. Rick’s all-out heel turn is fascinating to watch and, in many ways, quite believable for a man who’s had the worst week ever for an entire calendar year. He no longer needs empty absolution from his wife — “Not for one second do I think there is malice in your heart” — because he knows better than anyone the violent nihilism tucked away in his ticker. And also because, days away from welcoming an innocent baby into this nightmare of a world, he reacts to Lori’s beseeching, outstretched arms like they belonged to the legless horror in the pilot. Don’t get me wrong: A decisive slab of vengeful beefcake is a far preferable main course to the soggy plate of waffles we were given last season. But I do hope that someone, be it the suddenly empowered Carol, the quietly impressive Maggie, or a bird flu–addled Daryl (owl sashimi isn’t FDA-approved), steps up soon to provide a much-needed voice of loyal dissent. Rick’s so desperate to secure the perimeter — any perimeter! — that he’s forgotten just what it is he’s so eager to protect.

And then there’s The Walking Dead’s most terrifying monster, Lori Grimes. Since a crossbow bolt through the forehead isn’t an option (yet) it’s now possible to feel the producers hacking at the poisoned bits of her, like Rick performing an emergency amputation. Still, her on-the-nose mea culpa last night felt a lot more like fan service than character saving; “I know I’m a shitty wife and I’m not winning any mother-of-the-year awards” could have been cut and pasted off of any random Chud.com comment thread from the past 12 months. I think the writers are in an impossible position here, as is Sarah Wayne Callies. For every dramatic good deed Lori is given to rehabilitate her lousy image — last night it was her selfless, actually-pretty-foolhardy decision to put her mouth flush against Hershel’s potentially bitey piehole — there’s the inevitable backslide to who she used to be. In this case, it’s both letting Carl wander off again and then scolding him for his bandage-procuring heroism. (Unlike Andrew’s shred party in the yard, sparing us the extended adventures of Carl Grimes: Infirmary Explorer was definitely an act of mercy.)

At the end, Rick’s rough rebuff of Lori’s litigious gallows humor (“We’re awfully grateful for what you did”) was meant to make her more sympathetic, but really it just left me disliking them both. All of the show’s secondary relationships have surpassed this central one in terms of spark: Maggie and Glenn, Carol and Daryl, hell, even Axel and Oscar, forging bonds of brotherhood over a raging corpse fire just a cell block away. At this point, with the terror cranked up to 11, the familial discord rings true but feels hollow. Blood runs thicker than water, yes. But on The Walking Dead the blood doesn’t stop running long enough for me to care.