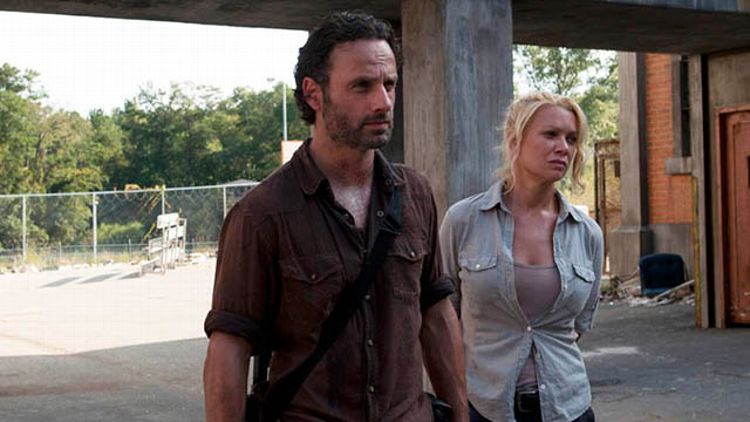 The nature of television is less casual than it used to be, with media requiring more and more of a commitment from viewers, as well as offering more opportunities to indulge in meta-programming and shield themselves with spoiler-protection masks, reinforcing the bonds between audience and serial. It’s immensely gratifying, but it can also be daunting for an outsider. I hadn’t seen an episode of The Walking Dead until last night, at which point I decided that I’d gone on for too long bluffing that I’d seen it when people asked me at parties, too daunted by the backlog to start from square one. I jumped in, Googling only to get the character names I couldn’t catch (baby Judith, I heard your name as “Sudoku”), without prejudice or the knowledge of how so many people lost eyes and limbs. It was disorienting, especially considering that Walking Dead fans are a pretty enthusiastic bunch and that even if you commit yourself to watching every episode, there’s still a comic book to tackle. Starting with Episode 30 felt a little like breaking the rules, but it reminded me of the experience of stumbling into something without expectations, without the queue and the space on the sofa meticulously cleared for a very long sit. It was refreshing, like a mutual and pure no-strings-attached fling: If it works out, it works out. If you hate these zombies, hey, man, no sweat.

A quick disclaimer: I find zombies to be the least terrifying monsters because they remind me of stoners, and stoners are my friends. My husband told me that zombies were one of his ultimate fears as a kid, because “they do nothing but try to eat you, and they’re already dead.” He also compared them to coyotes, in that a single zombie is usually an indication of a hidden pack of zombies; whereas a vampire can outsmart you or seduce you into submission, the terror of zombies is that they travel en masse like a slow-moving scary bulldozer and eventually overpower you. The suspense of a zombie pursuit comes from the frantic but futile darting around you do as a herd of beings stalks you like snails on Valium. You have ample time to go through all of the psychological stages of accepting your own death/future as a zombie as you slam doors behind you to find another zombie hiding behind the credenza, sprint through the forest just to encounter four zombies as soon as you think you’re in the clear, eat a final sandwich, write three quarters of your memoir, etc. It’s sort of undignified to be overtaken by a zombie, like dying of an infection stemming from a stubbed toe or choking on a cheeseburger. When your best weapons are your wits, I guess it’s only fitting that when they fail you you’re doomed to spend the rest of your days asking for brains. However, this is also why zombies are the best villains to encounter at a random plot entry point: Their unique histories are irrelevant. They aren’t defined by their memories or experiences, they don’t seem to hold grudges or have interpersonal relationships. They are, essentially, robots without an off switch.

My interest was initially piqued by a scene in the “previously on” segment during which a person vomited blood on his companion while having what looked like a pretty casual conversation. By the time we opened on Rick, the leader and the man I know to be our hero because the first rule of jumping into a show this late in the game is that the opening scene’s characters are always the protagonists, especially if they paint themselves as underdogs, it’s clear that this is going to be the story of not just man versus zombie, but man versus man, and also man versus himself. Rick is not only the weary leader of a ragtag crew up against a powerful nemesis (the Governor, who has the “guns and the numbers” and is also “a prick”), he’s “slipping” and everyone can see it, especially Old Man Willoughby (they call him Hershel, I call him what I want).

There’s a regular Whitman’s sampler of angry or resigned characters under Rick’s tutelage at the cell block fortress: Merle, who has replaced his missing arm with a bayonet and masking tape; Carl (Rick’s son), a precocious child dressed up like a stupid baby cowboy; and, of course, Old Man Willoughby and his missing leg. Rick excuses himself from the squabbling over how to handle the threat of the Governor’s insurgence to take a walk with his gun, staring out at the loitering undead Walkers through layers of binoculars, singing cicadas, and chain link, and contemplating his enormous moral responsibility. Carl approaches him and tells him that he should retire as leader and relax. Because I’m not well acquainted with Carl, he seems like an evil third-grade soothsayer, like a modern-day Bill Mumy at a zombie rodeo.

By the time the scene flips to Woodbury, the relatively civilized base of the Governor and Milton (evidenced by ceiling fans, knickknacks, refrigerators), there’s even more opportunity for creative extrapolation because the Governor has an eye patch. Because I may never know what happened to his peeper, I’m going to create my own b-plot and decide that he contracted conjunctivitis from a filthy male-prostitute zombie named Scat with whom he tangoed in the ravaged remains of New Orleans. He had to rip out his own eye because he knew that the Biter’s strain of pinkeye would quickly spread to his brain. Andrea, the resident tough-girl heroine who apparently managed to cache her curling iron during the zombie apocalypse, enters the Governor’s lair and gets sassy with the Governor about a shooting at the prison, saying that she’s going back to visit her former friends at the cell block to try to make peace. The Governor tells her that if she goes to the prison, she can’t come back. Andrea’s character may be my first complaint about The Walking Dead, because she plays everything so casual and eye-rolly that it’s easy to imagine her reaction shots have been transplanted from a PTA meeting in Parenthood.

Back at the prison, it’s clear that there’s unrest among the inhabitants. They can’t agree about what to do with their ammunition or how to cope with the numerous, oft-referenced deaths that have occurred among their crew. Hershel and Merle chew the fat about their missing limbs — Hershel lost his when Rick chopped it off to save his leg after he “was bit” — and as the two trade Bible quotes like baseball cards, I grow momentarily bored and decidedly unafraid. I wonder about the pacing of shows like The Walking Dead, and if there has ever been a television program that requires monsters in every shot. Would it numb you, for instance, if you saw a pair of glazed eyes peering at Merle and Old Man Willoughby from the cell block wall and realized that a zombie had been painted into the scenery as if it were in a Gotye music video? Merle finally tells Old Man Willoughby that the Governor is going to kill them all, saving Rick for last. This is when the draw of this show becomes clear: As with any grand and dramatic modern fable, it seems to be an endlessly refreshable game of investment/collapse. There are so many characters to keep track of that loyal viewers are essentially asked to predict who will live, whom to invest in, and whom to sacrifice as zombie brunch. Coming in late to the party, you’re cold and callous. The references to the body count warn you to not get too attached to anyone right away. The rules that were still being written in Season 1 make it clear enough that you shouldn’t grow too fond of baby Sudoku.

Woodbury’s militia-building scenes hint at something promising that grabs me as a horror fan: An army of “child soldiers” with patchwork backward denim hats and BB gun experience fighting a slew of zombies is a pretty good hook. As is the Governor removing his eye patch to reveal a wet raspberry of a wound and holding a lit match up to it as though he’s thinking of sticking a birthday candle directly into the socket. But it isn’t until we follow Andrea and Milton into the forest that we get some serious human-on-zombie violence, and I have to say it was pretty gratifying, if that’s what you’re all about (and if you’re watching The Walking Dead, that’s probably what you’re all about). In a woodsy setting, they really are like coyotes: As Andrea amputates a Biter’s arms and then stomps on its head while its teeth rest on a rock, another corpse starts staggering toward her, and then another. When a fellow gang of zombie-fighters materializes chasing a Walker who looks like she may have formerly been Meg White, I’m again asking myself what’s so chilling about a nemesis you can just sit on and hack at with a knife? But the show’s grip on me grows tighter throughout the episode, and by the time the prison crew starts pitching that Andrea kill the Governor (“you chose a warm bed over a friend”) after a schnookle session, I’m kind of hooked.

As the episode trickled out to Tom Waits’s “Hold On” and Andrea stood over the postcoital sleeping Governor with her knife in hand, wrestling with whether or not to slice him (she couldn’t; I mean, who could, when Tom Waits is growling tenderly at you?), I played the What Does It All Mean? game. Because of my unfamiliarity with The Walking Dead’s tone and, I think, my tendency to take things more seriously than intended, I find myself wandering into metaphor territory with this show, asking myself why zombies are such trendy, groaning emblems. Is it how we’re aging, the realization that our bodies and brains aren’t offering us the option of an extended warranty? Is it the slow pace, the inevitability and compromised quality of life without the pressing urgency of a more rapid kind of violence? An isolated episode of a show with a world that’s so rich (and yet kind of campy) can make even the mundane seem unnerving — I imagine a single serving of American Horror Story would be an even more extreme example — and isolate what you thought were somewhat benign monsters into more thought-provoking expressionistic ideas of fear. A single dose of something strange makes it even more unfamiliar, and I don’t even know if I want to find out why Carl was dressed like a cowboy. Sometimes it’s just creepier not to know, and to leave it up to your nightmares to decide.