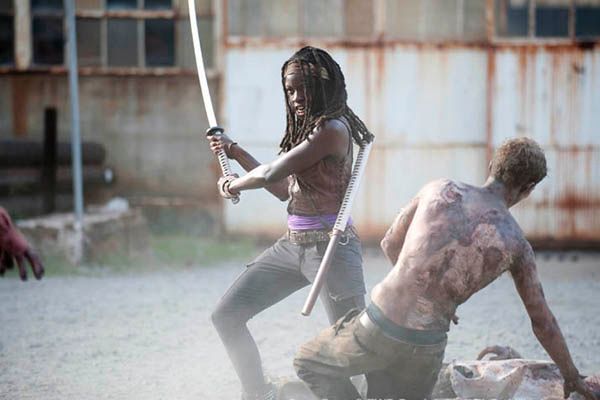 [Ed. Note: We’re gathering questions for a TV mailbag! Send your television-related queries to Andy Greenwald at grantlandtvmailbag@gmail.com and he will answer the ones that strike his fancy in the not-too-distant future.]

One of the more interesting ideas that The Walking Dead has grappled with in its third season — more interesting to me, anyway, than the continued investment in clean, skull-splitting technology — is surrender. In a ruined world where half the population wants to bite you and the other half wants to trap you in some sort of MMA Mayberry, the only way to endure seems to be to give up. Of course, not all white flags are the same. “Say the Word,” a reasonably solid hour, offered two paths of least resistance. You can be like Andrea and the rest of the former Crabapple Books shoppers in Woodbury, and give yourself over entirely to a beautiful fiction: all cold lemonade and Kid Rock on the loudspeakers, just pay no attention to the zombie orthodontist with a knife for a hand. Or you can be like Rick and let the blood-red waves wash away whatever traces of humanity still remain. Like his growling, lipless adversaries, Rick has become a thoughtless killing machine. And also like them, his violence masks a hunger that can now never be sated.

Rick’s complete retreat into an FPS fantasyland was plenty grim but also sadly necessary. As anyone who noted Michonne’s gorgeous, body-bisecting knifework could tell you, The Walking Dead works best in extremes. For all of last season’s horse-manure-laced disquisitions on the nature of civilization, it was equally important that the show provide a real sense of the alternative. For The Walking Dead to succeed with stakes this high, it can’t always be about keeping the monsters out. Eventually, some of the horror has to slip in. And Rick’s wound isn’t like Hershel’s — it can’t be hacked away. So while I found the confrontation with the ever-patient Glenn a little trying — if people in real life grabbed each other by the throat as much as they do on TV, crushed windpipes would be a preexisting condition — I appreciated the disintegration of our once-stalwart leader. Rick is neither human nor walker now; he’s a third rail. When Jenner whispered that the living were already infected with the virus, who could have guessed that this would be the result?

(Still, because I am not a professional zombieologist — I went to a hippie school where you couldn’t major in it — I do need some clarification here. Rick made it to the boiler room, yes? And there he found the floor stained with his wife’s blood, as well as the shell from the bullet Carl put into her brain. So, then, where was Lori’s corpse? And who was the fat biter posted up against the wall? Was the implication that the zombie was Lori? Or was that the thing that ate what was left of Lori? Regardless of what you say, my answer is going to be “Ew.”) (UPDATE: I am told that the fat zombie was digesting Lori. BRB going to yak forever now.)

Over in Woodbury, the Governor is being groomed as the perfect foil for the newly ruined Rick, and not only because he spends his evenings grooming his undead daughter. (Poor Penny! When I was a kid I didn’t have to put a sack over my head until after I finished watching cartoons.) If the sight of Rick burned away any illusions our original survivors have about what they’re up against, those same illusions are the Governor’s stock in trade. Everything about Woodbury is performance, from the idyllic Main Street to the roaring torches ringing the town Thunderdome. (All that was missing was a zombie T.J. Lavin to say “You killed it, bro — literally.”) Andrea, now that she’s cured of her fever and her temporary bout of common sense, will argue with anyone about anything, but I found the Governor’s reasoning persuasive: Toothless boxing matches help shine “a light on the monsters under the bed” and teach the citizenry “not to be afraid.” Andrea’s right that people should be afraid of flesh-eating zombies. But what good does it do anyone in the near-term? Life is brutish and short on The Walking Dead. Is it better to spend your last months (or minutes) with your eyes lulled shut by the Governor and his delicious supply of Georgia microbrews, or to have them forced fully open by the ax-wielding misery of Rick? Either way, choosing to be blinkered and half-assed about it isn’t going to cut it anymore.

Speaking of cutting, Michonne came here to do two things: chop dudes with a katana and glower at … Oh, sorry. She actually has plenty of time to do both. Look, I’m still all-in on this character if only because Danai Gurira is such a charismatically physical performer. But The Walking Dead has a serious problem with bringing its African American characters to three-dimensional life. We’ve learned more about T-Dog (R.I.P.-Dog!) in the hour since he was dismembered than in the previous 23. It’s the laziest kind of telling-instead-of-showing to have Glenn eulogize an amazing, churchgoing hero that we never had the slightest opportunity to know. (“He wasn’t just a good guy. He was the best!” Sure! And Jacqui received a MacArthur Genius Grant for best personality!) And the way all of the white Woodburians talk about Michonne is even worse. “She wouldn’t do that unless she felt threatened,” says Andrea. “She makes people uncomfortable,” says the Governor. Are they talking about a person or a pet? I have higher hopes for Oscar, the stalwart prisoner cleverly (and sadly) referred to in the comments last week as “Two-Dog.” When he commiserated with Glenn over the fallen — “I think I had one friend like that my whole life. You got a whole group” — it suggested that the Grimes Family Industrial Complex might be something for him to join or improve; that the “normal” bits of life worth protecting or restarting aren’t just something for other people to enjoy and him to resent or to die for.

With the wider conflict lines being drawn for the inevitable Woodbury/Prison clash, it fell to Daryl to worry about the little things. For some time now, Norman Reedus has coasted on a wave of fan approval because he at least seemed cool, even when he wasn’t doing very much. This week Daryl earned top prize not only for his fetching taste in ponchos but because he took the necessary action to keep Carl’s new little sister alive. Obviously anyone who chooses to ride that motorcycle believes in the importance of symbols, even when they’re totally counterintuitive and far-fetched. So I believed him when he drawled, “We ain’t losing nobody else.” The baby is a baby, sure, but it’s also a metaphor for the impossibility of their plight. So if a few opossums need to die — and a few fashion outerwear laws need to be broken — so be it. Whether it lasts or not, I appreciated his temporary claiming of the hero mantle. It’s less complicated, and thus more enjoyable, for him to be saving the day while Rick is falling to pieces. And when the sensitive redneck fed the nameless baby (unless you think “Lil’ Asskicker” is going to stick) a bottle full of potentially expired Similac, it prompted the first genuine smiles since Hershel debuted his midlife-crisis ponytail.

How things play out from here feels balanced on a machete blade. The Governor’s “Dictatorship for Dummies” notebook and Rick’s apocalyptic white courtesy telephone suggest that camp — not salvation — lurks just around the bend. And the skeptic in me wondered why Glenn, Axel, and Oscar spent all that time digging graves when there weren’t any corpses to bury. But that’s an inconsistency for which both gore-spattered Rick and the immaculate Governor would have an easy answer. If you’re unhappy with the body count in The Walking Dead, just consider it like the weather in San Francisco: Wait a few minutes and it’s likely to change.