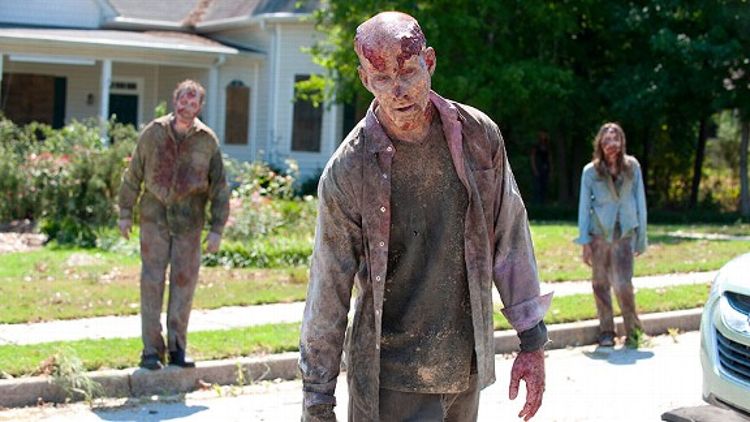 Last week Grantland’s estimable Senior Hot Tub Hookup correspondent David Jacoby was kind enough to fill in on Walking Dead duties while I was away. In the recap, he took the time to elucidate exactly what it was he enjoyed about the show, namely “explosions, hot chicks and creative ways to kill zombies.” Let’s be clear: That sounds pretty good to me! Unfortunately, at this point, The Walking Dead is about precisely none of those things. Instead, it is about a group of shallow, unpleasant people who live on a horse farm.

In its condensed six-episode first season, The Walking Dead managed to introduce the core characters, unite them, and have them travel to Atlanta and back (twice!) before reaching the CDC just in time to see it self-destruct in a fiery explosion of shower soap and corked red wine. At the same point in Season 2, our sweaty survivalists have spent five hours looking for a little girl we don’t even remember in the first place. I have seen lateral passes with more forward progress than this show. It’s not that a timeout on the guts and gore isn’t a good idea — it’s just that after spending hour after endless hour with these ridiculous people as they repeat the same arguments about leadership and child-survival odds, it becomes more and more clear that your average maggot-infested walker has more going on internally than any of the protagonists. Last night was particularly wasteful: tossing perfectly good chickens to the secret zombies in the barn and emptying hundreds of bullets on tin cans.

I suppose training heretofore unseen characters how to shoot makes sense, but until recently wasn’t ammunition at a premium? What do they plan to defend themselves with once the inevitable happens — beef jerky and peaches? “Be prepared” is as good a motto for a zombie-riddled apocalypse as it is for the boy scouts, but for these dudes, spending time ventilating milk bottles is as productive as Noah mastering the doggy paddle. This is a hit TV show with bigger-than-life stakes — maybe it’s time to aim a little higher? Sugar Shane’s empowerment camp for target practice and remedial misogyny is burning through ammo almost as quickly as the producers are using up the audience’s goodwill.

Still, in fairness, one or two concrete events did happen in “Secrets,” chief among them the revelation that recent advances in large-animal medicine have far outstripped their human equivalent as Carl was up, mobile, and shooting guns just days after being plugged by one himself. (With an impossible feat like that under his belt, maybe Dr. Cornpone really can cure zombie-ism. “Just listen to two more soliloquies about ‘men of character’ and call me in the morning.”) Also, miserable Lori remained miserable, spilling more tears over her surprise pregnancy than Carol has over her still-missing daughter. She also sent poor Glenn back on another errand to town, this time to pick up some morning-after pills (helpfully labeled “morning-after pills” to avoid confusion). Unfortunately for Glenn — and for Maggie’s tank top — the pharmacy either gained a zombie infestation since last time or maybe the creeping tom was just bummed that he wasn’t going to get another live sex show and decided to take it out on someone.

Luckily, Glenn is quick with a wooden shelf and even quicker with a machete, as he rescues his occasional girlfriend with a more vicious necking than the one she gave him. It was the episode’s only moment of clarity, both as a visceral rebuke to Herschel’s sentimental theory that these peckish monsters are still human and an opportunity for Maggie to tell Glenn the truth: that he’s more than genial walker-bait. (He’s also an efficient salesclerk, taking the time to package each item he takes from the drug store in its own individual white paper bag. Servicey!)

If Glenn is slowly developing into a real hero, the rest of the cast is quickly moving in the opposite direction. Shane may be angry at himself, but he’s ugly when taking it out on the fairer sex, screaming, “You’re too damn emotional!” and “You shoot like a damn girl!” at Andrea when she’s unable to shoot a moving target. (In fairness, it’s a flirtation strategy that pays carnal dividends. After a pointless home invasion in search of Sophia — this show’s impossible white-girl whale — culminates in some brain-splatter, Andrea is excited enough to grab’s Shane’s package on the drive home. Unfortunately for Dale, what happens in the Hyundai Tucson doesn’t stay in the Hyundai Tucson.)

Actually, women in general were treated as less than human throughout last night, from Herschel’s smug, sexist proclamations (“Be grateful you don’t have a daughter. If things were only as simple as wanting to learn to shoot.” Yes, if only!) to Glenn’s invocation of the holy “don’t women’s periods tends to synch up when in a group?” bunkum. (The constant threat of the undead ripping your loved ones limb from limb got you down? Must be that time of the month! Am I right, fellas?) Whether it’s Lori’s hysterical pregnancy or Otis’ widow’s suddenly ravenous appetite for Glocks, the message was clear: Someone needs to protect these poor, helpless women, or at least keep them in the kitchen cooking up Dr. Herschel’s former patients. (That “Secrets” was written by the talented Terriers vet Angela Kang suggests that this is an institutional problem, not a personal one.) Lori’s over-the-top anguish over the secret bun in her oven made me want to stick my finger down my throat long before she did. Still, at least she has some perspective: When Dale mused that Lori’s been reunited with her loving husband so “what’s your concern?” she correctly points out that they are marooned in a death-scarred zombie apocalypse and child-rearing is low on the list of priorities. Luckily for her, so is petty jealousy. The episode’s non-climactic ending featured the over-simmered revelation of her past with Shane. Rick, the calmest cuckold in history, takes it well, claiming he already knew and walks off, thus taking a rare pass on an opportunity to explain how he’ll do anything for Lori and Carl.

The Walking Dead is literally going nowhere, its stunted storytelling so egregious that it’s bordering on the satirical. (Next week: Daryl begins individually carving maps of the surrounding areas into each tree in the forest in the hopes that Sophia might find it, and T-Dogg sends Glenn back to the pharmacy for some gum and a 5-hour Energy Drink.) It’s unclear whether the pace was slowed due to the tumult at the top — we’re nearing the end of the episodes produced before creator Frank Darabont got his own wooden shelf to the neck, professionally speaking — or due to monetary constraints (not even Korean car sponsorships can bring the budget back to where it was before Matt Weiner got his new contract), but something has to change, and fast. It’s maddening that the only zombies remaining on The Walking Dead are safely locked away in a barn, stumbling in stultifying circles and feasting on chickens instead of the bitter, brittle bones of Lori or any of the other miserable humans who so desperately deserve to be devoured.