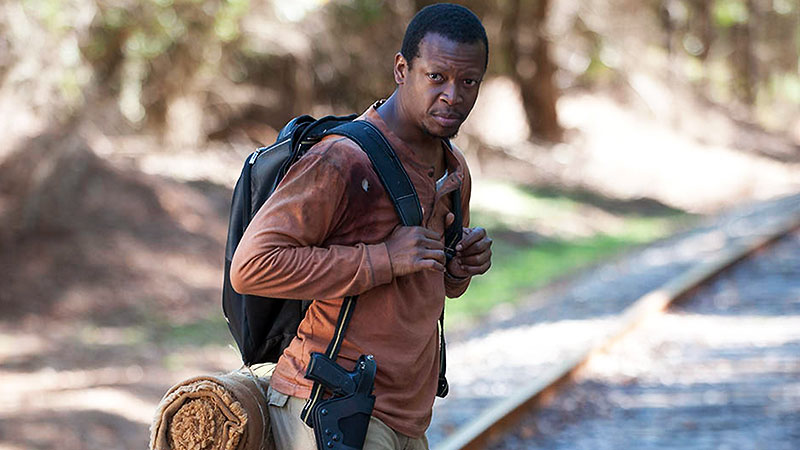 Had a problem with your HBO Go last night, pardner? Well fear not, because there’s plenty of room around the campfire at Ranger Rick’s Old-Timey Zombie Roast. Pull up a seat and cool your heels: We ain’t going nowhere. Not for a while. Nope, folks ’round these parts prefer a slower pace to life, so a man can share where he’s been — “develop his character” as them big-shot Hollywood writer-types put it. And if you get a little antsy, missy, you can borrow my crossbow and go corpse huntin’.

With just three episodes remaining this season after last night’s episode, it’s clear The Walking Dead will take its damn time getting to “Terminus,” whatever that might be. And as long as the show continues to outdraw TV events like the Olympics, it can do as it pleases. (NB: Ellen’s Twitter-breaking Oscars actually bested TWD’s ratings last week. The beginning of the end? Probably not.) Sunday’s “Alone” was yet another episode built on an essentially inessential plot, and it looks like I’m not the only one who’s fidgeting while watching the emotional paint dry. At least we weren’t stuck at Beth’s moonshine slumber party again this week, though. The jailbait vibe still lingered, but as far as awkward romances go, Daryl and Beth had competition this week, which leads to our first question.

What About Bob 2: The Search for More Bob?

Apparently The Walking Dead wants to perfect the low-to-no dialogue music video cold open, because yet another episode started with a relatively wordless intro, this one chronicling the adventures of D’Angelo Barksdale Bob Stookey before Daryl and Glenn found him swilling Nyquil on a backcountry road. To his credit, Bob did answer the group’s Three Questions correctly: Yes, he’d killed one person, but only because she’d asked him to. As a reward, he got to ride in the back of Glenn’s pickup, wearing the sloppy grin of an abandoned pet who’d just found a new owner.

But the main action found us once again on the long and winding road, this time primarily with Maggie, Sasha, and Bob, the latter two of whom had been busy making kissy faces at each other while Maggie focused like a hawk on finding Glenn. After a brief Zombies in the Mist interlude, which found the trio attacked under cover of fog by some nimble walkers, the focus shifted to Bob and Sasha’s postapocalyptic flirtations. And when the three came upon the now agonizingly familiar sign pointing to Terminus, these lovers’ blood-soaked stars became crossed.

No Woman No Cry?

Bob and Maggie decided their best shot at finding Glenn would be heading toward this mysterious sanctuary, but a skeptical Sasha said she’d rather roam the zombie-strewn countryside aimlessly. Given her experiences with the Governor, “sanctuary” is probably a very loaded term for Sasha; still, her firm stand felt like a puzzling and, of course, contrived conflict. Even when Maggie ditched the pair to follow the tracks on her own, disemboweling stray walkers along the way to make zombie street art and leave messages for Glenn, Sasha stuck to her guns despite Bob’s lovelorn pleas.

Eager puppy that he is, Bob kept following Maggie with a reluctant Sasha in tow until they reached a town. Apparently, Sasha’s alternative to sanctuary is gentrification. Spotting an abandoned warehouse by the tracks, she pleaded with Bob to stop and help her convert it into an overpriced loft/vegan co-op — and he pleaded with her to keep on walking. Finally, saying, “I’m going to try something here,” Bob planted a big kiss on Sasha’s stunned/confused lips in one last attempt to get her to come with him. As any awkward high school freshman can tell you, those words and that strategy never work. So, Bob kept on rambling down the tracks, leaving Sasha alone with her exposed brick walls, pondering where to put the Bose speakers.

But just as she was guesstimating how much it would cost to redo the windows, Sasha spotted Maggie on the ground below, a flock of hungry Walkers bearing down on her, which led to a tear-filled, corpse-splattered reunion. Now, before I could truly grasp the improbability of Sasha stumbling across Maggie at random like that, the two talked out their issues in a dialogue so incomprehensible — was Maggie’s plan to trick them into thinking she didn’t want to be followed? — that I zoned out until the obligatory, smile-filled Kodak moment came when Bob and his girls reunited.

Is There Such a Thing as “Underage” During the Apocalypse?

I couldn’t stop asking myself variants of this question as this week’s B story picked up where we last left off with Beth and Daryl. Sadly, Beth’s dead-inside eyes have been brought back to gooey, sentimental life by Daryl’s firm grip on that crossbow. Gone are the days when she callously tallied eaten-alive exes like so many nervous teenagers in line at the DMV. Maybe it’s just me, but as much as I individually like Daryl and Beth, an uneasy shiver crept up my spine as Daryl taught her how to use his crossbow. I guess if multiple generation gaps mean nothing to sugar daddy billionaires and gold-digging playmates, Beth and Daryl’s 20-odd years shouldn’t bother me. But seriously, isn’t she 17? Now, discussing the efficacy and endurance of social norms like this is an intriguing question that only a show like The Walking Dead could raise. I just wish the writers would evince a bit more awareness that back here in pre-Zombie America, this pairing counts as officially “skeezy.”

Yet to the show’s credit, whether intentional or not, this plot is making me the most tense I’ve been all season. When a spare bear trap sprained Beth’s ankle, forcing her and Daryl to take shelter in a seemingly abandoned mortuary, my stomach churned at the thought of what these two would get up to unsupervised by things like adults and social norms. Sure enough, Daryl and Beth’s burgeoning feelings bubbled up thanks to a Lorde-esque piano solo by Beth and a “white trash” feast of pigs’ feet and diet cola that Daryl laid out for her. With Daryl struggling to articulate his confused (and in some states illegal) feelings, the two lovebirds were interrupted by a knock at the door. In an act of monumental stupidity — which the writing staff tried to sell by having a stray dog pass by the house earlier — Daryl casually opened the door to a herd of walkers. I’ve lost count of the laziest ways to spark a zombie swarm this season, but this deserves a top-10 mention. However, it did lead to a pulse-raising set piece in which Daryl ingeniously used a couple of gurneys to wiggle away from the brood of ravenous walkers. Alas, he made it to safety just in time to see Beth’s backpack in the middle of the road and a creepy anonymous car speed off into the night with Beth in it.

Heartbroken that someone truly nefarious had kidnapped his child-bride, Daryl followed the road until it forked. Demoralized and despairing, he sat down in a funk, only to come into the path of the same Anonymous Evil Gang that had terrorized Rick so effectively a couple of episodes ago. Never one to talk through his feelings, Daryl silently drew his crossbow, but that only earned the approbation of “Joe,” the Anonymous Ringleader, and an invitation to join their predatory, postapocalyptic flash mob. Daryl lowered his weapon, and I breathed a sigh of relief on behalf of social norms everywhere. Beth is safe for the moment, and Daryl can sublimate those verboten urges with the expected orgies of violence that probably follow these guys like the trailing toilet paper stuck to your coworker’s shoe.

For all the meandering and turgid emotional beats this week, The Walking Dead still knew to throw us some red meat. While not quite comparable to Rick’s silent escape from his bedroom and bathroom foes a couple of weeks ago, Daryl’s madcap mortuary adventures provided some undead flair. His double gurney fake-out juke showed that Daryl has a promising amateur rugby career in his future if this zombie stuff ever gets sorted out. However, Maggie was this week’s winner by a mile. Making the best use of a downed parking sign in the history of downed parking signs, Maggie swung her impromptu halberd with medieval confidence to shave a walker’s head clean off.  It was an executioner’s stroke worthy of Game of Thrones.

‘SNL’: Lena Dunham Brings a Voice of a Generation to Studio 8H

"Brad Pitt smells amazing, like nothing I’ve ever smelled. Eventually we ask what cologne he’s wearing and he tells us, ‘I don’t wear cologne, it’s just my musk I guess."