‘SNL’: Lena Dunham Brings a Voice of a Generation to Studio 8H 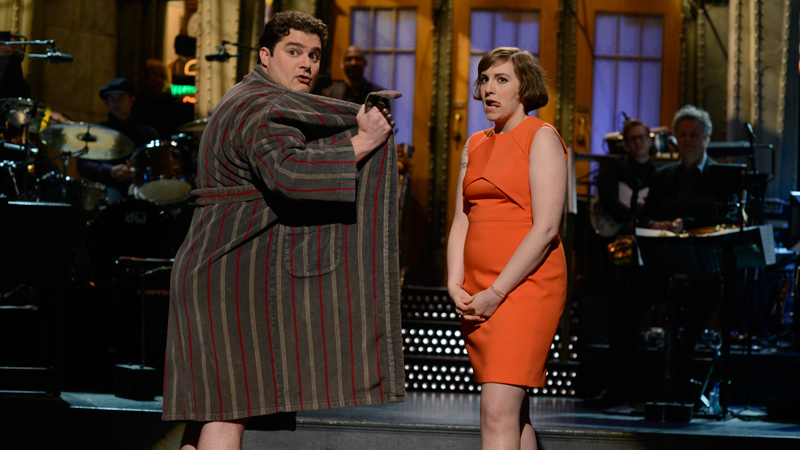 I was not in the mood to watch SNL this weekend, finding it really incongruous with my 48-hour plan to just wander around unshowered, talking to passersby about True Detective and seeing little Carcosas everywhere. Lena Dunham’s Girls has been a casualty of True Detective, or at least this is my theory: It is now more difficult than ever to be interested in the dating/professional/existential concerns of twentysomethings, when all your cares have been bought up by the McConnelsons. Your brain only has so much HBO-designated real estate for sale. Girls — and Dunham’s body, and Adam Driver’s appeal, and what the voice of a generation has been saying about that generation — has been a talking point for so long that now, in the show’s third season, all the gripes and accolades feel redundant. But whatever problems I have with Girls don’t extend to Dunham herself; her response to criticism of the show has been thoughtful, she stands behind what she’s created in an admirable way, and she’s cool yet assertive when the world deals her a heap of bullshit. She’s honest even when it’s unpopular, naked when she feels like it, unapologetically herself.

“Herself” is exactly who Dunham played for most of Saturday night’s broadcast, but as was not the case with last week’s host, Jim Parsons, it worked in her favor. In her monologue (which followed a cold open featuring Liam Neeson), Dunham addressed a side effect of Girls’ nudity and sex scenes (“Seinfeld had the puffy shirts, Home Improvement had the neighbor talking over the fence, and we have very graphic sex scenes, that’s our thing”): strangers approaching her with unprompted confessions about their intimate lives. Vanessa Bayer showed up to dump some knowledge on Dunham about Bayer’s boyfriend’s choice of car (sadly not an Escalade but a Mini Cooper, with one tire “weirdly smaller than the other”), Aidy Bryant shared the story of losing her virginity on a merry-go-round, and Bobby Moynihan parted his bathrobe to ask if he had the right number of … something (“I feel like I have too many, or maybe way too few”). Everyone should probably have deferred their concerns to Grandma Dot (Kate McKinnon), who at 94 years old has more expertise than Dunham when it comes to getting down. (In the ’40s, when all the cool young ladies were going to third base, Dot was “cool as hell, practically a third-base coach.”)

After a solid (but not standout, despite its weird twist ending) pretaped segment that featured the host as the only passenger in a full car to be interrupted while singing by an inconsiderate GPS system, Dunham got one step closer to living her dream of appearing on Scandal. As newly hired gladiator Kelsey, she was equal parts giddiness (after witnessing Sasheer Zamata’s Olivia Pope receiving a caress from Taran Killam’s Fitz Grant: “OK, that was the president of the United States, how are you not texting like 1,000 people right now?”) and green-employee real talk (oops, just accidentally opened GarageBand). It was like televised fan fiction — which is a compliment — even if Zamata struggled to give Pope her due. It’s forgivable, considering the amount of dialogue she had, and she made up for any deficits with her whole-face quivers under Killam’s presidential hand.

Also enjoyable: “Biblical Movie,” hot on the heels of Son of God and Noah, which set Hannah Horvath and Adam (Killam) in the Garden of Eden. Blurry genitals, apple-shaming and Shoshannasnakes (Bayer) may be enough to “make God say, ‘Whatever,'” but this was a pretty great way to handle all topical Girls issues in one place. The Garden of Eden is actually exactly like your first postcollege studio apartment: filled with moral problems, rotting fruit, and yelling at the ceiling. If you’d prefer to hark back to the days of cohabiting with your parents, then I recommend “What Are You Even Doing? You’re Being Crazy,” a “Girlfriends Talk Show”–type skit featuring Nasim Pedrad as Marissa and Dunham as her buddy whose name I’m pretty sure was Brendall. Having both hit puberty mere hours before, Marissa spends her four televised minutes being consumed by her sweater, while Brendall battles some strain of sniffles that I think were related to her orthodontia. (Props to Dunham for very realistic just-tightened-braces acting.) The ladies entertain guests, of course (though each gets assaulted with giggly “Why are you here? It’s INSANEs” and accusations that they are stalking the hosts’ whole lives), including the captain of the soccer team (Kyle Mooney) and, in a strange but welcome cameo as himself, Jon Hamm (who wonders if the setup is “a Dateline/Chris Hansen thing”). Perennial college student/basement dweller/older brother Brett (Bobby Moynihan) doesn’t get much screen time, but if this segment repeats itself, I’m starting a campaign to make it “The Brett Show.”

One of the highlights of the night was brought to us by “Weekend Update”: Taran Killam as Matthew McConaughey was such a treat that it completely upstaged a visit from Fred Armisen (who made the trip across the hall to reprise his role of [X celebrity’s] friend from childhood — Putin, on this occasion — flanked by Vanessa Bayer). What with McConaughey telling Colin Jost (a.k.a. CoJo) that “the conductor’s holdin’ my hand, and he’s teachin’ me lessons I can’t learn ’cause I only read braille … tactile” and leading everyone in a chest-thumping rendition of the Inspector Gadget theme song, this probably deserves a few minutes of your time.

Dunham had some clunkers to soldier through as well, though nothing so bad as last week’s dookie elevator. “What’s Poppin’,” a hip-hop talk show hosted by Lil’ Taint Anthony (Jay Pharoah) and LeGod Williams (Kenan Thompson), featured Dunham, Cecily Strong, Aidy Bryant, and Mike O’Brien as a Sprite-guzzling musical group called That’s a Rap and dressed them all up like bicycle-riding English teachers from 1991. The names alone (Lil’ Taint Anthony! LeGod Williams!) deserved something a little snappier than this — I mean, it’s no “What Up With That?” Another lukewarm talk show in a night full of fake talk shows was “Pimpin’ Pimpin’ Pimpin’ With Katt Williams: Oscar Edition,” though Dunham’s take on poor Liza Minnelli was fun (as was the shout-out to sponsor Dr. Thaddeus Moonbeam’s Extra Stanky Hair Weed, “weed that your hair smokes so that it can relax”). I understand that making fun of Williams is an easy gig (Drake recently offered his take) and that Jay Pharoah does a particularly great job at it, but I think it’s time to chill on the impersonations until there’s a reason to be talking about him again. Dunham’s most vexing assignment was probably “Jewelry Party,” in which she played the host of the titular get-together, which was attended by a heavily accented Latina woman named Marisol (Strong) and her men’s activist boyfriend, Bruce (O’Brien). It was just a punishing premise from the get-go. Dunham flubbed a line while explaining to Marisol why it was actually a bad thing that Bruce had shut down two Planned Parenthoods, changing “low-cost” to “low-cal” and (very expertly) recovering by explaining, “I’m so upset right now!” Diet birth control is a pretty good idea, though. I’m going to take that on Shark Tank.

Luckily, Dunham was spared an appearance in a dead-end video short (stop sucking, video shorts!) and was left to say her goodnights by expressing a wish to French kiss everybody. It was a good show on the whole, and I’d look forward to seeing Dunham come back to host again — hopefully before the third season of Women, during which Jessa escapes to a pottery commune in New Mexico while the rest of the characters have a midlife-crisis sleepover at a time-share in Boca Raton.