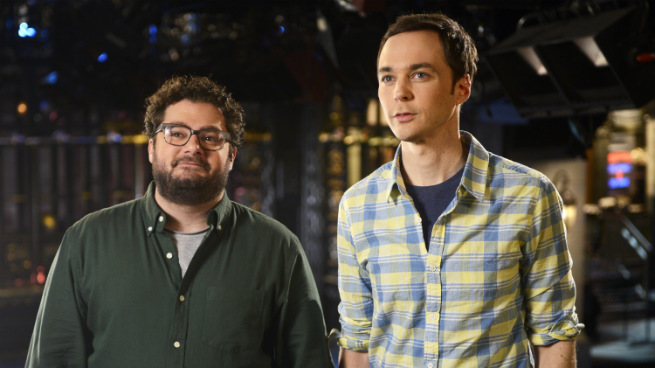 Sheldon Cooper is pretty much the prize at the bottom of The Big Bang Theory’s cereal box. A socially inept dork who encompasses all the tropes of the type — LARPing, Trekking, preferring to engage brain-to-brain rather than body-to-body (one might say he’s unofficially on the spectrum) — Cooper has still become bigger than Big Bang and more than the sum of his “Bazinga!”s, and most of the credit there is probably because of Jim Parsons’s portrayal of him, a role that has won the actor three Emmys. It’s not only the job that Parsons is known for now, but one that may define him for the rest of his career. He’s lent his name to an asteroid and a monkey, and his catchphrase to an orchid bee.

While that’s nothing to sniff at, it didn’t make the Saturday Night Live writers’ jobs easy this week, and as a result, first-time host Parsons was confined to variations on uptight, Sheldon-like characters who would have been more interesting had they been given a little more pizzazz (or, you know, pizzinga!). Even his dancing serial killer was understated! Maybe that’s why I so appreciated the silliness of “The Bird Bible” and another bang-up “Weekend Update” appearance by Jebidiah Atkinson (Taran Killam). If things don’t work out with new “Update” anchor Colin Jost, I think old Jeb should just take his seat and refuse to leave.

After a brief stint as ever-dapper Johnny Weir guesting on Ellen during the cold open, Parsons took the stage for a musical monologue during which he reminded us that he’s “not that guy” (Sheldon), he’s a “well-adjusted man, not a Star Trek superfan.” Assisting in making this point were character/actor confusions Urkel (Jay Pharoah), George Costanza (Bobby Moynihan), Jessica Fletcher (Kate McKinnon), and the Fonz (Killam), as well as Bill Cosby, who actually is that guy. Normally I’m not too fond of the musical monologues, but the revolving door of character actors kept this one from dragging (and lessened the load on Parsons, which is nice for a first-timer).

It probably doesn’t bode well for my host assessment that one of my favorite sketches includes this one, in which Parsons (as Peter Pan) was upstaged mightily by Aidy Bryant as Tinker Bell’s half-sister, Tonker Bell. But you know what? No one would have stood a chance. Tonker Bell is filling in for Tinker, and though she’s got the fairy dust, it resides in her posterior (“What up, my ass is here”). I’d be down to get Tonked every Saturday, and though it was a shame that Parsons didn’t get to shine here, it’s nice to see Bryant continue to flex her muscles, tiny and fairylike as they were.

I can already hear you disagreeing with me on this one, but I really dug Parsons as the bespectacled, lurky murderer Marc Allen Henry in “Dance Floor Killer.” All he did was look like a creep as he crashed the jolly sets of Soul Train and Dance Party USA in a khaki windbreaker, casing the room for victims with his mouth in an evil straight line. Then again, I have yet to dislike any art that contains “Da Butt” — it’s catnip to me. Marc being paired with Debra Messing on Dancing With the Stars after his prison release kind of reminds me of Issei Sagawa’s post-cannibalism freelance career. Let’s not ever do this, America. Let’s keep our serial killers dancing behind bars, and away from Tom Bergeron. He’s seen enough craziness in this world already.

“SPOTLIGHTZ!: Acting Camp for Serious Kids” is back, starring Vanessa Bayer as wee Laura Parsons (from the venerable Return to Pizza Island and Home School Dropout), saluting the Oscars. Whether reenacting Dallas Buyers Club or Gravity, Parsons gave his take on the young actor who can’t resist mouthing his scene partner’s lines. You know that actor. You may even have been that actor, especially circa 1993 in a drama lab doing Our Town (shhh! Nobody needs to know, you’ve burned your parents’ VHS). I enjoyed how Parsons was able to subtly convey an inner battle of a person who was trying not to do this horrible thing but couldn’t quite put a lid on it. And hey — no dropped lines! Unlike Pharoah, who got so wrapped up in his Shaq impression at the “Update” desk that he prompted Kenan Thompson to cue him. A for effort, character whose name I couldn’t quite decipher. You’ll be returning to camp next year and bunking with Sasheer Zamata, who turned Captain Phillips into a musical for half a second.

It wasn’t all giggles, however. I really, really, REALLY could have done without “Elevator,” which punished Parsons by giving him the role of a man who shit his pants after hearing a loud noise while seated in his office chair (and then carrying his soiled underwear into a crowded elevator before prompting him to shit them again). Whatever praise I’ve heaped on the past few episodes’ toilet humor — sometimes it worked! — I now take back reluctantly because things have gone too far. When your punch line is a janitor remarking that the elevator environment “smells like old dookie in a bag and new dookie in pants,” we have reached a crisis point. We have to imagine ourselves 10 years (hell, 10 days) in the future and tell ourselves the story of Now, and reverse this weird trajectory.

There were other misfires, though less egregious: Despite funny moments, the parade of white guys auditioning reluctantly for 12 Years a Slave was too uncomfortable to be worth it, especially considering SNL’s recent racial conundrum. And while “Murder Mystery” seemed to have a great setup (these things are comedy gold mines), the sketch ran out of steam a fair distance before its conclusion. But hey, just as long as nobody’s solving a murder while holding a Ziploc bag of his or her own excrement, I can forgive.

Next week, Lena Dunham hosts and you must take a shot every time someone eats a bathtub cupcake or a bodily part is blurred by the network.