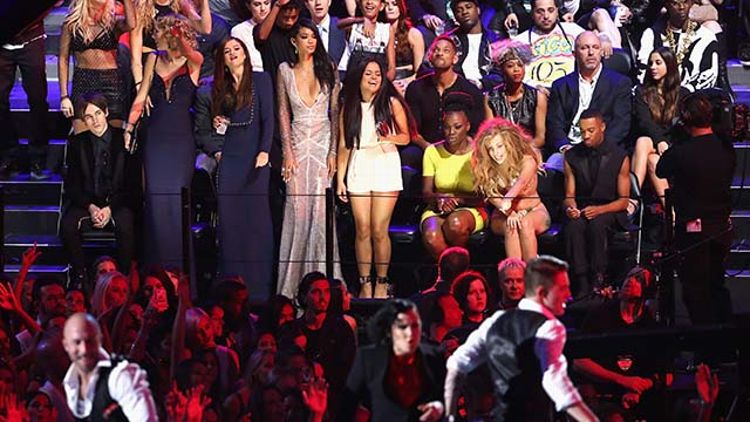 Let’s get this out of the way: There’s no particular reason to go see the VMAs live. This thing is not a live show that happens to be televised: It’s a performance-first, production-heavy event, rendered in MTV’s signature jump-cut OCD style for TV consumption. And so the plebes in attendance can sometimes feel like second-class citizens, caught trying to stare around the epic giant inflated Moon Man’s left leg, where Daft Punk and Pharrell and Nile Rodgers are apparently palling around up on camera. This doesn’t apply to the famous people, of course. The famous people get the proper vantage points they, by rights of their fame, totally deserve.

Speaking of the beautiful people: MTV had them all huddled in one well-lit section to the right of the stage, where waiters with drink trays were omnipresent. You got to see every last ounce of Taylor Swift’s carefully cultivated reaction shots, in crisp HD. I and the rest of the norms in section 112 craned our necks to figure out which of the Taylor Swift–like shapes was actually Taylor Swift. Until, like, 30 minutes in, I didn’t know that the crazy big-haired lady in the bikini was Lady Gaga. Honestly, if you wanna know what it is you “didn’t see on TV,” it’s a whole bunch of dudes in cargo shorts and head sets. Also: When Macklemore thanked “all the homies nominated,” it seemed uncouth to, as you certainly would in the comforts of your own living room, scream out “this fucking guy.”

But there were certainly benefits to being inside Barclays Center. During the commercial break, before Miley Cyrus came out and pretended like a Mickey Mouse foam finger was a dick, her dancer bears trotted out onstage first, to get in position with the stage lights still off. We didn’t know then they would be getting twerked upon and twerking back in kind. We just thought they were cute bears. Those were innocent times.

There was also the strange sight of the floor, disjointedly only half-full to make way for stagehands to roll Tetris/jigsaw-puzzle stage pieces in and out. It was all impressively seamless: a couple of times the crowds would have to be forcibly cattle-herded to get out of the way of a catwalk, but it seemed no one was trampled underfoot. The closest thing to moments of panic was a disembodied voice, speaking over the PA system with a clipped British accent: “Ladies and gentleman, please take your seats again — Ladies and gentleman, we are live around the world in 20 seconds. Thank you.”

Other perks: We got to hear Kanye actually say “fuck them other …” during “Blood on the Leaves,” and we got to see him do the “stand completely still after you finish your song and let the waves of adulation wash over you” move, which was only slightly undermined by the announcer blathering on about “Coming up next: Bruno Mars wears a dumb hat!” or whatever. We got to see Drake head backstage after his performance across the floor, trailed by about 30 goons in Nothing Was the Same T-shirts. And that was only the night’s second-best reversion to hip-hop’s old blunt-trauma school of promo. First, Jason Collins shared a touching anecdote about his grandmother’s fears about his coming out. Then A$AP Rocky shouted out his dude A$AP Ferg’s release date. It was … it was sublime.

And then, it came. The moment we were all waiting for. The moment that made being in the building worthwhile. Not Justin Timberlake’s montage; that was great and all, and certainly the most amped the crowd got all night. Not the ‘N Sync reunion; that was like a beautiful butterfly, fluttering away to death all too soon. No: It was the moment after the ’N Sync reunion, when the cameras followed Justin back to the main stage and his four ex-BFFs hovered back down into obscurity through their individual stage chutes. Well, all except Chris Kirkpatrick: In a moment proving forever that whatever evil aliens control the universe have a sense of humor, the most punch line–y ’N Syncer’s stage chute malfunctioned and didn’t open up for him to make his escape. He stood around a few beats, hanging on kind of a surfer dance move. Then he accepted his fate and ably leaped down into the chute hole next to his. It was everything.

And after the party, it’s the after-party.

I didn’t actually realize that VMAs after-parties would be a going concern. By the end of the night, though, you could tell all the gentlemen in tieless suits and the ladies in boob-friendly dresses were getting antsy to make moves. A powerful reminder: Even if you think you are somewhere good and special, there is always a place more gooder and more specialer. Then folks more clued in than me started tipping me off, via text: “2 Chainz is at 1 OAK! Gaga’s at GoldBar! Something’s happening at WIP!” And all those hot spots seemed pedestrian. Because Prince was in town. And word was, he was playing tonight.

The venue was City Winery, a small Soho club where Prince’s band, the New Power Generation, had been holding down a weeklong residency. He’d already popped up just a few nights earlier, dropping in at 1:40 a.m. Last night? We didn’t get so much as a whiff until 3:14 a.m.

First, we had Doug E. Fresh, winningly charming with his old-school PG shtick. (“Muslims don’t eat pork,” he dropped at one point of his tutorial rap-a-long. “I eat my cornflakes with a” — “fork!” we all happily volunteered, walking right into that self-beasting.) Sly and the Family Stone bassist Larry Graham, resplendent in all white and electric on his supernaturally fuzzed-out bass, dropped “Everyday People,” then explained how he always loved playing that one because he only had to play one note: “I just hung on this G right here!” Cee Lo showed up, in customary black silk-robe PJs, covered “U Got the Look,” then egged us into a “Prince! Prince!” chant. NPG vocalist Shelby J told us to “call somebody and let ’em know they missing the best party on earth! And we ain’t got no curfew.” And then we knew it was on.

And when it finally happened, it happened quickly. With the giant horn section blaring and the band cooking, the lights came down, and out came Prince — Prince! — all cool in his Afro and a pair of dark shades he wouldn’t remove the whole time. And that would be some time. From go, the dude was in lockstep with his band, dropping into synchronized stutter steps, little side-action shakes, all manner of dips and dives. He’d take his mic and hover it over various trumpets and saxophones, adorably bigging up his backing outfit. And at one point, he messed around and told us his dancer — a tall girl in a sparkly dress who moved like a perfect, futuristic, aggro body performance robot that had recently learned how to love — was “gonna do a solo rap right now,” and she almost died with embarrassment. Point being: He was loose, on fire, and having fun. He wouldn’t wanna go anywhere.

The set list was preposterously overstuffed: We got “1999” and “All the Critics Love U in New York” back to back; we got “Nothing Compares 2 U.” And every track would swell and breathe, and everything was in his control: Prince would demand the lights up, or all the way off; with histrionic conductor verve, he’d build up horn blasts into perfect little drop-out moments. “This turn-around gonna hit you so hard you gonna feel like it’s an act of God,” he promised before, yep, “Act of God.” And he delivered.

I’m not gonna pretend like I was in full possession of my faculties, and I wasn’t the only one. As the show blasted past the 4 a.m. mark, I looked around and saw the stifled yawns and sleep-deprived casualties propping up on stools for support. And yet, at 4:49 a.m., when Prince walked off the stage for the first time, they screeched and stomped their boots and begged for more. He complied, taking on a solo keyboard encore, walking off for another moment, and then coming right back, with the whole band this time. Before “Raspberry Beret,” he told us “I’m tired of singing. You sing!” Over the next hour, he teasingly wandered off a couple more times. But it wasn’t until a nearly inconceivable 5:41 a.m. that he — reluctantly! — punched out for good.

It was gorgeously loud and chaotic, and part of it had this endurance-test feel. It’s super late, yes, and we’ve been going for hours, but we are going to keep going until we collapse. And a word on that: Prince is 55 years old, and utterly unstoppable. What is it, exactly, that’s going on here? Is this the spoils of money and fame, where in-house dietitians and nutritionists can get you to your best self? Does he sleep for days before pulling off shit like this? I say no: I say some people just have it. (It’s either that or he has one of those life-rejuvenation tube-baths that Luke gets dropped in after Han pulls him out of the frozen tundra of Hoth and the stomach of a Tauntaun.) “You gotta wake up and go to work tomorrow,” he taunted at one point. “This is my job. This is where I work.”