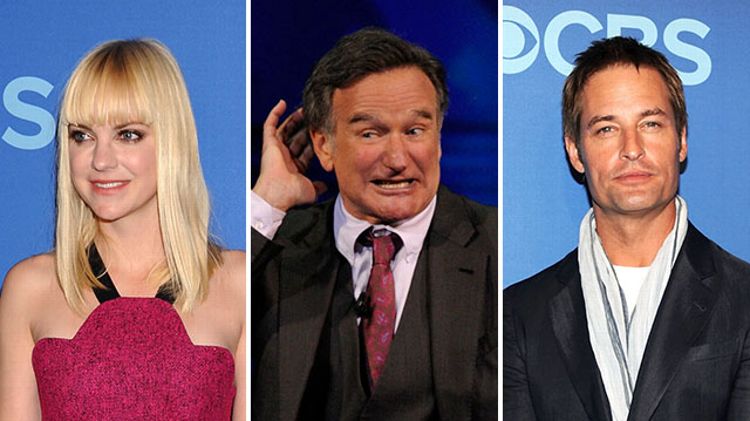 The sun is shining, the birds are chirping, and the agents are drinking. It’s upfronts season in New York! This is the week the broadcast networks throw fancy parties to announce the new shows they’ll be cancelling in a few months and celebrate the returning veterans whose survival was brokered through a bruising backroom combination of studio strong-arming, dumb luck, and blind optimism. Over the next few days I’ll be posting my thoughts on all the announcements with the giant caveat that I haven’t actually seen any of the new shows in question yet. Which isn’t such a big deal because, odds are, you won’t be seeing them for very long either.

For a long time, it seemed curious to me that some comic-book supervillains spent so much time trying to destroy the world. Lex Luthor, for example, is the richest man in Metropolis. What reason could he possibly have for picking a fight with a flying alien demigod? Why not sit back with a bottle of Krug, a couple tubs of scalp moisturizer, and enjoy the spoils of success?

As I grew older and not at all rich, it eventually occurred to me: Lex’s archrival wasn’t Superman. It was boredom.

I imagine it’s much the same way for CBS president and CEO Les Moonves. Since taking the reins of the former Tiffany Network in 1995, Moonves and his team have redefined the rules for television dominance, winning the ratings race for total viewers year after year with a carefully curated schedule of breathtaking consistency. CBS airs the shows that Twitter doesn’t talk about but America actually watches, joke-heavy sitcoms larded with howling studio audiences, and cop shows with tough-sounding acronyms in which the bad guys get theirs and the good guys wear sunglasses. Every spring, when his rivals are scrambling and cancelling, Moonves is smiling and renewing. Openings on the CBS schedule are as rare and coveted as vacancies on the Supreme Court. I’d make a joke about the candidates for the latter being roughly the same age as the target audience for the former, but Moonves has even triumphed over that stereotype. This past year, CBS won not just in total viewers, but also those in the much-coveted 18-to-49 demographic for the first time since 1991. At this point, CBS isn’t just crushing its competition, it’s excelled its way into a Champions League of one.

Previously on The Upfronts

Fox brings back 24, J.J. Abrams, and the proud tradition of the cop comedy

And so it’s hard not to get a whiff of Lex Luthor emanating from the new schedule Moonves unveiled yesterday in Manhattan. Instead of investing in seemingly sure things like Shawn Ryan and Eddie Murphy’s much-touted Beverly Hills Cop (which, apparently, is being “shopped elsewhere,” which could well be true but that phrase is sometimes the “pining for the fjords” of the television industry) and yet another iteration of NCIS, Moonves loosened his tie and let things get weird. OK, green-lighting two single-camera sitcoms (along with two familiar multicams) and a hyper-serialized “event” series from Jerry Bruckheimer isn’t all that crazy, but for staid CBS it’s akin to cashing out your 401(k) and going to live in Bali to “really get into” tea. It could be that this shakeup is connected to last year’s very un-CBS-like failures: Of the six on-brand series it announced this time last year, only one, Elementary, survived. CBS has long had the resources to absorb the rare misstep, but even Two and a Half Rapidly Aging Men will expire eventually. With these newly announced reaches — coupled with a promising-sounding expansion into summer miniseries with June’s Under the Dome (a Stephen King adaptation originally slated for sister network Showtime) — Moonves, for the first time, appears to be considering a future in which the old ways don’t work anymore, a time when a network that has thrived on stasis may have to adapt or die. Or it could just be that he’s bored. Justice League: You’ve been warned.

That America has forgiven Robin Williams. That no one notices Mark Harmon actually died three years ago. That Margo Martindale can sell fart jokes the way she once sold moonshine. That … wait, who am I kidding? CBS doesn’t deal in hope. CBS deals in money.

Smart and powerful people spent so many years investing in the idea that Anna Faris was a movie star that it took longer than perhaps it should have to realize that maybe she’s just not. As it has been for so many gifted actresses unable to find the right roles on the big screen, TV could well be the perfect landing spot for Faris. She’s an appealing performer with a wide-eyed mix of sweetness and sunlight — she’s always reminded me somewhat of a Peep — and a fearless inclination to dive straight into all manner of dark weirdness. So while those behind the camera on Mom, Faris’s new sitcom, make me nervous — it’s the latest production from the Chuck Lorre cash-printing factory — those in front of it give me at least a modicum of hope. Faris plays a newly sober single mom, surrounded by the wonderful Allison Janney as her own tipsy mother, the pleasant Nate Corddry as a love interest, the amiable Matt Jones (Breaking Bad) as an ex and the … divisive French Stewart as a sarcastic guy who announces things. I have no idea if Mom will be worth watching, but Faris almost always is.

Intelligence is an action hour about a macho special forces type who becomes a national asset when a top-secret government program implants a microchip containing the entire Internet in his brain. As someone who currently dreams in 140-character bursts and writes 39 Things That Would Be Cool to Eat at the top of his grocery lists, this basically sounds like a nightmare. But then I watched the trailer and saw it stars Sawyer from Lost as a sort of blond, bantering Jason Bourne and I reconsidered. The only potential Stuxnet here is that it’s on CBS. A show like this needs to celebrate its own ridiculousness, but CBS tends to treat even its most outre concepts — like Person of Interest’s vigilante Batman noir — with the same type of stern solemnity Bob Schieffer uncorks for presidential debates.

Hostages concerns an FBI agent (Dylan McDermott, resplendent in a neck chain and perfectly cultivated South Beach–at–5 p.m. stubble) who goes rogue and invades the home of a surgeon scheduled to operate on the president of the United States. He wants her to kill the commander-in-chief. If she doesn’t, he’ll kill her family. I honestly have no idea how this is a television show, let alone one limited to 15 hours — even the sizzle reel features glimpses of the sort of kid-centered, story-extended soapiness that has infuriated fans of Homeland (pregnancy tests, illicit kisses, potential Washington Wizards fandom). “The audience is never gonna know where this show is going!” McDermott enthuses at the end of the trailer. Is it just me or does that sound like a threat?

The Crazy Ones has a remarkable pedigree. It’s Robin Williams — returning to television for the first time since he gave birth to Jonathan Winters — in the role of a zany Chicago adman. His daughter is played by noted vampire slayer Sarah Michelle Gellar. And his protégé is portrayed with brownnosing aplomb by James Wolk, one of TV’s most charming actors and also its most unlucky. (Wolk’s first starring role, Fox’s Lone Star, was cancelled after two episodes. Though he’s currently on Mad Men as Bob Benson, everyone at Sterling Cooper loathes him.) The show was created by David E. Kelley, who was Aaron Sorkin before Aaron Sorkin was Aaron Sorkin. So why do I have such a terrible feeling about this? Is it because of Williams’s unencumbered mugging? Or how, in the “behind the scenes” trailer, everyone is laughing at their own improvisations with the self-adoring faux-modesty that makes me want to set fire to the Actor’s Studio? Is it the fact that Kelley, despite writing “funny” bits for great shows ranging from L.A. Law to Picket Fences has never actually run a sitcom? Or maybe it’s the sexy hamburger song belted by guest star Kelly Clarkson in the pilot? Let’s hope it’s the sexy hamburger song. For all our sake.

Two years ago, the broadcast networks went all-in on what Time’s James Poniewozik cleverly dubbed “manxiety.” It was a fratty deluge of sitcoms devoted to the idea that those suffering the most in our modern age were the adult white males who had been feminized by feminism and castrated by culture. Most of these shows, happily, Iron Johned their way to early extinction. But CBS seems to want to give it one more try with We Are Men, a single-cam sitcom that begins with the exact same premise as the recently euthanized Happy Endings — man is left at the altar — and quickly goes downhill from there. It’s the story of four would-be Lotharios — played with varying degrees of embarrassment by Tony Shalhoub, Jerry O’Connell, Kal Penn, and Chris Smith — hanging out in a bachelor-friendly apartment complex in Tarzana, bonding in the hot tub and picking up MILFs in bars. Actually, the broad strokes of this remind me of a great and vicious crime book by Charles Willeford called The Shark-Infested Custard. Wake me when these dudes stop ogling women’s bodies and start having to dispose of them.

The Millers is a sitcom starring the reliably wonderful Will Arnett as a divorced TV newsman whose sudden freedom inspires his parents — played by Beau Bridges and Margo Martindale (who signed up for this when The Americans neglected to give her a multiyear contract) — to split up, too. The writing is by Greg Garcia, who has done fine work in the past with single-cam shows My Name Is Earl and Raising Hope. Despite all this, the screechy trailer misses the mark entirely. Martindale passes gas and pops pills, J.B. Smoove makes a joke about old white women loving ice cream, while Bridges hams it up in the background like a maple-glazed holiday roast. A few years ago, Michael Schur, the man behind Parks and Recreation, dismissed my dislike of multi-cam sitcoms by saying “people watch TV for different reasons.” I can respect that just as I can imagine this becoming a giant, throwback hit. But I very much wish that some network would take a chance on a show that wasn’t just old-fashioned in style, but old-fashioned in tone as well. Cheers was a multi-cam comedy. So was Seinfeld. And to my knowledge, neither of them ever had a joke about the horrors of maternal flatulence. You know, suggesting that older folks might be deserving of some dignity is something I never thought I’d find myself writing in a piece about CBS. Maybe things are changing over there faster than we realize.

Filed Under: CBS, The Upfronts