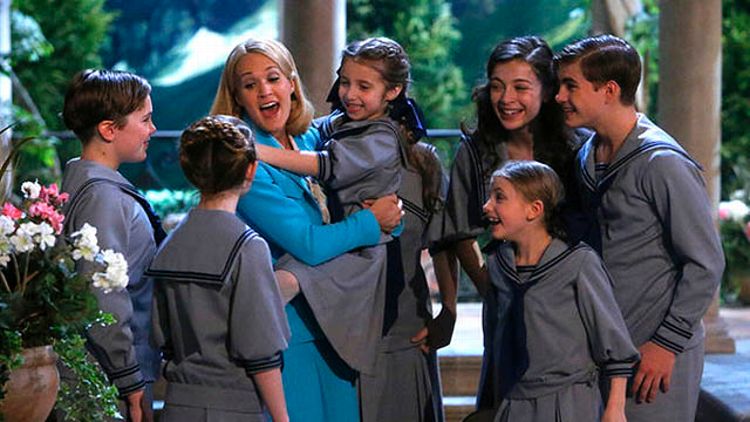 The Hollywood Hills were alive this morning with the sound of NBC executives exhaling and finally getting around to unwrapping their day planners for 2014. Whiskers on kittens are all well and good, but they’ve got nothing on job security. The network’s live staging of The Sound of Music saved everyone’s lonely goatherd last night, garnering a boffo 18 million viewers (including an eye-popping 4.6 rating in the coveted 18-to-49-year-old demographic) and, across the board, the sort of numbers NBC hasn’t seen on a Thursday night since the ER finale. Bob Greenblatt, long a punching bag around these parts for his poor programming choices, deserves the peacock’s share of the credit. Though wobbly in nearly all other matters of taste, Greenblatt has never been shy about his bedrock belief that the one thing capable of saving network television is musical theater. Sure, his beloved Smash got smushed. But last night proved people actually really like seeing pretty, talented stars sing and dance. (The lesson? Give America its razzle-dazzle sausage. Don’t force them to watch that sausage learn its lines and try to adopt a child from China.)

If you happen to be driving through those ritzy Hollywood Hills later tonight, you’re liable to hear some additional sounds; a few of them might even be musical. That’ll be those same ravenous executives taking to Spotify like a Von Trapp to a plate of schnitzel and noodles. The goal? Finding the next classic musical that can be buffed, polished, and, preferably, retrofitted to accommodate the outsize pipes and underformed chops of an American Idol winner. Immediate repetition isn’t the most inspiring path to success, but NBC’s been looking for one for a decade; who can blame them for retracing their steps? I liked Molly Lambert’s suggestion of Guys and Dolls: Jimmy Fallon’s BFF Justin Timberlake would make a great Sky Masterson, and Fallon himself would do just fine as Nathan Detroit. You just know Hugh Jackman would love to saddle up again for Oklahoma. And I’d be super into seeing NBC’s comedy all-stars take a pass at Sondheim’s great, underappreciated A Little Night Music. (Nick Offerman as Count Carl-Magnus! Danny Pudi as Henrik!)

But whether you’ve got a thing for Broadway or not, all television fans should be enthused by the response to The Sound of Music. For too long the traditional broadcast networks have been flailing, attempting to reverse years of sinking ratings by doing the exact same things that got them into this mess in the first place. Instead of trying to recapture lost eyeballs with a familiar diet of bland comedies and tepid, cable-style dramas that lack both guts and spark, the Big Four ought to focus on doing what they do best: going big. Yes, pop culture is sliced into thinner and thinner demographics and the multitude of screens and channels means viewers can watch what they want at any moment. But broadcasters still have the reach and the cash to make outsize plays for our attention, something that is both reassuring in splintered times and necessary to bankroll worthy, ratings-challenged series like Parks and Recreation and Parenthood. The continued success of award shows and sporting events proves audiences are always willing to watch famous people and opportunities for grievous injury — what better way to combine the two than with live productions of musicals? So, yes, the hills were alive last night. But more important, so was NBC.

Cancel the Rest of Your Friday Plans: Christmas Cats TV Is On