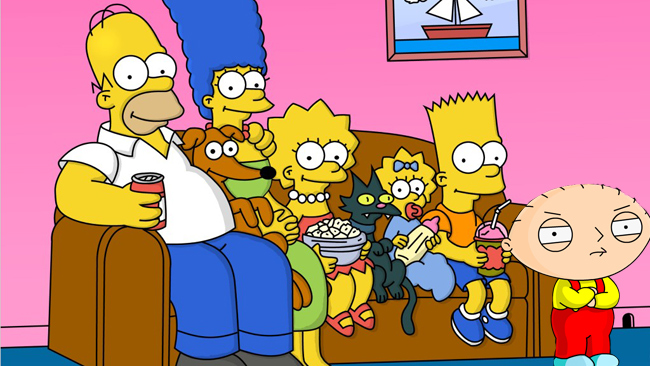 Earlier this week, at its upfronts presentation, Fox updated us on some news first announced last year: The Simpsons Guy — a one-off Family Guy/Simpsons crossover special — will air this September. There was even some footage previewed: It featured, according to IGN, “Stewie, looking a little unsure of himself, attempting to skate with Bart and, in a moment many will find of note, Homer and Peter getting into an all-out brawl. The two end up rolling around in the street, and the last thing we saw was Homer grabbing Peter around his neck and throttling him as only Homer can.” Are you feeling a little sad now? That’s OK. I am, also, feeling a little sad now.

It’s not exactly like Family Guy is going to be tainting the sacred purity of The Simpsons or anything; certainly, latter-day Simpsons has done enough to taint the sacred purity of The Simpsons already. But The Simpsons did, for a while, cultivate a nice strand of tossed-off dismissiveness toward the Seth MacFarlane empire, and that was a boon to anyone who believed in Good vs. Evil as rendered within Fox’s Sunday-night Animation Domination block. And now that’s all gone.

The grist of the thing, more or less: Family Guy knocks off The Simpsons, and quite crudely so. Matt Groening has downplayed it, saying, “The rivalry is very affectionate. Seth MacFarlane … is a good guy and he does great work, and I certainly have no problem with the perceived competition. If anything, we have the same kind of competition that Pugsley Addams and Eddie Munster had in the old days.”

But despite announced goodwill, The Simpsons has doled out a few choice shots over the years. Let’s let the good people at the Sydney Morning Herald sum up:

In one episode of The Simpsons, a series of increasingly dimwitted Homer clones ends with Family Guy patriarch Peter Griffin. In another, an Italian book of mug shots features Griffin with the label “plagiarismo” and Stan Smith, the father from another MacFarlane series, American Dad, labelled “plagiarismo di plagiarismo.” The Simpsons’ producer Al Jean put it in a more gentleman-like fashion: “They should be more original.”

Family Guy, being Family Guy, eventually responded, in just charming fashion: “in 2007, a Family Guy episode included a sequence in which Glenn Quagmire, the Griffins’ sex-addicted neighbour, tries to have sex with Marge Simpson, is later caught in bed with her and finally turns a gun on the entire Simpson family.” What. WHAT. “The sequence was cut by Fox, which feared it would exacerbate the feud, although it did air in Canada.” Canada was cool with this? CANADA??

Simply enough: Even if we didn’t actually watch The Simpsons anymore, at least we were comforted in knowing that we stood with it against its mighty Fox brethren. Now, though? Now that’s all dead.

If you’re looking for a new ally in your theoretical battle, though, don’t despair: the South Park guys are probably not gonna mellow out any time soon.