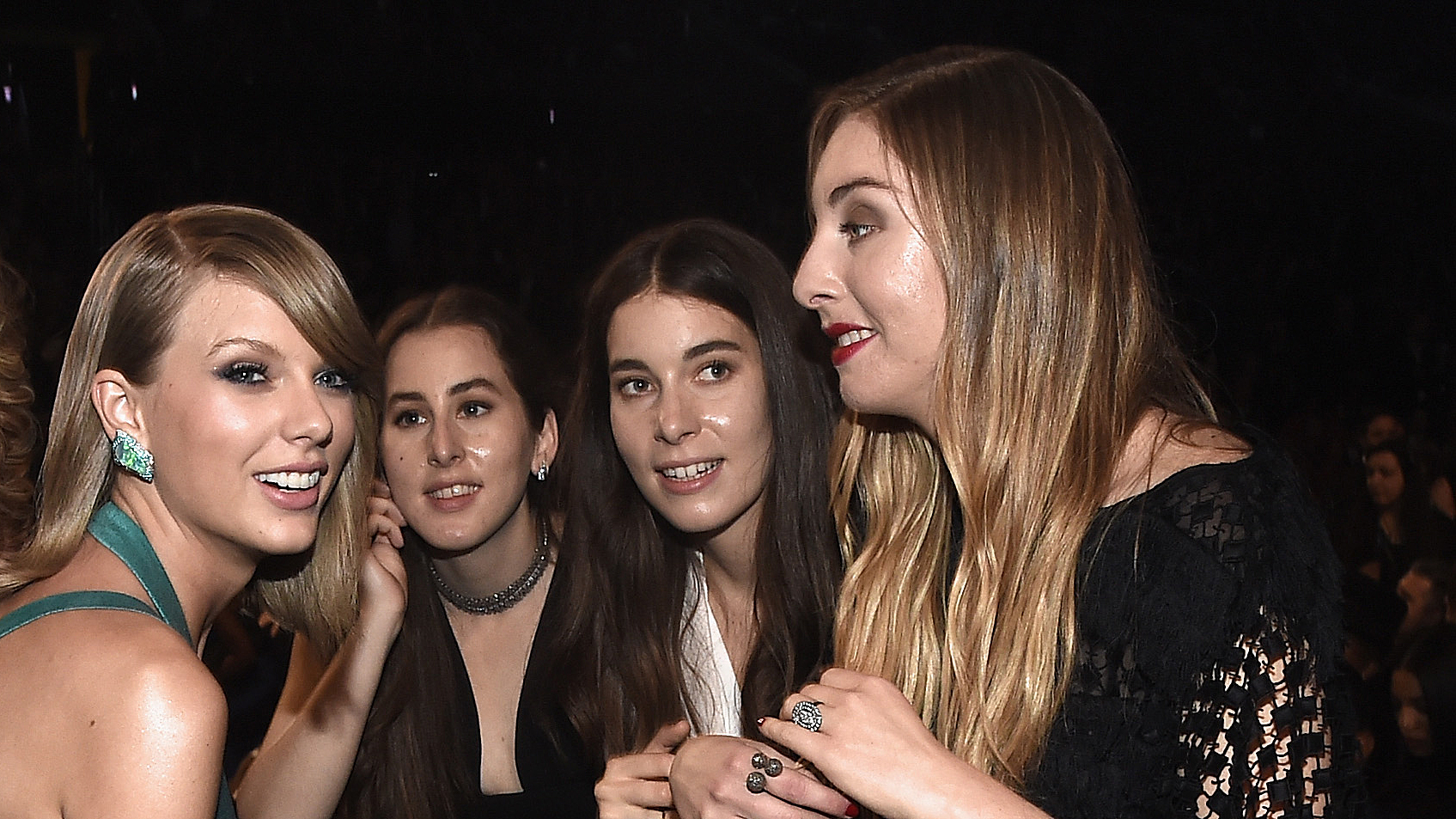 All of a sudden, Haim is inescapable. You’ve heard them on the radio, singing on that Calvin Harris jam, you’ve seen them in Hawaii on vacation with Taylor Swift, and you’ve read about them on online gossip blogs because of a supposed love triangle involving the youngest sister. The three sisters — Este, Danielle, and Alana — released Days Are Gone in September of 2013, 17 months ago. They remain in heavy rotation, thanks to Harris’s “Pray to God.” Somehow Haim are more visible now than when they were promoting their debut album.

They first leaped from music blogs to the fringes of mainstream pop culture when “Forever” was used in a Target commercial. The ad seemed like a charming integration, but it hardly presaged this new ubiquity. How did they manage such a death grip on pop culture without the help of a new album?

In retrospect, we should have seen it coming. This video premiered in late summer. Instead of serving as the Days Are Gone swan song, it unofficially jump-started Haim’s second wave. They tapped A$AP Ferg to jump on the remix, and the video features Kesha, Vampire Weekend’s Ezra Koenig, producer Ariel Rechtshaid, and Saturday Night Live’s Vanessa Bayer. Here they are, flexing their celebrity muscle. Look, we can get hipster icons and actually famous people to be in our video! The careful mix of associating with widely recognizable and niche stars has since calcified into the band’s brand. I just didn’t realize “My Song 5” layed it out so neatly. Also, this is a great song.

Pop goddess Taylor Swift turned 25 on December 13. She threw herself a party at her New York apartment, and invited all of the cool kids: Karlie Kloss, Jay and Bey, Sam Smith, and, of course, Haim! The photo is a defining victory for the band. Unless there’s an elevator incident, any association with Jay Z and Beyoncé is positive for ascendant music celebrities. Not all Haim sisters are equal, though. We see middle sister and lead singer Danielle in the physical clutch of Kloss, anchoring the left side of the photo. It’s a prime position, tangled up with the only person in this picture who is confirmed to be a legitimate friend of Taylor’s. Yet Alana, a.k.a. Baby Haim, flanks the pack on the right side, wearing a crown and making a funny face. She’s the best lit of the bunch, the beneficiary of a subpar Instagram filter. Unfortunately for Este — the oldest — she is sequestered at the bottom. Though she is known for the dramatic faces she makes while performing, here she just looks drunk. Nonetheless, we have Haim invading the upper stratosphere of celebrity, and they’re coming in from all sides.

Anyone can weasel into a house party. A Taylor Swift Knitting Circle group outing is far more difficult to infiltrate, but somehow Haim successfully did so. The sisters accompanied Taylor — as well as Jaime King, Lorde, and figure skater Gracie Gold — on a day trip to Catalina in early January. It was a big look for them, even if they were relegated to the back of Taylor’s photo. Some kind of coastal retreat with Taylor Swift is becoming a rite of passage for famous women in their twenties. But it turns out this short trip was just a precursor to an event that would put them front and center: a weeklong trip to Hawaii! And now we begin to see Haim feeling themselves. They’re on vacation in late January, which is a time when only famous people take time off, because everyone else has just returned from Christmas break. The trip also included activities like whale watching, boating, and hiking.

If “My Song 5” was the first hint of Haim’s new brand, this photo was its culmination. Not only are they hanging out with the top pop star in the world, but they’re also forcing her to adopt their deliberate style.

Bill Murray is the perfect icon for their indie-gone-mainstream ethos. Despite his multi-decade career that includes several comedy classics, a new generation has come to love him because he does kooky things — crashes weddings, poses for photos with strangers. It’s almost as if he’s more famous with the Haim demographic for being a lively older man, not because he starred in What About Bob? and Ghostbusters. In other words, he remains beloved for doing nothing more than seeming fun and pleasant. He must be an inspiration to Haim, which is why we see them wearing these otherwise confusing and contextless shirts. The shirts are obtuse enough to distract from the fact that Taylor Swift is wearing high heels while standing on a rock until your fourth or fifth glance.

Shout-out to the Jimmy Kimmel writers. This is excellent wordplay, and it’s an infectious performance. Haim spent the first two minutes looking locked-in, concentrating very hard on their choreography and minimal singing requirements. Given the number of words they sing, it becomes clear they are there more for the joke than for anything else. But Este Haim will not let an opportunity to maximize the moment go by. Around the two-minute mark, she steps out to show off her moves. And now Haim have peaked.

This was Este’s heat check. This was Klay Thompson in the fourth quarter of his record-setting game. Este pushed herself to take one more ridiculous shot, and she missed. Associating with Taylor Swift brings a level of attention that three sisters from the Valley couldn’t have previously comprehended. It probably emboldens you to think that anything is possible and the world is yours. But, Este, you are not Taylor Swift. Your power is tied to your sisters. Get back in line. She’s a competent dancer, but without her sisters by her side, she looks like someone trying on a new persona that doesn’t fit.

With their long, straight hair and predilection for flowing garments, it was only a matter of time before they collectively morphed into a band of Stevie Nicks impersonators. The Calvin Harris video allows them to reach this potential, and I’m assuming they went this route only because the world already has enough “Landslide” covers.

Even if Harris’s style seems dissonant with Days Are Gone, this video is another iteration on their brand. Appearing on a Harris single ensures Top 40 radio airplay while maintaining their Internet credibility with the video’s style. Like Bill Murray, Fleetwood Mac remains popular with twentysomethings, who continue to discover the drama that suffuses Rumours and think it’s some kind of unique opinion to love Stevie. Alana was only a baby when Bill Clinton used “Don’t Stop Thinking About Tomorrow” for his presidential campaign. She can’t be expected to know that.

February 20: Scarlett Johansson, Este Haim, and Some Other People Announce They’re in a Band

ScarJo, Este, Holly Miranda, Kendra Morris, and Julia Haltigan have formed a band called the Singles. Here’s what Scarlett Johansson has to say about this side project: “I love Grimes. And I love the Bangles. And I love the Go-Gos. I wanted it to be like those bands: ultra pop but also a little ironic, a little in on the joke.” Oh dear. What is the joke here? Scarlett Johansson was already rich, but she will live a life of incredible largesse thanks to the Avengers franchise, so she has time for endeavors like this. Maybe the joke is that the world has to endure her foray into music in between Marvel movies. Or perhaps the joke is on Este Haim, thinking she’s ready to embark on musical activities outside of the band that has made her semi-famous.

The Jimmy Kimmel clip was, apparently, just the first indication that she had aspirations beyond being a bassist in a family band. It was also the first sign that we should be concerned about Haim. To this point, the three sisters are defined by their relationships with each other, their tidy family narrative, and, now, their friendship with Taylor Swift. The new level of fame is something to massage and maintain, not to use as a stepping-stone — at least not yet. We’re only six months into the Haim Second Wave. Even if solo side projects are a natural evolution, it’s too soon. Luckily, the sisters are opening for Swift on her 1989 tour this year. They can’t shatter that which they have so quickly built quite yet.