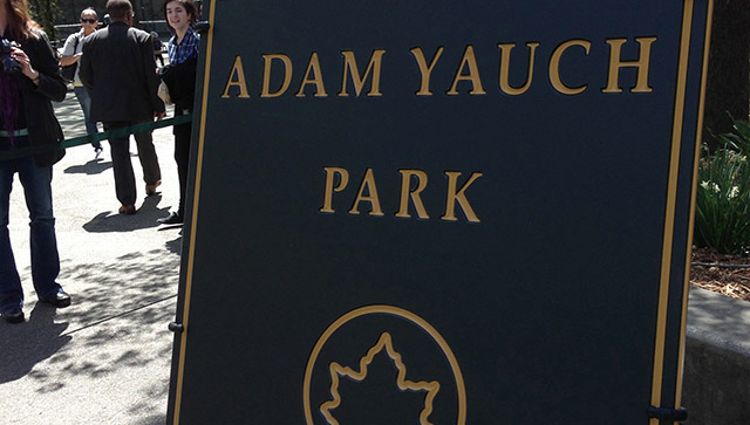 Tomorrow, it’ll be a year to the day that Adam Yauch passed away. This morning, at a park in Brooklyn just blocks from where Yauch grew up, his family and friends honored him in a very special way. The former Palmetto Playground — a tiny little slice of green tucked away from the honking trucks and screeching traffic of the BQE — will now, and forevermore, be known as Adam Yauch Park.

The ceremony took place at 11 a.m. this morning, with Adam “Ad-Rock” Horovitz and Yauch’s parents in attendance. A program was handed out, which explained that Yauch “grew up in Brooklyn Heights, on State Street, and learned to ride a bicycle in this park that will now bear his name.”

First, local government officials spoke. Adrian Benepe, the former NYC Parks Commissioner, got real, talking about how first kids come to parks to play — and then, when they’re a little older, they come to “do things they wouldn’t at home.” Stephen Levin, a fresh-faced City Council member, gushed about growing up with the Beasties’ music, and about how happy he was to have contributed to the renaming effort. Brooklyn borough president Marty Markowitz babbled about the Brooklyn Nets, happily ignorant that the Knicks are the Beasties’ team. Then Markowitz, a gray-haired sixty-something, rapped. In his artful hands, “An Open Letter to NYC,” the band’s heartfelt ode to a post-9/11 New York, became some doggerel about beating the Bulls. It was pretty awesome, and everyone liked it.

Adam’s mother, Frances, spoke last. She remembered how, after he passed away, there was an international outpouring of love and support. And the response from various friends of her and her husband? “We didn’t know your son was so famous.” Afterward, Frances, Adam, and the others posed in front of the new Adam Yauch Park sign. 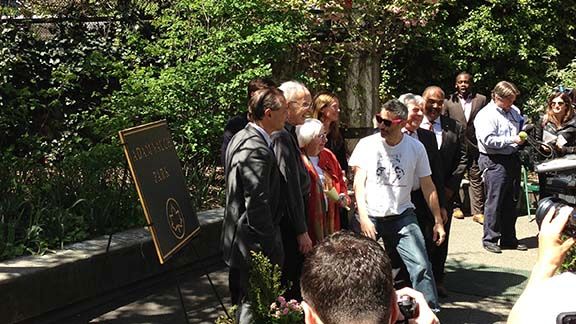 Ad-Rock spoke as well. He said he was nervous, and then thanked his sister, Rachel, who was sitting off to the side, for all her efforts in renaming the park. She immediately started welling up, and he told her to stop because now she was gonna make him cry. Then he said it was appropriate we were in a park because “like the Wu-Tang Clan, Beastie Boys is for the children.”

He went on to speak, very nicely, about Adam Yauch:

What does it mean to be a New York kid? People come to New York to be themselves, to express themselves, and to be who they wanna be. And although Adam’s mom, Frances, is a New York kid herself, his father, Noel, came to New York to be himself. And together they raised a New York kid, Adam Yauch. And Noel and Frances raised him right. They taught Adam to be curious, thoughtful, kind, and just enough crazy. That craziness that is New York. That New York kinetic energy. It’s musical, artful, and always moving forward. And that’s not only Brooklyn, that’s Adam Yauch. And then Adam and his wife Dechen raised Losel, a New York kid that’s equally talented, curious, and utterly awesome.

In life you don’t get to choose your family. You get what you’re given. I got lucky, ’cause I got given two great sisters and two great brothers. But I got extra lucky because around 1982 I got … two other brothers. Mike Diamond and Adam Yauch. And together our families have grown. I’d like to thank the New York Parks Department and the people of Brooklyn for honoring my friend and brother, and recognizing how cool it is to have an Adam Yauch Park for other crazy New York kids. Thank you. 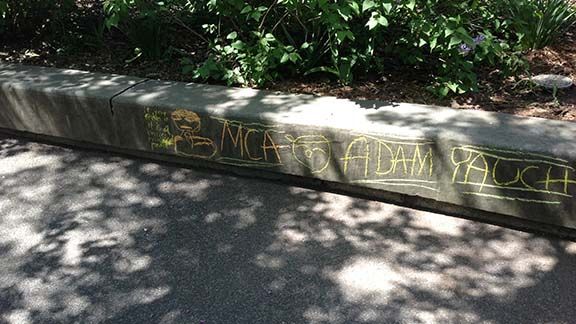 Filed Under: Beastie Boys, We Went there

Reality TV Podcast: Real World, Survivor, and Khecking in With the Kardashians