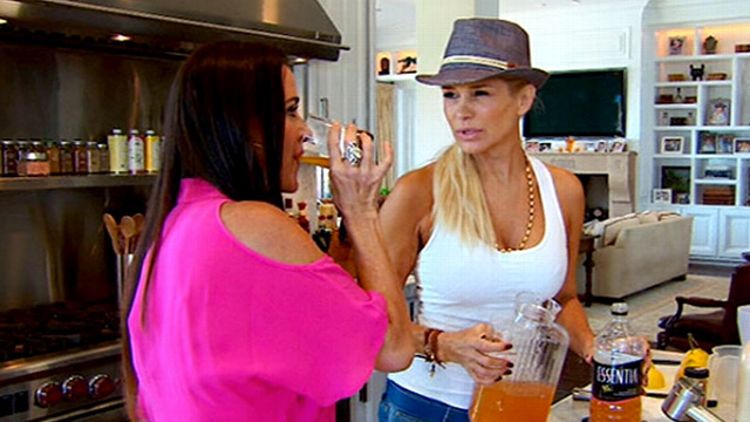 This is Yolanda. I haven’t been able to think of a succinct way to sum up Yolanda’s damage until last night, so thank you, Kyle Richards, for the phrase “Dutch Martha Stewart.” That’s pretty dead-on, as long as we’re talking ’90s Martha Stewart — before the trading scandal and house arrest and sense of humor. Yolanda is a turbo–Stepford Wife who injects lamb fetus into her face to ensure her immortality and does burpees to pass the time between harvesting the chard and organic honey. She seems like she should be smart enough to not say things like “I’m afraid volleyball is going to turn my daughter into a lesbian,” but then, that’s what makes her so terrifying. Yolanda doesn’t get very involved in the other housewives’ lives; most of her segments on the show are about how every surface in her Malibu home is covered with David Foster’s Grammys. One gets the sense that the couple only signed up for this show after they realized that that season-long MTV Cribs residency wasn’t going to happen.

Kyle has come by to visit Yolanda because Kyle needs someone cold and outlandishly wealthy around to make her look like just a normal, down-to-earth gal. She discovers Yolanda on the staircase that winds through the lavender garden, wearing skinny jeans, wielding gardening shears, and carrying a woven wicker basket of freshly picked lemons. “Think you got enough lemons?” jokes down-to-earth Kyle, as she realizes how (psychotically? Psychotically) far the orchard extends. Yolanda explains that when she did the Master Cleanse a few years ago she was so invigorated in her new poop-free state that she decided she wanted to grow her own organic lemons. Oh, OK.

Have you ever done the Master Cleanse before? I don’t know how much detail I can go into here without getting a stern reprimand from the Walt Disney Company, but let’s just say that Yolanda’s enthusiasm for it only adds a new, burning-hot discharge of insanity into her already frightening mix. Yolanda visibly lights up the more she talks about the cleanse and its innumerable merits. She’s like an under-socialized home-schooled child who, when presented with a topic, will proceed to tell you everything she knows about it, usually culminating in a proposal to engage in a Zoom-esque activity, like making a tornado in a bottle. The two retreat to Yolanda’s kitchen, where a fresh crop of lemons have been laid out alongside some grade B maple syrup and cayenne powder. Here it comes, here it comes … “You want to make some?” she asks Kyle. There it is.

So here’s what happened: About halfway through the season, one of the producers came to Yolanda and was like:

Producer: We’ve noticed you’re not mixing it up with the ladies that much. How about you find some glamorous activity that you’d like to share with one of them? Like an industry party or a yacht trip or —

Yolanda: Or we could do the Master Cleanse together!

Producer: Or … [Sighs, double-checks Yolanda’s contract.] Sure. Yes, Yolanda, you could do the Master Cleanse together. [Texts Marisa Zanuck: “Hey bb you down to get ur dRaNk on + give your 2 cents to a room full of strangers again? Is emergency : ( “]

Anyway, Kyle and Yolanda make their gross drink and then start talking about Kim. “You know, I invited her three times to come and do this, because I really wanted her to get healthy and feel good …” You mean Kim wasn’t jumping at the opportunity to come to a scary mansion and chug anorexia juice? WEIRD. This provides an opening for Kyle to talk more about how her sister’s substance abuse troubles were probably harder on her than they were anyone else, Kim included. (OK, she doesn’t use those exact words, but that’s the subtext every time this subject comes up, and Kyle is never able to process Kim’s alcoholism as anything more than a personal, direct affront against herself. But that’s OK, it’s hard to find time to practice empathy when you’re so busy being a relatable, down-to-earth gal.)

Kyle finishes her soliloquy, and Yolanda quickly comes to the rescue. “If we can only get her through 10 days of this” — zoom out to reveal plastic bottle full of gut-cleaner — “it will change her choices in her life, I promise you. I feel so strongly about it.”

I haven’t seen someone on non-Bachelor reality television so singularly preoccupied with something as Yolanda is with her lemonade evangelist crusade, so if a tear-jerky speech isn’t enough to distract her from it, a mere few hours is nothing. That night, the ladies convene at Dar Maghreb, a fancy Moroccan restaurant where men in knee-highs apparently bring laundry hampers full of bread directly to your table, and which I am sorry to report is now closed. Once Kim arrives, the topic of that day’s activities comes up and Yolanda leans forward toward Kim, her eyes narrowed to passive-aggressive mascara-blackened slits. “We were waiting for you,” she whispers ominously.

“Well, you guys were supposed to meet to do the Master Cleanse thing,” Kyle says, putting on her put-upon face with barely concealed pleasure.

“Don’t tell me — of course you were supposed to come,” chirps Yolanda in a truly horrifying falsetto, her eyes now completely dark. (Here are some fun, un-Photoshopped screen grabs!) “We were supposed to do the Master Cleanse together.”

“You can’t do the Master Cleanse anymore? Why?” Yolanda asks. The energy in the room shifts.

“Why?” Kyle echoes, aghast, as if Kim had just announced that her dealer was waiting outside. “I mean, you say that, but let us know why.”

“You know, it’s not good for me right now,” Kim says as Yolanda gapes with uncomprehending horror. “My body is not …” she gestures aimlessly, searching for words as Kyle’s eyes grow wider with every passing second. “I’m supposed to eat. And not to eat would not be good for me right now.”

“For my metabolism and my body. It’s just not a good idea.”

Kim is using her bullshit voice, hemming and hawing and rushing through her explanations, but the stuff she’s saying is not bullshit. Yet here she is, surrounded by judgy Botoxed faces as she tries to explain that she would like to eat food, and the first assumption is not that she is a normal person with an appetite, but that she’s drinking again. Nevertheless, she glaces at Yolanda, whose icy glare has not diminished, and punctuates her statement with a nod.

“[Yolanda] might not want to expect too much from my sister,” Kyle says in her talking-head interview, with a wry smirk. Her mentally imbalanced sister has tragically refused to participate in a widely criticized crash diet that would cause her to spend a week on the toilet, and yet Kyle still finds a way to smile through the disappointment. Good thing she’s such a normal, down-to-earth gal. Heaven only knows how else she’d make it this long in such a crazy town. 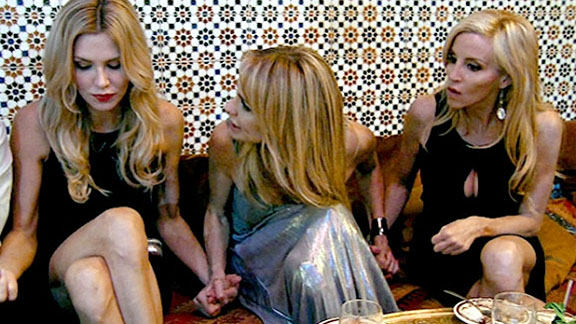 [Taylor grabs Brandi’s hand violently. Brandi momentarily looks at her before resuming the other conversation she’s having.]

Taylor: We’re NOT going to walk away. We don’t have the emotional support —

Camille: We don’t have the emotional support that everyone else has, so we’ve got to be strong.

Taylor: We’re gonna do this!

Camille: We owe it to ourselves!