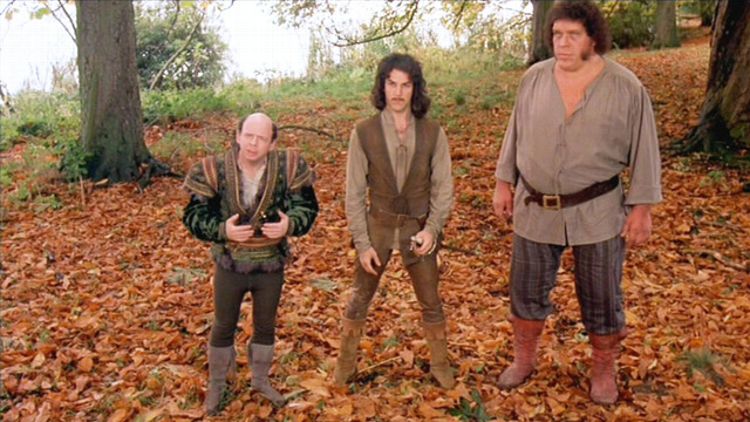 The theater is dead; long live the theater. Just as the musical production of Big Fish announced that it would be closing on December 9, Disney Theatrical Productions revealed that it will be partnering with William Goldman, the author and screenwriter of The Princess Bride (another fantastical story framed by two genetically linked dudes having a chat), to bring the well-loved and oft-quoted story to the stage. (Grantland is owned by Disney.) While the cult movie is never too far from anyone’s minds (triggers: battles of wits, anything to do with fencing, the topic of extra fingers, Mandy Patinkin, the NFL), it’s worth appreciating that Disney’s announcement coincides so well with the Dread Pirate Roberts’s trial in New York on charges he sold illegal drugs online (piracy’s come a long way since 1987). No relation to Cary Elwes. He’s just a fan like everybody else.

It’s not the first attempt at conceiving a live-action version of The Princess Bride. In 2007, Goldman — whose screenplays include Academy Award winners Butch Cassidy and the Sundance Kid and All the President’s Men — collaborated with Tony Award–winning composer Adam Guettel (The Light in the Piazza) on a musical adaptation that fell apart, reportedly because Goldman demanded 75 percent of the author’s share. It created a fair amount of hype, and its dissolution was unfortunate. On the one hand, as the author of the 1973 novel and 1987 screenplay, Goldman had a right to be proprietary; on the other, Guettel had 10 songs in the can, writing both the music and the lyrics. But forget all of that: You rush a miracle, man, you get rotten miracles. There’s no use pouring lemon juice on a paper cut.

Something about The Princess Bride, like all good cult favorites, makes it best enjoyed in the company of like-minded people. It’s just too much fun to waste a reference on someone who doesn’t get it, though their numbers are mercifully few. In 2012, the Alamo Drafthouse hosted a Valentine’s Day “Quote-Along and Feast” that went so far as to include mutton and eel (pairing suggestion: “As You Wish White,” from the “Bottle of Wits” series) on its menu to satiate die-hard fans. And while all of that sounds a little like Rocky Horror without the “Brad Majors”/”ASSHOLE” chorus and fishnets, The Princess Bride live experience, if done well, could produce enough good vibes to bring down the house. It’s sweet but not just for children, witty yet earnest: basically, Broadway bait.

If the show goes in a musical direction, the new composer will be hard-pressed to compete with Mark Knopfler, who scored the film (and won an Oscar for “Storybook Love”); it’s also difficult to imagine coming close to replicating the movie’s impeccable casting, from itty-bitty Fred Savage and his grandfather, the dearly departed Peter Falk, to Cary Elwes’s Westley and Robin Wright’s Buttercup (not to mention Mandy Patinkin, who was weirdly sexy as Inigo Montoya). It’s been nearly 27 years since the film’s release, and we’ve lost a number of the actors who appeared in it: Andre the Giant (Fezzik) died in 1993, the same year as Willoughby Gray (Prince Humperdinck’s dad), Peter Cook (the r– and l-less clergyman at the wedding) passed in 1995, and Mel Smith (the albino assistant torturer) died this past July. There is no choice but to start from scratch, hanging our hopes on Goldman’s vision and the momentum Disney’s theatrical arm gained with the billion-dollar The Lion King (and, perhaps, its upcoming Aladdin production). The Princess Bride failed to impress at the box office when it opened, but we’ve spent the better part of three decades realizing what’s so special about it. It’s possible that its story, and our familiarity with it, will be enough to motivate us to buy tickets for its reincarnation. At the very least, we can expect some young actor toiling Off Broadway to get his or her big break as a Rodent of Unusual Size, rolling around in a furry costume, hopefully with a solo number. As I wish.