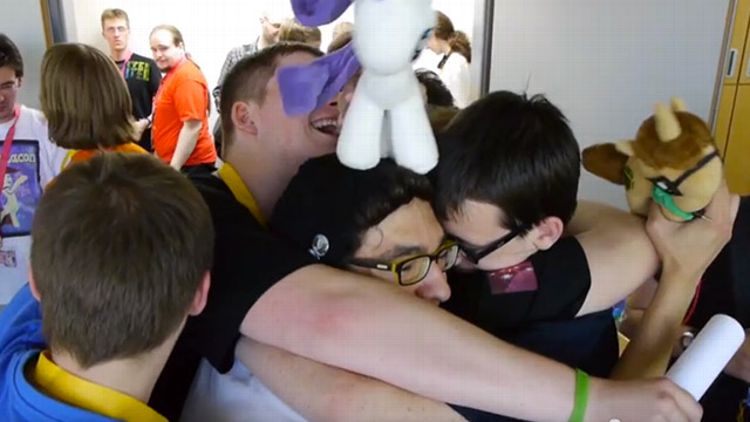 There was a time not all that long ago when subcultures were birthed offline. To find other people who shared your interest you had to travel long distances, hunt down zines, and shout at people on the street wearing T-shirts related to the thing you like in the hopes they would recognize you as a peer rather than run in terror. Internet forums evolved out of bulletin boards and allowed virtual communities to develop, in which usernames supplanted real identities and group members never needed to convene in meatspace to feel a genuine connection. By the ’90s, there were fan sites and newsgroups for every subject imaginable. I cut my baby teeth on message boards related to The X-Files, where I learned that as a fan I should consider myself an “X-Phile,” and a Mulder and Scully 'shipper at that. These are not words I ever would have said out loud to friends, but online I was surrounded by fellow X-Philes who didn’t think it was weird to spend hours consuming fanfic, reading interviews with Chris Carter, or searching for scans of the new Rolling Stone cover story. It was easy to acclimate to the new reality. Offline I was a person with a specific age, of a physical type. Online I could be free from those markers of identity; I could exist as an avatar, a nonrepresentational idea, a collection of thoughts. I was a brain in a jar, conversing with all the other brains in jars about X-Files mythology and my favorite Monsters of the Week. I never met any of these fellow fans IRL, but I had a catalogue of usernames stored in my head and even though I knew nothing about what these strangers were like in their daily lives, I was free to surmise based on their mode of X-Files fandom. If they weren’t exactly friends, they felt like acquaintances at the very least. We shared a common interest.

Defining yourself by the media you consume has always been commonplace, but it took social media to really demonstrate how inadequate it feels to reduce your personality into a series of lists. The ownership we feel over our favorite things is false, and Friendster, MySpace, and Facebook really served to drive this home. You like The Big Lebowski? Cool, so does everyone. The things you thought made you unique when you were the only person you knew interested in some genre of music, independent film, or corner of history turn out to be laughably banal. Even personality traits are memes, picked up and transmitted or willed into place. You thought you were not a type, that you escaped self-definition? You are still some type of way. It may be depressing to think you’ve forged your personality in a vacuum only to realize there is no such thing, but when you are young the idea of adopting a preexisting persona can be incredibly comforting. Why do you think so many kids come back to school as punks every fall? A preformed identity dictates that you have certain attributes you may not have yet, but just want to have. And say you feel alienated in your own culture — the Internet can feel like a utopian alternative, a place to create the society you wish existed. A world of jarred brains.

Bronies are adult male fans of the Lauren Faust reboot of My Little Pony entitled My Little Pony: Friendship Is Magic. The show premiered on the HUB channel, whose generic name hides the fact that it’s jointly owned by Discovery Communications and the Hasbro toy company. Sprinkled among reruns of Fraggle Rock and preschool shows like The WotWots are shows designed to promote Hasbro toys like G.I. Joe, Transformers, and, of course, My Little Pony. Faust is an animator who came up through the Cal Arts pipeline to Cartoon Network, where she worked on The Powerpuff Girls and Foster’s Home for Imaginary Friends with creator Craig McCracken, who also became her husband. Faust’s retooled My Little Pony focused on the original show’s message of friendship and togetherness, but with more action and quick humor than the first generation ever allowed for.

When Friendship Is Magic launched in 2010, it became an immediate hit not only with its intended demo of young girls, but an unexpected group of dudes, whose age was also way out of the projected range. Men of all ages came to defend the show after the website 4Chan republished an essay on Cartoon Brew written by animation critic Amid Amidi, who tore into the show for its blatant pandering and product tie-ins — Amidi considered this a throwback to the ’80s when more or less every new cartoon came with an accompanying range of toys. 4Chan commenters sprang to the show’s defense, pointing out that it was actually very well-constructed, looked great for a Flash animation, and genuinely aspired to teach good values through its “Elements of Harmony”: generosity, loyalty, honesty, kindness, laughter, and magic. It’s interesting that the Bronies movement sprang from 4Chan, which is known for picking up cultural rocks great and small to GIF the bugs wiggling underneath. Friendship Is Magic memes and in-jokes took off on 4Chan, and anti-Pony trolling got so vicious that any discussion of My Little Pony whatsoever was temporarily banned on the site. Meanwhile, Brony fandom took off more than ever, with websites, art communities, and even terrible microgenres of music devoted to celebrating My Little Pony: Friendship Is Magic.

What is the fascination these young men have with the show? Well, it does have Faust’s nice candy-colored style going for it, and it’s also super comforting. Problems get solved. People help each other. Everypony wins. On the one hand, the first poster to defend My Little Pony on 4Chan may have been earnest, but they also might have been trolling and just playing pony’s advocate. The Brony fandom is not exactly an organic one; it’s more farm-raised. But they are vocal and very passionate about their ponies. Social psychologists have painted Bronies several ways. One study sees them as men-children, running from the realities of the recession and the post-9/11 world and taking flight in the fanciful world of the ponies, while another posits that they are men uncomfortable in the world of masculinity, who find validation in a sphere that promotes positive values like cooperation and emotional openness that may be typically seen as feminine.

Laurent Malaquais’s documentary Bronies: The Extremely Unexpected Adult Fans of My Little Pony profiles several Bronies, some of whom are children. The boys are the most affecting subjects, since their fandom for My Little Pony feels the least driven by any kind of desire to fit in on the Internet. They just like the ponies. The documentary aired on LOGO TV, the gay-interest channel owned by MTV, best known for the impeccable reality game show RuPaul’s Drag Race. Bronies who are public about their fandom tend to be labeled gay by their peers, and the Bronies are very aware of everything that’s wrong about that structure. One Brony is essentially gay-bashed at a gas station for wearing a T-shirt with the colorful magic ponies on it. The Bronies try to be understanding and empathetic, to listen to each other and be kind instead of brutish. It emphasizes how narrow the definition of true masculinity can be that anyone who deviates from tradition in any way risks being labeled as feminine or homosexual. And Bronies, like all of the women and queer people before them, start wondering What’s so bad about that? One kid from a small town whose dad is especially conservative convinces his father to come to BronyCon, so he can meet other dads whose kids have come out as Bronies. The dad is thawed a little by The Manliest Brony in the World.

In a climate in which alpha males are idealized beyond all measure, but the moral contradictions inherent in alpha maledom are more obvious than ever, Brony culture feels downright progressive. You don’t have to like My Little Pony: Friendship Is Magic to empathize with them. They are every nerdy kid who has ever confessed to liking something they were not supposed to like because it marked them as gross, as weird, as different. Sure, the Bronies also occasionally threaten to overwhelm the ranks of the actual fan base of My Little Pony, girls sometimes known as Pegasisters, who may feel slightly weirded out by the presence of adult men in Fluttershy costumes. While it’s still very taboo for men to admit liking media that’s been coded as female, women have almost no choice but to consume male-centric things, since they make up the bulk of media. But that is why the Bronies have their own convention, which is basically just a specialized cosplay convention, where they can assume their true Brony form and roam free. Bronyism has been cited as an example of the amorphous concept of “New Sincerity.” And according to Urban Dictionary, the term “Brony” is actually free from gender. Ladies is bronies too!

Malaquais’s documentary also focuses on some of the show’s voice actors, who are treated like rock stars by Bronies. Faust makes a surprise appearance at the biggest BronyCon toward the end, crying when she sees the rabid sea of fans. Faust actually left My Little Pony after the first season, although it continues on without her. The reasons for Faust’s departure from the show are unspecified, although Internet speculation suggests it boiled down to artistic differences between Hasbro and the show’s creative staff. She expresses regret that she left the show before doing all the things she’d imagined doing with it. Perhaps she wanted the ponies to get darker or stranger than Hasbro would allow, or maybe she thought the ponies should value the harmonic element of “anti-consumerism.” Whatever the actual reason, Faust is clearly touched by the Brony outpouring of love for her creation, and it’s hard not to be touched as well. Faust sums up the fandom’s appeal: “These Bronies are taking these lessons to heart. We need to allow men to be sensitive and to care about one another, and not call them weak for caring.” One especially poignant moment shows a meet-up of military Bronies, who all confess to thinking they were the only Brony in the armed forces and being afraid to poll their fellow soldiers to see if anyone else stanned for Pinkie Pie. Both genders need to keep broadening their own definitions, and maybe even abandon thinking along those lines altogether. Everypony deserves better.