The Parenthood Cry of the Week: Joni Mitchell Week 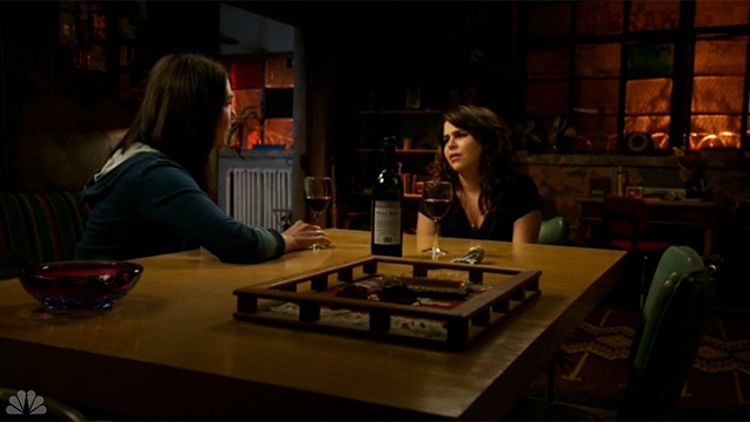 After what might have been Parenthood’s worst episode ever last week (at least if you’re judging by the amount of crying), the show went meta this week. It was the unofficial Joni Mitchell Week. Listen to this playlist as we explore emotional highs and lows.

Ryan has to go and the Amber engagement plotline must end. For all its sentimentality, Parenthood keeps its characters consistent. Yet the Amber and Ryan story belies everything she has become. She made some reckless decisions in the past, but the Amber of Seasons 3 and 4 was wise, stable, and mature. That Amber would not be marrying someone without knowing the whereabouts of her fiancé’s father. Usually a couple picks a wedding venue after the groom tells his bride-to-be that his father is dead.

Parenthood’s emotional realism is not limited to the maudlin, and Drew, Adam, and Crosby were the beneficiaries of a little whimsy this week. Drew got friend-zoned by his Joni Mitchell–loving crush. Actually, unbeknownst to Drew, she only knows one song, “A Case of You.” This song is now the unofficial anthem of Parenthood because the devastating James Blake cover was used in Season 3. (It scored a scene with Zoe and Julia.) Considering that this show has a section on its website devoted to the music, I highly doubt the song choice was coincidental. So with a wink from the writers, Drew’s crush introduces the musician just like a college freshman would. Even though it’s Mitchell’s most-played song on Spotify, she says he might not know it because “it’s a little bit old” and “a little bit different.”

The Joni Mitchell gag then produces a moment for the Adam Braverman highlight reel. Drew seeks out Adam and Crosby’s expertise to use Mitchell to get into the “fun zone.” Adam does an embarrassing dance, Crosby talks about the time he pretended to be a vegan for a year, we learn that the track “Raised on Robbery” takes you straight to the “bone zone,” and I’ve never wanted to be a Braverman more. Just watch.

Grandpa Zeek is mostly a waste. He and Camille rarely have meaningful story lines that connect with the rest of the clan. The notable exceptions come when Zeek enters an ongoing narrative to save the day, forsaking proper names for the generic terms of “grandkid” or using formal military language. When he dropped a “seventeen hundred hours” in conversation at the top of the show, Zeek was bound to figure in one tear-worthy scene. Julia tasked him with disciplining her kids, Sydney and Victor, so he put them to work fixing up an old car. Manual labor should have put Victor and Sydney on level ground, but she still showed him up by reading the manual faster. Luckily, as Zeek explains, he has nothing to do, so his new project is Victor. Zeek is going to teach his new grandson to work on cars and read at the same time. It was a little contrived, until Zeek shoots an exaggerated and very sweet wink to Julia, who was watching from a distance. Then I teared up.

Aside from Kristina’s cancer plot last year, I find the fights and subsequent reconciliations between Sarah and Amber to be the most wrenching. Sarah, currently without boyfriend, is occupying herself by dutifully mothering her daughter, pointing out the glaring problems with Ryan. His similarities to Amber’s father are what caused their breakup last season in the first place, though she refuses to see it now. Although the relationship is implausible, the family tension resonates. They have to negotiate an adult friendship with their mother-daughter relationship. They have to go from drinking wine and laughing in Amber’s apartment to Sarah confronting her daughter in the backyard where Amber spent formative years. This is Parenthood: Even a dumb story line produces compelling moments. I’m choosing to ignore that after Amber declared “I’m not you,” all I could hear was “I don’t want your life.”