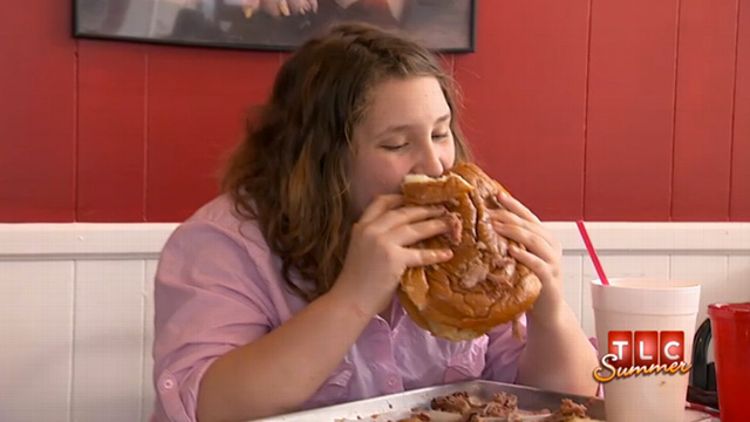 The pumpkin is a seasonal gourd, usually brought to consumer markets at the end of autumn. It is an underappreciated multifunctional gourd, utilized for both recreational and culinary purposes by the majority of Americans. Families carve pumpkins into jack-o’-lanterns on All Hallows’ Eve, then pour cans of Sara Lee pumpkin mix into frozen pie shells to bake pumpkin pies on Thanksgiving. It is somewhat fitting that “Pumpkin” is the nickname of one of June “Mama” Shannon’s daughters. This gourd is almost more American than hot dogs, hamburgers, and apple pies, but it never gets the credit or recognition as being more than a novelty holiday symbol.

In the latest episode block of TLC’s reality drama Here Comes Honey Boo Boo, we finally get to know Lauryn “Pumpkin” Shannon. She is the oddball of the family, but her existence might mirror the pumpkin she is named after more than we all even realize. The episode gave us the chance to appreciate Pumpkin after finally disclosing the most definitive moment of her life. Pumpkin was struck by lightning while playing a video game and she has never been the same since. The family sees her as a lovable oddball, but it is only because they understand the pain and trauma of being struck by lightning. While the passing of electrons through your body results in instantaneous pain and shock, coming to terms with your survival odds in myriad dangerous situations can be almost impossible after you beat the odds to be struck by lightning. Shark attacks, plane crashes, and four-wheeler accidents seem imminent after you’ve been struck by lightning.

On Pumpkin’s birthday, the family curates a special event. They dine at a local barbecue restaurant so Pumpkin can take on the biggest challenge of her life — defeating the Pigzilla sandwich. If she finishes the three pounds of pulled pork and one-pound bun in less than 45 minutes, she will get the sandwich for free. While the food challenge might be on trend with the well-publicized glamorization of binge eating in America, Honey Boo Boo also uses the Pigzilla sandwich to further comment on the farm-to-table movement in the culinary arts and food scene. Utilizing local meat and produce results in reasonable prices for consumers without the shipping and taxes associated with imported farm goods, and “going local” guarantees freshness and long-term sustainability for regional independent farmers. Three pounds of meat is a huge serving size, but when the meats are sourced from humane farmers creating a quality product, it is really just proof that the regional economy is thriving.

Mama June encourages Pumpkin to be the best competitive eater she can be, pursuing the title of “Redneck Kobayashi.” After Takeru Kobayashi’s ban from Nathan’s annual hot dog eating contest, he is no longer a visible brand in the American competitive eating scene. The rift between the eater and the notable Fourth of July contest was caused by a bitter contract dispute in 2010, but the episode proves his legacy as the greatest of all time still carries weight in rural American communities. This might be a huge blow to the competitive eating scene’s viability as a major American sport without Kobayashi, but it is also indicative of our immersion in an attention economy where too many pseudo-sports exist. As the NBA has proven, without stars, a league is simply not entertaining or followable to casual fans. Pumpkin eventually fails the Pigzilla challenge, but her passion for eating pegs her as more than just the family oddball. She has passion and drive, but can she find a Pigzilla to conquer in her own life?

In other news, we also learn that Alana “Honey Boo Boo” Thompson has taken a break from pageants. Stripping Alana of her identity as a pageant queen was a bold decision by show writers, but the rabid fan base should look forward to Honey Boo Boo’s life after pageantry. Realistically, Honey Boo Boo was unlikely to get fair treatment by pageant judges after becoming the poster child of modern child pageants. Similar to her decision to let Pumpkin take on the Pigzilla, Mama June knew she had to find a new constructive outlet for Alana to mold her own identity. The decision to enroll Alana in tap dancing classes is certainly a meta decision to provide commentary on their role as entertainers. In a way, sharing their lives with us marginalizes their family into a gimmicky vaudeville-style tap dancing routine. They are acknowledging the duality of their existence as entertainers, writing their own version of Nirvana’s “Smells Like Teen Spirit” by simply enrolling Alana in tap dancing classes. Her tapping is a metaphor for the noise required to sustain a follower’s attention in these modern times.

In the second half-hour of this week’s Here Comes Honey Boo Boo, the focus switches from Pumpkin back to Sugar Bear. As was documented last week, the show seems to have a completely new focus on the evolution of Sugar Bear from cold, awkward man into a warm, loving father figure who isn’t afraid to show emotion. In a house where all the women continue to eat and fart at will, Sugar Bear realizes the importance of creating an official family unit. He is desperate to formalize the family structure to not only demonstrate his love for the girls, but also give Mama June the affection she is so afraid of embracing. It is no surprise that a new character enters the picture: Chubbs’s boyfriend. The introduction of Phillip as Jessica’s boyfriend is meant to further demonstrate the dedication of Sugar Bear to June. Chubbs and Phillip’s young love is naive and innocent, but Sugar Bear’s love for June has ripened over many seasons. Sugar Bear declares, “She’s getting ripe for marriage, and I’m going to pick her.” Once again, the metaphor extends back to the strong farm-to-table agenda that the show is promoting as a whole.

The season’s most vulnerable moment occurs when Sugar Bear asks Mama June’s daughters if they will give him permission to marry their mother. While this conversation is usually reserved for the father of the bride, Sugar Bear’s conversation demonstrates the breakdown of the traditional familial unit in America. We can’t be sure that Mama June’s father is still in her life, serving as further indication that she is wary of commitment to any man. But Sugar Bear is desperate to put an end to this cycle of fatherless daughters in their household. After getting permission from the girls, it is time to get a wedding ring from a local pawn shop. Sugar Bear must make one sacrifice in order to purchase the ring of his dreams. He pawns his prized turkey fryer to get $40 of in-store credit. This act demonstrates the compromise and sacrifice required in a successful marriage. The wedding ring ends up costing $385.52, which was actually a thrifty, prudent purchase in a competitive wedding landscape where grooms must maximize their credit lines in order to finance the blood diamond trade in Africa.

Sugar Bear put on his “funeral shirt,” which is a nice Oxford-style button-down, most likely from a nearby Kohl’s, Marshalls, or Ross. It is only fitting that Sugar Bear proposes to Mama June in her stockpile room, filled with hauls from extreme couponing. Marriage is actually a contract to divide property and earnings in half, and the golden egg that Sugar Bear places the wedding ring will be halved as well. At one point, Sugar Bear claimed his mind was racing “like two squirrels in a wool sock.” This simile speaks to the chaos in the house that Sugar Bear is trying to end. Marriage could mean moving forward, getting a larger house that comfortably accommodates the family, releasing the squirrels from the wool sock. The episode utilized the popular narrative tool of the cliff-hanger, so we won’t know Mama June’s answer for another week. Until then, we are haunted inside the tortured mind of Mama June. Will she free her family from the wool sock, or is life inside the dark chaos of the sock the only world she knows how to control?

Young Hova, All Grown Up: A Nickname-Based Analysis of Jay Z's Aging