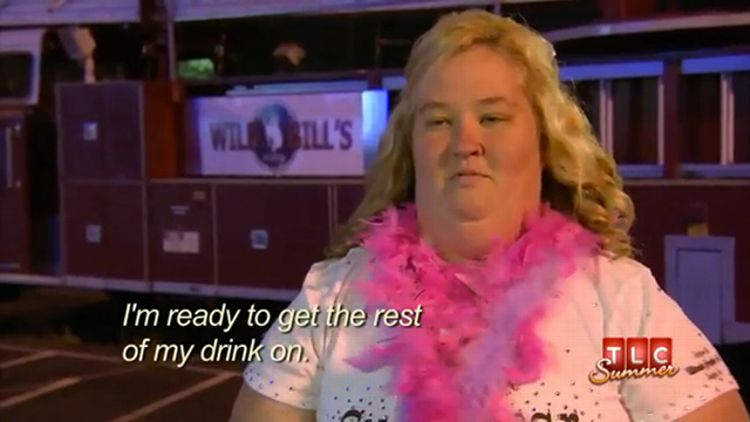 Next week is the season finale of Here Comes Honey Boo Boo, and this week’s buildup show before the two-part finale did not disappoint. Television critics and audiences usually find themselves let down at season or series finales because of insurmountable expectations on the artistic execution of the show. Fans turn to social media to deconstruct the intentions of a show’s entire season. Season finales are under pressure to put a bow on the thematic direction of the entire season, often forcing viewers to digest a lesson that they aren’t comfortable with.

As always, Here Comes Honey Boo Boo challenged us to look inside of ourselves, posing deep questions about the consequences of American hyper-normalization. As we become more tolerant, are we only becoming more indifferent? Barack Obama’s impending decision to launch air strikes against Syria has shattered the image of HOPE, CHANGE, and PROGRESS that elected our president twice. Instead, another president will choose to use the car keys to pretend that we still are the world’s police.

A Hummer limo arrives to pick up June and her girlfriends for a night on the town. The decision to showcase this extinct vehicle was extremely necessary to highlight America’s foreign policy in the Middle East since Operation Desert Storm. The Hummer was first created as a military vehicle in the early 1980s, but eventually gained consumer appeal as a civilian automobile. The vehicle was successful during the 1990s and early 2000s as suburbia became a sick show of excess. People who had the biggest homes and wasted the most gas were catapulted to the top of the suburban caste system.

In 2010, the Hummer was discontinued. However, the legacy of the Hummer still lives on in the widely available Hummer limousine. The vehicle might be the the perfect transport for any sort of wild night on the town. It was the perfect place to see June and her friends twerking all over one another. It’s no surprise that producers chose to run this episode after Miley Cyrus’s VMAs fiasco. Do we care if great big fat women are twerking in the privacy of their own Hummer limo? Are we outraged when a man in a thong is giving women lap dances on widely available cable networks?

In order to confront female body issues in a thoughtful, realistic way, the girls take June bra shopping. Her daughters are concerned about her pancake-shaped breasts degrading her wedding dress. There are many references to the pull of gravity on your body over time. Gravity is the cruel reminder that are all sinking toward the grave every day. June does find a way to perk up her 42E breasts, but even she seems to understand that a new bra won’t change anything. One day she will die, but at least she brought life into the world four times.

On a different note, it is important to applaud the editing done during June’s bachelorette party and Sugar Bear’s simultaneous bachelor party is some of the best work I’ve seen in the last decade. There is a violent tonal juxtaposition between Sugar Bear’s sensitive bachelor party, and June’s raging, male-stripper-filled night. We think of men as wild, untameable creatures that are instinctually driven to spread their seed. In a post-feminist society, women have actually taken on the flawed traits of men, perhaps even becoming what they once hated.

One of the great reveals of the episode came when the girls played a game called Mystery Mouth. The game itself is a threat to the entire board game industry, since it requires no gaming pieces. Tablets, Wi-Fi-enabled gaming consoles, and other handheld devices can never compete with a game that costs nothing. The rule are simple — one person puts multiple types of food or household objects in his or her mouth. Then the other players must guess what is in the person’s mouth. The game tests your awareness of food and other objects within the household, important life skills for any growing teenager.

Mystery Mouth provides commentary on the consequences of processed food on the human digestive system. The claim that “you are what you eat” is true. However, most Americans are unfamiliar with the ingredients they are ingesting. Particles of metal, diced animal bones, and miscellaneous garbage remnants might be in our food. But we choose to take a blind eye to the problem. America’s obesity epidemic has been created by our tolerance for unhealthy living in the name of being tolerant of all shapes and sizes of people.

Girls in Hoodies Podcast: The Mileycast