The Overplayed Song of the Year Death Match: ‘Somebody That I Used to Know’ vs. ‘Call Me Maybe’ vs. ‘Gangnam Style’ 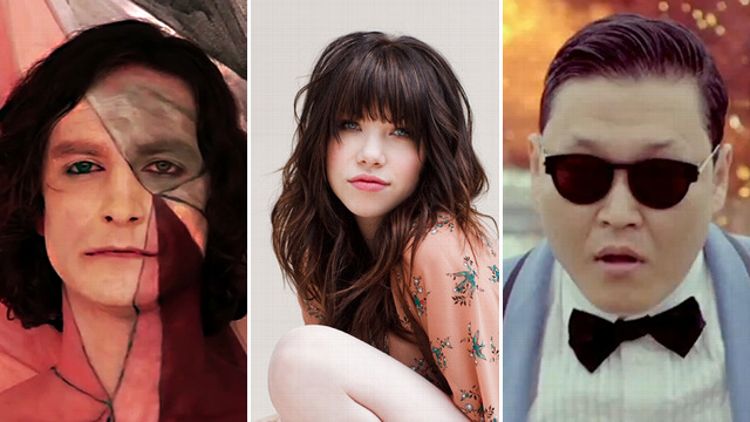 In the world of overplayed songs, a lot is gained via hindsight. It’s easy to say you hate-hate-hate that Pink song when it’s tearing up the charts, but by the end of the year its offensiveness may be but a faint, forgivable whisper next to the more lasting legacy of its pop superiors. With that in mind, we here at the Overplayed Song brain trust figure that now is as good a time as any to look back and see which of the monster tracks should truly hold the title of Overplayed Song of the Year. As always, the term “overplayed” isn’t merely a measurable statistic of radio play or iTunes downloads, it’s also a feeling, a arguable level of saturation into the fabric of popular culture.

In 2012, much like the baby Jesus, three gifts were brought to us from faraway lands: South Korea, Australia, and British Columbia. Which was enduringly brilliant gold, which was the sweet-smelling but cheap frankincense, and which would be better used to embalm dead bodies? We are about to find out!

Gotye featuring Kimbra, “Somebody That I Used to Know”

WINNER: PSY (Nearly tripling the competition on YouTube trumps lackluster Billboard performance, and as much as I like tracking the charts — it’s music sports, you guys! — YouTube performance has more cultural cache.)

I’m not afraid to fake my way through a Korean pop song at karaoke, but for casual car-jammin’, this is really a contest between Gotye and Carly Rae. Going to narrowly award this to Gotye — “Somebody” is slower and thus easier to remember the words to, and who doesn’t like the whisper/shout contrast between the verse and the chorus?

Seeing as there is actually a built-in dance for “Gangnam Style,” this is an automatic win for Psy. Even though I can’t figure out how to do the horsey dance, everyone else living in the known universe and also Britney Spears seems to have it down.

Well, this is definitely better than those creepy kids in the car.

“Call Me”‘s harmless bubblegum pop was ripe for enweirdening, and Dan Deacon stepped right up to the plate and hit this one out of the park. (It gets really good at the 3:20 mark.)

I’ve mostly sat out on the “Gangnam Style” parody-video phenomenon because the original sits so perfectly at the intersection of strange and cool and right on the cusp of “totes rando,” and all it needs is a little push from a bunch of nerdy college flash mobbers to send it over the edge. Doing a beat-for-beat “Gangnam Style” re-creation with your buddies is kind of like doing a 1,000-piece jigsaw puzzle — a time-consuming and laborious effort that nevertheless ends up exactly the same as everyone else’s. With that said, hey, look: Ai Wei Wei made a “Gangnam Style” parody video.

“You can get addicted to a certain kind of sadness.” — Gotye

“I wasn’t looking for this, but now you’re in my way.” — Carly Rae Jepsen

“I’m a guy who goes completely crazy when the right time comes, a guy who has bulging ideas rather than muscles.” — Psy

I guess what makes “Somebody” still “alternative” at this point is that it’s a breakup song without a positive bent to it; unlike those lines all over Gotye’s face, it only goes in one direction (no, not that direction). And that’s good and all when you just want the person on the radio to be sad with you, but when aliens are searching through the wreckage after the Mayan apocalypse I’d be embarrassed if they found out we had crowned this mopefest as the popular musical statement of the year.

Psy’s goofy, repetitive anthem is far more fun, and actually pretty strong as a statement of purpose, but a little too tongue-in-cheek to be a pure distillation of what 2012 felt like. I’m giving this to “Call Me Maybe,” a highly superficial ode to accidental crushin’ — the whole song is an improvised, spur-of-the-moment come-on, and for THE summer jam of the year, there’s nothing much more quintessentially summer than that. It’s also refreshing, after so many nihilistic, maximalist dance tracks taking up the airspace, to have a song about a fling that doesn’t sound completely self-destructive for once. If the past few years have been full of defiant reactions to our plans going to shit, “Call Me Maybe” is an appreciation of the good things that can pop up when you least expect them.

Which Song Is Emily’s Favorite?

Maybe it’s because I stayed away from most of the parody videos. Maybe despite that, I like the idea of a song so democratically taking over — nobody planned on this song blowing up in America, nobody had engineered this pudgy thirtysomething for world domination, it just happened to be the right thing at the right time. I love how Psy just relishes every line delivery; I love the part in the video where he’s about to put the moves on HyunA and then the chorus hits and they just dance instead. That’s perfect! That is a perfect image.

And sure, maybe you’re sick of it, and maybe it could definitely take a rest now that it has broken every record that matters (or Psy could at least put out another song), but remember when you puked outside your dorm in college after drinking half a jug of Carlo Rossi on a dare? And remember how you were like “All alcoholic beverages are gross, I am never drinking again”? And remember how you were totally hitting the Chuck again the next weekend? A good overplayed song like “Gangnam Style” is our collegiate substance abuse problem, and eventually we learn that if we don’t overdo it, we can enjoy it a lot more.

“Somebody That I Used to Know”: 1 point