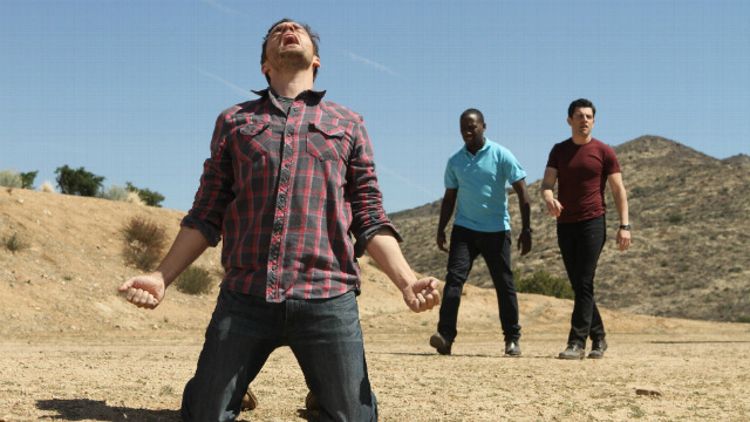 Every May, the network fat-cats kennel their white tigers and head to New York City for the advertising pep rally/celebrity burlesque review known as the upfronts. Initially conceived as an industry event, a chance for the broadcast nets to unveil their fall schedules to assembled advertisers who, in turn, will shell out enough dollars to keep Burbank flush with development cash for another year,  the upfronts have morphed into genuine public spectacle, a breathlessly reported-upon State of the Union for the Big Four. Buoyed by canapés and perhaps a monologue from Jimmy Fallon, the audience of beat reporters, unwashed bloggers and shampoo reps are encouraged to buy in to the scripted optimism on display. What’s funny – certainly funnier than Jimmy Fallon’s monologue – is that the same speeches will be made at first place Fox and last place NBC: an annual promise that these new shows with their pedigreed casts and gauzy gag reels are destined to become great big shining hits. In the bright lights of a midtown hotel ballroom, it’s more than possible to believe that stinkers like Pan Am will take flight or that disasterpieces like Work It just might work out. After all, it’s springtime. Anything is possible.

But it’s not, really. A vast majority of new shows fail – some bombing out after less than a month. What’s often lost in the free-fall from hope to hiatus is just how much of a year-round crap-shoot it all is. Merely making it onto the air is a near miracle: for every show that goes to series, there were numerous pilots that were made and rejected, countless scripts commissioned and buried, untold pitches heard and forgotten. Network television is a messy, panic-driven medium, a last-minute mash-up of best-we-coulds and hope-for-the-bests with room for commercials. By the time a DOA sitcom like NBC’s Free Agents debuts and dies on our DVRs, it’s already endured months of tweaking, fiddling and meddling. It was a hardened survivor well before it was a fresh-faced victim.

But such struggles aren’t reserved for the goners. Consider the case of Fox’s New Girl – the belle of last year’s upfronts ball which ended its first season in fine form last night. By most metrics it was the biggest success story of 2011’s freshman class. Its script, by Diablo Cody cohort Liz Meriwether, was stellar, its cast, toplined by thrift-shop pin-up Zooey Deschanel, was stacked, and the pilot, directed by Apatow lieutenant Jake Kasdan, was a delight. When the series premiered in September, it was an unequivocal hit, garnering over 10 million viewers. Creepy billboard were erected, gushy profiles were written, ironic spectacles were purchased. The show was given the first full-season pickup of the fall. But in television it’s precisely when things seem to be clicking that the real work starts.

To begin with, the strength of the pilot was also its biggest weakness. Deschanel’s Jess was a unique heroine for the small-screen, a cutesy catastrophe in a cardigan and saddle-shoes. Deschanel’s performance was winning, even if Jess was an unqualified loser, forced to move in with three slackery bros after catching her boyfriend touching bathing suit areas with another Fleet Fox. Building a debut episode around a Dirty Dancing-binging, inappropriate sex-grunt-uttering ladydork is bold and eyeball-attracting. But constructing a season around her is something else entirely. As anyone who’s ever been to a craft fair can tell you, what’s eccentric quickly becomes unbearable. The trick was modulating Jess without flattening her from New into old hat (although an old hat is something Jess would absolutely overpay for at an estate sale). ABC’s surprise renewal of Happy Endings, which forced Damon Wayans Jr. to move out of the loft after the pilot, only added to the challenge. Showrunners Meriwether, Brett Baer and Dave Finkel were already tasked with expanding the world of the show; now they had to find room for new guy Lamorne Morris, too.

Early episodes got by on a clumsy mix of charm and the producers’ deep Rolodex. Everytime Jess’s behavior became impossibly twee – being thirty years old and unable to say “penis,” for example – there was another ace guest star around to pick up the slack, from Lake Bell to Lizzy Caplan. And while Morris’s Winston remained little more than an interim Coach until quite recently, the other two roommates emerged as the backbone of the show. As the surprisingly tender barman Nick, Jake Johnson combined a Belushian languor with a hilariously short-fuse; New Girl improved exponentially every time Johnson was given a long list of things to recite, whether it was directives from a pretend Oval Office or bearded rantings from an unearthed home video. And Max Greenfield, as Schmidt, snatched the spotlight like it was the last bottle of Axe in the clearance aisle. The initial parody of an Ed Hardy boy quickly softened and, thanks to Greenfield’s winning smarm, Schmidt was reborn as a harmless ladykiller, a type-A recovering fattie with room in his heart for more than hair cream and David Guetta records. By the time the finale rolled around, Schmidt could roofie someone and still avoid putting a dollar in the douche jar. The midseason, manhood-mangling Schmidt and Cece sextacular was inevitable, but the romantic sweetness that followed wasn’t. (Sometimes the best decisions on television are the least planned, twists borne out of an excess of chemistry and a lack of time.) This surprisingly affecting pairing provided necessary cover for New Girl while it sorted its other roommates out, pinging Jess from suitor to suitor like Goldilocks with an extensive vinyl collection (this one is too soft, this one is too stiff, this one is just right — but we need to delay until fall sweeps!).

Along the way New Girl produced some of the funniest, most satisfying half-hours on any network (“Fancyman Part 1” and “Secrets” being particular favorites), but equally fascinating were the failures. Episodes like “Kids” (in which a child falls in love with Nick and Jeanne Tripplehorn is recruited for her comedy chops) and last week’s “Backslide” (in which Jess learns a lesson after sleeping with a guy, forcing him to confess to his girlfriend and then brokering their engagement; or, as my therapist would call it, “Jesus Fucking Christ!”) were so clunky it was hard to believe they were the same show – until, at least, Schmidt started in on Winston’s ill-advised earring (“Captain Black Sparrow”). Still, I don’t think it’s too inside baseball to take pleasure in watching a new program’s inevitable growing pains. The network schedule is so insanely demanding that what winds up on screen often has more in common with a basement rehearsal than a sold-out concert. When we see something click– the mutually silly spark between Deschanel and Johnson, say, or Morris transitioning Winston from chill to shrill – chances are the showrunners are seeing it for the first time, too. TV is relentlessly Darwinian, and watching a hyped series evolve into a good one is as close to the Galapagos Islands as you can get – without changing the channel to NatGeo or something.

The show that ended its season last night with the very strong, very funny “See Ya” (highlights: Nick dancing, “Breakfast at Tiffany’s,” Thomas Lennon as new roomie Neal, “he’s a Jew in the desert, I don’t want him to wander,” Nick dancing, Schmidt’s inability to say “wolf,” and Nick dancing) was a very different Girl than the one we were introduced to eight months ago. Meriwether’s pilot script was ballsy and blowsy, all jokes about bangs and banging – a broad comedy starring a very goofy broad. But the New Girl has become one of the better shows on TV by becoming something else entirely. As the tiresome whimsy faded, it was replaced with a keen observational eye for the foibles and false-starts of twentysomething life. The boys in the loft wrestle with issues of money, career, love and responsibility almost as much as they wrestle each other. And Jess went from being an arrested womanchild to a plausible human being, able to wish happiness for others without construction paper and bad cockney accents – and capable of waiting at least ten seconds after an emotional moment before pretending to be a coyote. (Sure, at episode’s end, Deschanel is still dancing in her PJs but at least it’s to AC/DC.) In a strange, goofy way New Girl has morphed into the ideal comic bookend for Lena Dunham’s Girls. Less nudity and hate-fucking, sure, but the same shame-free devotion to the screwy, mistake-filled path towards adulthood. (And at least one more African-American character, to boot.) Over the course of a long season, New Girl became markedly less adorkable. But by doing the hard work required to transcend its catchphrase, it’s in much better shape: bolstered by a strong cast, with plenty of room to grow. Just like Schmidt’s broken penis.

Shadows of Greatness: How Tim Burton and Johnny Depp Lost Their Way