The Movies of 1994: Mel Gibson and Jodie Foster, the Odd Couple of ‘Maverick’ 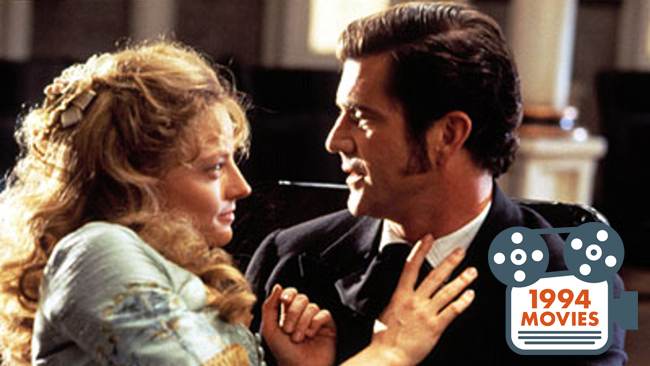 In the year 1994, the movies were great. Greater than usual. Blockbuster or indie, rom-com or action thriller, there was something indelible about so many of them. Throughout 2014, Grantland will look back at some of the most memorable, beloved, and baffling releases of that magical time around their 20th anniversaries. Today: Wesley Morris on Maverick, released May 20, 1994.

In 1994, the top 10 box-office stars included Tom Hanks, Jim Carrey, Arnold Schwarzenegger, Tom Cruise, and Harrison Ford. Mel Gibson came in at no. 7. He spent 13 years in the top 10. There was a long stretch when he was one of the very best things in the movies. It was a mix of handsomeness and intensity that we hadn’t seen before. Gibson could act. He could run. He could suffer. In Maverick, he does none of them and is still a star. He didn’t make many comedies. He was prone to pain and torture, to rawness. The opening shot of the movie must have been a joke. It’s Gibson on a horse with a noose around his neck. If the horse moves, he hangs. In a Lethal Weapon movie, there wouldn’t have been a horse.

Maverick has Bret Maverick on his way to a poker tournament on an Old West–era riverboat. He first stops into someplace called Crystal River to pick up money he’s owed, runs into the men who left him for dead, and, at the poker table, meets a lady named Annabelle Bransford, who’s played by Jodie Foster. Gibson was part of a famous duo with Danny Glover, but he accessorized with almost anyone. (Glover cameos as a bank robber in Maverick; Gibson gives him an incredulous look and Glover returns it, hightails it out of the bank he’s just blown up and says, “I’m getting too old for this shit.”) And Foster might be his best sidekick. He was 38. She was 30. And if, at the present moment, the idea of these two rubbing their mouths together is unappetizing, see Maverick. You’ll be able to call it kissing.

The previous year, audiences were asked to believe that a Jodie Foster character would accept an impostor Richard Gere into her bed. But that wasn’t the problem with Sommersby. The problem was that anytime these two got near each other my stomach would rumble. Sommersby is still the best example I can offer for bad romantic casting. Foster and Gere never looked relaxed. When they touch — when they look at each other, really — they make faces seen only on people strapped into a polygraph. It wasn’t just that she was gay and he, at the time, was rumored to be. It had more to do with the vagaries of human connection. In Sommersby, these two humans didn’t connect. In Maverick, they did.

And that’s the miracle of Maverick: Gibson got Foster to relax. William Goldman’s script keeps throwing you curveballs. Annabelle is a con woman who keeps conning Bret. You don’t trust her not to pull one over on him. In another movie, this would have been a love-interest part. But if you cast Foster, she’ll seem too intelligent to be Wild West hooker. The movie has to be as smart as we think she is. This has to be one of the last times that a Hollywood movie thought this way. Now, you probably just go with whomever wants to ride in the sidecar of Male Star X. 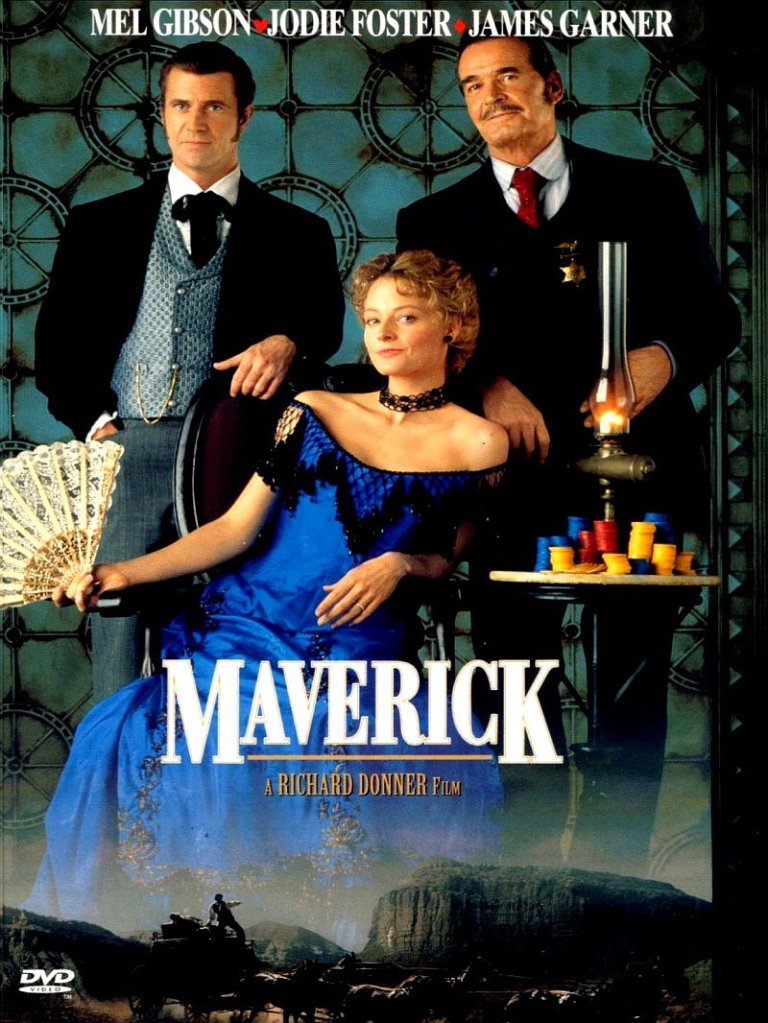 Foster is The Girl, but Goldman gives her something to do. It’s a good part that no one had ever seen Foster play. Or it had been so long that we’d forgotten she could. Waving her hand, clutching a parasol, wearing a blonde wig that swings down her back, and using a Southern accent so bad it winks at you, Foster does a parody of what’s ladylike. She’s a klutz, for one thing. For another, Gibson refuses to treat her like a lady. So she’s always kind of being appalled at his insults while trying to find a way back on top of the banter. (She doesn’t.) I’m not arguing that it’s a masterpiece of romantic comedy. Of course, you can’t argue that it’s romantic comedy at all, because the movie keeps pulling the rug out from under these two. The love here is a con and that still feels fresh. Somebody also knew that it couldn’t push that too hard, either.

In any case, Foster’s acting in Maverick. Gibson is being. At some point she and James Garner, who played Bret Maverick for five seasons on ABC, drop out for about 20 minutes and Gibson gets to mix it up in a good couple of passages with Graham Greene, who pretends to be a stiff, stock Native American only to reveal himself to be the sort of cool, cynical stock Native American who complains about having to make a living pretending to be a savage. It’s a good Goldman showbiz in-joke that anybody can get. These scenes are digressive but fun. When you’ve got a star who an audience loves, you go on these tangents. We’ll follow. Gibson was that kind of star.

He’d worked with the director Richard Donner before on the first two Lethal Weapon movies, and there’s a lightness here that makes the runaway stagecoach pretty funny as action. In 2014, it looks like old-fashioned Hollywood stunt-craft that plays Gibson’s daredevil self-imperilment as a joke. The movie has too much live-from-the-Ponderosa music. And why do movie trains generate that much smoke? The finale isn’t a plot twist so much as the ending of a movie we hadn’t been watching. However, it’s amusing, and it doesn’t sell the movie out. It was just fun and manages to let all three stars win, which is a rare stroke of generosity.

These were happy times. Gibson was the sexiest man in the movies. Hands down. Even his puffed Michael Landon hair and sideburns in Maverick work. He’s shirtless here at least four times. In his prime, Gibson was always shirtless. It was a noncontractual obligation, like Tom Cruise’s sprinting, Eddie Murphy’s laugh, and Michael Douglas’s libido. In 2005, Matthew McConaughey was still being invented. His swagger is comparable to Gibson’s — so were Russell Crowe’s and, to a different extent, Gerard Butler’s. It’s hard to believe, but only once was Gibson voted People’s Sexiest Man Alive. It was 1985, when he was the hot guy from those Road Warrior movies. He hadn’t yet cracked the box office top 10 in 1985, when Michael J. Fox and Chevy Chase were in the top five.

Having him be the winner for 15 years doesn’t sells magazines, but 1987 Mel Gibson beats 1986 Mark Harmon and 1987 Harry Hamlin every time. But maybe there was something cautionary in People snubbing him all of those years. No one had ever turned psychopathology into heroism; and, if we’re being honest, loving him meant loving a lunatic persona. Gibson’s nervous-breakdown stardom lasted from Mad Max to Hamlet, Braveheart, and Conspiracy Theory to his direction of Jesus’s crucifixion. We liked him crazy and eventually paranoid. But there was a limit.

It’s not 1987 any more. It’s not even 2002, when Gibson was still a draw. That was just before the world discovered that an anti-Semitic, alcoholic Christian fundamentalist had been baked into the beefcake. In the aftermath of his leaked rant, it was initially alarming to see Foster and Glover and Whoopi Goldberg come to his defense. But their support became sort of touching. You don’t watch Maverick and get nostalgic for 1994. You watch it and realize that Gibson’s psycho had taken a holiday, that maybe Foster had put him at ease, too. The film was written and directed by Jewish men. Glover pops in for a cameo. He pals around with Native Americans. He flirts with and beds a lesbian. It’s a summer movie, sure. But now it feels like a pre-defense, too.