‘The Leftovers’ Despair-o-meter: Ranking the 10 Most Depressing Moments So Far 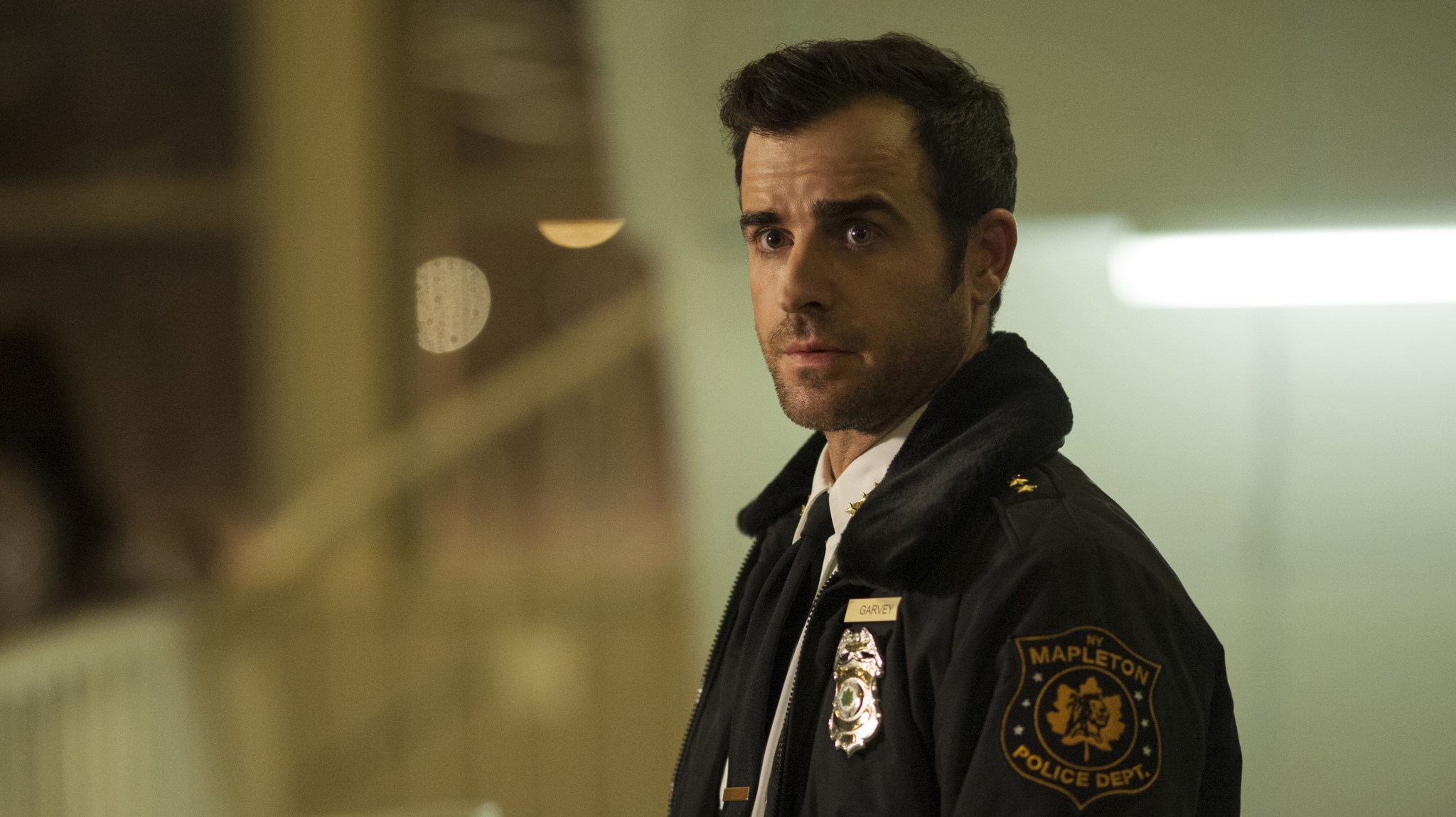 Do you have too much joy in your life right now? Bored by endless summer nights sipping crisp, tart sangria with friends and loved ones? Have you been occasionally forgetting to twist in anguish over the cruel vicissitudes of fate? Fortunately, The Leftovers has your back: It’s the prestige television equivalent of a cilice. If nothing else, Damon Lindelof’s new show has excelled at demonstrating how the inexplicable disappearance of a mere 2 percent of the world’s population could suck all mirth and meaning from the planet, forcing us to confront the existential horror simmering just under the surface of that random, trivial road trip we call human existence.

Any given episode is enough to make you bail on family board game night, draw the blinds, and sit in the dark puffing on Marlboros while you watch a water stain slowly obliterate your wallpaper. Frankly, The Leftovers should come with a surgeon general’s warning. So, as a public health service, we present the 10 most depression-inducing moments from the first four episodes of The Leftovers, along with the number of sad cigarettes they’ll force you to smoke to numb the pain.

Jill’s BFF, charmingly dysfunctional Aimee, has been The Leftovers’ sole ray of caustic sunshine. Somehow she has sublimated her share of the world’s collective grief into making flirty eyes at her best friend’s dad and playing Nancy Drew when she notices the town martyr, Nora Durst, carrying a revolver in her handbag. But even Aimee can step in a pile of existential despair now and then, say, by swiping a bag of jelly beans from Nora’s car, complaining they’re stale, and then realizing (courtesy of Jill) that they’re stale because the jelly beans were just one more memento of her vanished children that Nora can’t bear herself to throw away.

We’ve all had those days when you’re sitting across from an employer-mandated visit to the shrink, staring at a blow-up penguin used to comfort abused children, and all you want is carbs! Delicious, toasty, sesame-studded carbs. And then your boss gets on your case because you let your frustrations out on some stray dogs that probably had rabies anyway as even you secretly question your sanity — and then the conveyer toaster eats your bagel! Honestly, you could put any scenario in front of the phrase “the conveyor toaster eats your bagel” and it would suck equally. But where the case of the departed bagel gets singularly depression-inducing is when Kevin talks to his institutionalized father, whose bizarre rants suddenly make a discomfiting sense, such that Kevin speeds back to the office after dark, disassembles the toaster, and searches frantically, desperately, feverishly for his bagel because maybe it’s a sign … And then he finds the charred bagel stuck in the toaster after all.

What’s the most depressing thing about ditching your fiancé for trainee status at the local chain-smoking cult? Is it being asked to randomly chop down a tree without being at least fed the most threadbare cover story about how it’s symbolic of your old life? Or finding out that the hunky cop who left you his card in case you had second thoughts — that his ex-wife is your den mother? Or is it having to get nicotine stains out of all the whites those guys wear? No, as I think Meg Abbott will agree, it’s the shitty pancake breakfasts. 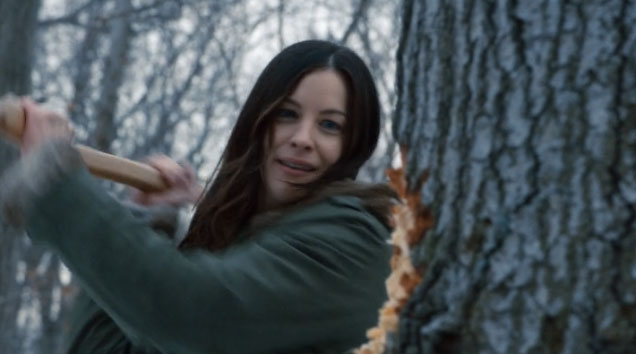 We all hate cruelty to animals. And nothing would get your goat more than watching some bald jerk in a pickup truck randomly shoot a lost dog. Unless, of course, like Kevin, you cart that dead dog to its owner and she shows less empathy for her pet’s corpse than a meter maid on street-sweeping day. But if you really want to feel the bitter sting of life, wait until you’ve been told to fuck off via Sharpie by the leader of your ex-wife’s cult after drunkenly storming their compound, then run across a roaming pack of abandoned dogs devouring a noble stag whose appearance you took as a heaven-sent sign of something — and then that bald asshole shows up and suddenly his target-practice hobbies make a lot more sense.

As the series goes on, Kevin just keeps racking up winning moments: yelling at his daughter for stealing a baby Jesus; having to purchase a replacement baby Jesus; getting pranked by the Guilty Remnant when all he wanted to do was arrest them arbitrarily like so many hummus-stained Occupy protesters. But his finest moment might be getting handed divorce papers while his wife’s cult-intern reads a long-winded rationalization and his wife stares at him in unyielding silence. Nope, nothing says the holidays like furiously screaming at your wife to verbalize words when requesting a divorce just as your baby Jesus–nabbing teenage daughter steps into the room to hand her absentee Mom a present from under the half-decorated Christmas tree.

DESPAIR RANKING: Two packs of sad cigarettes and some eggnog.

Poor Father Matt. He only wants two things in life: (1) to save the Episcopal Church his parents left him, and (2) a new toner cartridge so he can continue his community newsletter exposing the myriad sins of the dear departed. Fortunately, Staples’s instant reorder makes no. 2 easy. But saving that church — well, that requires visiting your bereaved sister Nora to beg her for some of that sweet compensation scratch she got when her entire family vanished into thin air. Unfortunately, it seems Father Matt didn’t share his toys with sis as a child. Thus, Nora says she’ll give him the money only if he promises to abandon his beloved flyer hobby and the whole pointless episode devolves into scorched-earth family warfare as Father Matt reveals to Nora that her husband was having an affair.

Of course, family trauma almost feels like a sidenote to what happens next for Father Matt. So, say you suddenly remember you have a magic jar slush fund buried in the Garveys’ backyard. And you manage to octuple said fund through three fortuitous, pigeon-inspired spins of the roulette wheel — and subsequently fight off a parking lot punk who tries to rob you using nothing more than a bad attitude. You or I might drive straight to the church-foreclosing bank to drop off that cash, even if it means speeding past a hate crime or two on route. Not Father Matt. Being a man of principle — or maybe just a sucker for a head trauma case, since that’s what left his wife in a coma — Father Matt has to stop for two random Guilty Remnant acolytes literally stoned by a passing car only to find himself right in the path of the thugs’ follow-up rock. And still, the good reverend is undeterred. He wrestles himself out of a Lynchian coma, runs back to his car to find the cash still there, and makes it to the bank just at closing time — only to learn that the head wound actually cost him three days and he’s not only way too late, his church has been bought by the very clan of obdurate, chain-smoking mutes he’d stopped to help. 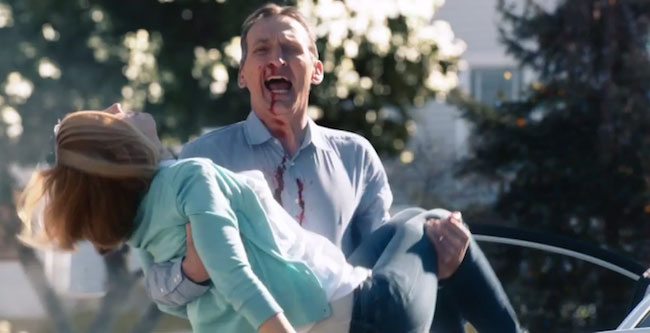 But Kevin’s stepson Tom can sure give the rest of Mapleton a run for its money when it comes to Marlboro moments. The first rule of blindly following a charismatic madman has to be that you don’t fall for any member of the underage harem whose sexual congress fuels said madman’s ability to heal pain through hugs. It’s just not a good idea. But Tom can’t help himself, which is why Holy Wayne knew he was the perfect escort for Christine, i.e. HW’s baby momma. Wayne’s choice proved wise after Tom offed a trigger-happy ATF agent to save Christine. But it’s really got to get to Tom when he fights off a pants-less loony who attacks Christine Eastern Promises–style only for the maternity nurse to assume the bruises on Christine’s belly were inflicted by Tom — and Christine doesn’t even have the decency to vouch for him ’cause she’s pissed Tom didn’t use his inside voice when he yelled at her for talking too openly about the child she’s carrying in her womb. But the real kicker: Just as Tom’s finally questioning his life choices, he gets a mockingly portentous robocall that is the bare minimum sign the universe could give him to continue down the masochistic path of protecting Wayne’s pregnant concubine and unborn child.

1. What Ever Happened to Baby Jesus? (Episode 4)

But by far the most depressing moment in these past four episodes is watching the newly church-less Father Matt smiling as he fixes the town’s vandalized manger scene with his “spare baby Jesus” — because he sure as shit doesn’t need it anymore. (We’re not even going to mention what that punk kid did to the stolen baby Jesus by the campfire. It’s just too disturbing.) 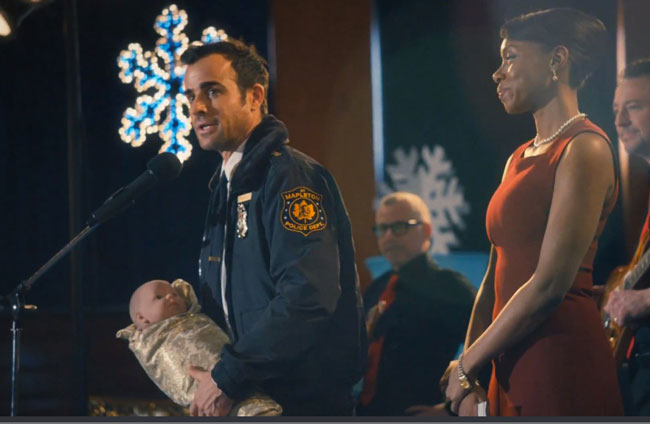 In Memoriam: James Garner of 'Maverick' and 'The Rockford Files'