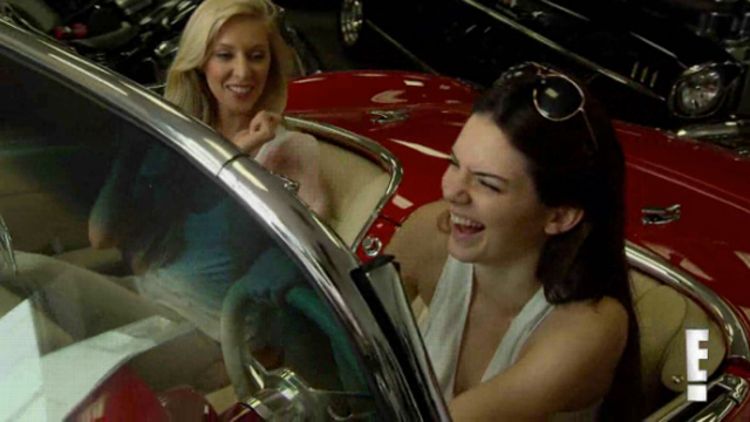 Khloe and Kim are taking pictures of Bernard Hopkins with some kind of papier-mâché unicorn horn glued to his head. With an inflection that suggests she legitimately doesn’t know the answer to the question, Khloe asks Kim, “Do you take naps?” Kim says, “I haven’t yet, but I’m really in the mood for one right now.” Sure. Getting the unicorn horn onto the dog’s head probably takes it out of you. Kim feels her baby move. Wonder-filled moving-baby music plays. “You know what I never want to see?” Khloe says. “Where, like, the foot is bulging out.” Kim starts squeezing her stomach to make the baby’s limbs poke out and Khloe leaves the room because Kim’s made it weird.

Scott’s found a pair of handcuffs. He asks Kourtney, “Remember when we used to use these bad boys?” Bruce walks in just as Scott’s proposing they put one on his [bleep] and one on her [bleep], which doesn’t even make sense. “You ever use these back in the day on ol’ Kris Jenner?” Scott asks Bruce. Bruce sighs and says, “Never the cuffs.” He’s drinking from a juice box. He’s wearing a T-shirt the exact color of a lime-yellow fire truck. Kourtney Instagrams a picture of the cuffs and Bruce can’t believe it. Why would someone share their private life with the entire world like that? He’s there to pick up his air compressor, so he does. What he does with it after that is his business. Scott tells Kourtney that dudes ask him all the time to hook them up with Kris Jenner, now that all the Kardashian daughters are off the market. Kourtney points out that she’s still technically on the market even though she has kids; Scott says, “I want to put my meat for sale, too, then.”

Later, at the Jenner house: Kourtney’s excited for Nobu tonight. Kris tells a story about a handbag. It’s such a trivial story that I forgot it almost entirely in the time it took me to hit “pause” and type this sentence. Khloe’s worried that she’s losing her memory. She can’t recall important Kardashian moments — all the times they went to San Diego as kids, Kris taking her horseback riding, stuff like that. “Yeah, right,” Khloe says to Kris, “like you took me horseback riding.” Scott says, “Bareback was her middle name in those days.” Khloe’s always been forgetful but now it’s becoming more serious, at least for the length of this episode. A brief montage of Khloe not remembering things: Khloe tries to remember if she took Comparative Religion in high school; Khloe tells Kylie about e-mailing Nicole Richie and asking her if she remembered any of their teachers from high school, and that Nicole wrote back “Are you OK?”; Khloe tries to remember her age. Honestly, I’m a little jealous of her ability to forget Kardashian facts. I’ll remember it for you wholesale, Khloe.

Nobu! Rob has his hoodie on at the table, like a 5-year-old who insists on being addressed as “Darth Maul.” Bruce is wearing some kind of shiny Moncler ski-accident. Khloe’s latex-catsuit shoot comes up in conversation. “I’m feeling a little goooood about myself and I’m feeling a little goooood about my man,” Khloe says, and Bruce uses what remains of his natural facial musculature to glower disapprovingly. He asks her if she thinks this is appropriate dinner conversation with a 17-year-old at the table. “I’m all for spicing up a relationship,” he starts to say. Kris says, “You are?”

Bruce soldiers on, pointing out that Khloe should be careful. “Especially in this family,” he says. “Photos leaking, this and that — look at the problems it’s caused.” Of course there’s an argument to be made that this family owes everything it has to the suspiciously well-managed leak of a videotape of Kim letting Brandy’s idiot brother do sex to her, but nobody makes that argument because Kris abruptly announces, “Bruce and I did a video.” Bruce tries to play it off like it was an exercise video, but no! It was a sex tape. Everyone has a great time with this information and then suddenly Kris starts spitting out mouthfuls of green stuff into her napkin. Kourtney and Khloe put wasabi in her ice cream. Bruce and Kendall go horseback riding. Kris shows up late, in a red dress and heels so high a cowboy has to help her down the hillside to the paddock. She’s come straight from a “special sock event” with Rob. She’s trying to make sure Kendall’s childhood “doesn’t — poof! — disappear right before my very eyes.” So she stands there by the railing dressed in non-horseback-riding-appropriate clothes and being weird and passive-aggressive and then a cowboy helps her back up the hill to her Range Rover. Brandon and Leah’s ride is up there, too. It’s a white pickup, because of course it is. Kendall wants a pickup, too, and Kris says no.

Khloe, Kim, and Kourtney go to Kim’s chiropractor. Kim says Kourtney has to get her back cracked. Kim says, “It’ll change your life.” Kourtney gets her back cracked. Kourtney gets her neck cracked. Kim says to Khloe, “Maybe he could do something to help your memory problems.” Khloe tells a story about how she was in a car accident in 2001, when she was 16. She suffered a heavy concussion and still doesn’t remember anything about the ride to the hospital. The chiropractor says trauma like that can affect your memory. OR MAYBE THIS ENTIRE SHOW HAS BEEN A DREAM. Kourtney and Khloe raid Kris’s photo album library to help jog Khloe’s memory. They’re looking at pictures of Ninja Turtle Christmas when Kris walks in. She’s wearing a George Condo x Kanye West sweatshirt and holding a big glass of white wine. Khloe tells the confession-cam that losing her memory is “irritating and frustrating and kinda sad.” Impressionistic montage follows, flashes punctuated by blackouts. Khloe dancing with Mason on the hotel balcony. Bruce walking her down the aisle. Attack ships on fire off the shoulder of Orion. Baby Penelope. Kourtney says, “Oh my god — Rob had the biggest balls.” She hands Khloe a Polaroid. Khloe gasps and says, “Is that normal?”

Scott won’t let go of this sex tape thing. Bruce, he says, “Could probably tell you he thinks it’s disgusting that Kim had a sex tape, but it would be OK if he had one.” He and Kourtney and Rob go to the Jenner house to search for the tape. “I wouldn’t be surprised if he’s had sex with your mom with the medal on,” Scott says. They dig through the bedroom but can’t find anything. Scott suggests looking in the “kinky drawer.” Rob says, “Nah, she doesn’t have one of those anymore,” maybe a little too authoritatively. Kris comes home and catches them beginning to search the downstairs closet and everyone plays it off by looking really guilty and walking out of the room. Later, back at their house, Kourtney suggests that they could “turn ourselves into Kris and Bruce” and re-create the sex tape, an idea Scott’s immediately into because it’s stupid. Khloe Googles Alzheimer’s. She’s got all the symptoms. Malika says, “Maybe you could go see, like, a …” and then it takes her 48 seconds to think of the word “specialist.” Maybe everyone has Alzheimer’s. Maybe Ryan Seacrest is made of lead.

Meanwhile, back at the Jenner house, Kourtney tries to ask Kendall and Kylie to go on some Dash-related errand with her. Kylie interrupts to say, “I really want you to dye your hair black — it’s more exotic” and that Kendall can’t go because Brandon’s taking her to look at a pickup truck. Kourtney and Kris give Kendall a hard time about the truck. Kourtney asks her what she’s going to put in the back. Kendall answers “Boogie boards? Surfboards?” and Kris says, “You’re not Gidget.” Scott and Kourtney prepare to Swede their Bruce/Kris sex tape. They’ve brought in a hairstylist named Clyde, who looks exactly like Johnny Depp in Secret Window and fixes them up with scarily accurate period Bruce/Kris wigs. Kourtney is wearing an actual circa-1994 Kris Jenner nightgown. “Do you guys think other people do stuff like this?” she asks. They film. Khloe acts as cinematographer, an old VHS camcorder on her shoulder. Scott does a Bruce voice and mimes taking Kourtney/Kris from behind. “When I started having sex in the ’70s,” he says, as Bruce, “there was a lot of this [thrusting] and a lot of this [different thrusting].” Kourtney tells everyone present that this is “literally how [Scott] has sex, by the way,” and Scott is shocked to hear this and says he’ll never have sex again. (Later, they screen the tape for Bruce and he admits that he and Kris did have “their wild days,” and that he should probably be easier on the kids when it comes to dirty talk. “In a 10-year period,” Bruce says, “I had six children with three different women. Oops. I guess I’m not one to talk.”)

Kendall is late for lunch with Kris because she was paddleboarding with Brody. When you make plans, Kris admonishes her, “you stick with those plans, unless something terrible happens.” But what if you’re life-threateningly unchill and the only cure is an emergency paddleboarding sesh? WHAT THEN? Kendall says “we” were paddleboarding; Kris demands to know who “we” is and Kendall admits she was with Brody. Wrong answer, because of course this isn’t really about Kendall not showing up to some dumb lunch; it’s about her clearly preferring to spend time with the Jenners over the Kardashians and Kris feeling threatened by that fact.

Khloe’s hypnotherapist’s office is in a building on a corner in Franklin Hills that I literally drive by every day, never once imagining that Khloe Kardashian might be inside, getting hypnotized. The world is so much more amazing than it looks. Khloe’s nervous about not having control of her body. It’s possible her only frame of reference for hypnosis is jokes about people being made to believe that they’re chickens. The hypnotherapist has a soothing but authoritative Gwen Ifill quality. The hypnotist takes Khloe down a flight of mind-steps, into a small clearing. There’s a movie screen in the clearing. Khloe sees her 4-year-old self, and thanks to the magic of archival footage, so do we. Little Khloe’s in a spangly baseball cap, laughing by a pool.

Then she’s older, confused, wearing Adidas warm-up pants. Images strobe. The hypnotherapist asks, “What happened at 13, Khloe?” Khloe remembers nightmares. Not being able to see her father for a while. Flash: Robert Kardashian and Kris and OJ and Nicole Brown Simpson smiling at dinner. “He was on OJ’s side and my mom was on Nicole’s side,” Khloe remembers. OJ, she says, “was like our Uncle OJ.” The hypnotherapist swallows hard and looks uncomfortable. Khloe says that she was cold to her father after that, and that he died suddenly, and that after that happened, she chose to distance herself from her family for a long time, because being with them reminded her of her father. The hypnotherapist tells Khloe that the moments she’s forgotten are moments when she wasn’t present, and that she can remember them if she wants to. She snaps her fingers. Wake up, Khloe.