The Inside Llewyn Davis Soundtrack Could Never Be As Big As O Brother Where Art Thou?, But It Will Try 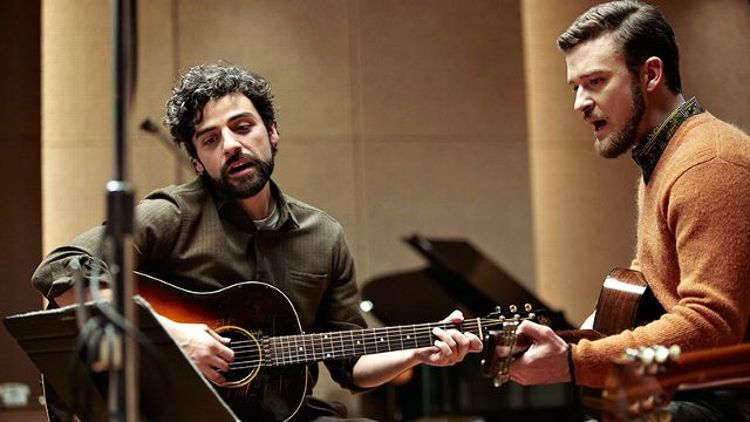 Normally, it would be awkward to write about a movie soundtrack before seeing the movie. This is especially true (normally) for Coen brothers movies, which have a reputation for taking well-known songs and reinvigorating them with striking juxtapositions and indelible seared-into-memory visuals. Think of the Four Tops’ “It’s the Same Old Song” acting as a prelude for murder in Blood Simple. Or Kenny Rogers and the First Edition’s “Just Dropped In (To See What Condition My Condition Was In)” scoring Jeff Lebowski’s bowling-themed sex fantasies in The Big Lebowski. Or Jefferson Airplane’s “Somebody to Love” providing a skeleton key unlocking repressed suburban demons in A Serious Man. Not only do these songs inform their movies, but the movies also changed the meaning of each song. You see them as much as hear them now.

Then there’s O Brother, Where Art Thou? As a film, it’s (arguably) second-tier Coens, if only because the first tier is awfully crowded. As a soundtrack, however, it’s a stand-alone album that affected pop culture as much as any Coen brothers film. It went platinum eight times, it won the Grammy for Album of the Year, it won the CMA for Album of the Year, and it spun off its own documentary, 2000’s Down From the Mountain. Now, O Brother has spawned a kind of spiritual sequel with Inside Llewyn Davis, the soundtrack to which was released this week. (The film comes out December 6.)

While the story lines of each movie have nothing to do with each other, as soundtracks, O Brother and Inside Llewyn Davis are linked by a shared musical lineage and a common producer, the estimable Americana curator T Bone Burnett. A film about Greenwich Village folkies in the early ’60s, Inside Llewyn Davis is an homage to music makers who were inspired by the depression-era music makers to whom O Brother paid homage. The bulk of the songs on the Inside Llewyn Davis soundtrack are austere English and Irish folk ballads that were fetishized by authenticity-obsessed New York musicians for predating the commercial crassness of the nascent pop-rock industry. Many of these musicians would eventually use these same songs as templates for engaging in that industry as the early ’60s officially became the ’60s.

These pilgrims venturing from the prissy purity of the cloistered folk scene into the debauched (but profitable) terrain of big-time pop music are the precursors of Marcus Mumford of Mumford & Sons, one of the stars of Inside Llewyn Davis and its soundtrack. Mumford himself lives in the penumbra of O Brother — he has credited the soundtrack with introducing him to old-timey music and inadvertently launching the “Hey!” Folk boom. (Thereby proving, once again, that Coen brothers films start as art and end up as bro culture.)

Incredibly, Mumford isn’t the biggest pop star on the Inside Llewyn Davis soundtrack. The biggest pop star in the entire world, Justin Timberlake, appears in the film (with an Amish farmer’s beard) as a member of a Peter, Paul and Mary–like group. On the soundtrack, Timberlake distinguishes himself with an original novelty song he co-wrote, the goofily mannered “Please Mr. Kennedy,” and a prim and proper rendition of “Five Hundred Miles,” which was popularized by groups like the Kingston Trio and the emblematic Peter, Paul and Mary. Surely the snootiest folklorists of the Kennedy era would’ve scoffed at a mainstream star like Timberlake affecting their hip posturing 50 years later. (Ditto that for Mumford.) But on the record it plays like a sardonic commentary on the hypocrisy of underground scenes that define themselves by their proximity from consumerist culture — pure Coens, in other words. In the end, it’s all mixed together with the same dirt in the ground.

Inside Llewyn Davis might have a couple of big stars playing supporting roles on its soundtrack, but the star of the album is unquestionably Guatamalan Cuban American actor-musician–walking hyphenate Oscar Isaac, whose role as Llewyn Davis requires him to sing on nearly half the soundtrack’s tunes. For an actor — you might remember him as Carey Mulligan’s husband in Drive — he’s a pretty fantastic singer, capably delivering sullen dirges like “Hang Me Oh Hang Me” and “The Death of Queen Jane” in a tenor so warm and inviting it strains the credibility of the narrative. Llewyn Davis is supposed to be an uncompromising artist eking out a living in half-empty coffeehouses. But Isaac, with his smoldering vocal presence and hunky good looks, sounds like he could go on tour with the Lumineers tomorrow and have hit songs.

This is surely a great thing when it comes to establishing the Inside Llewyn Davis soundtrack as a cottage industry. (It continues next month when a concert film premieres on Showtime. After that, perhaps Isaac really will go on tour.) But I can’t help but compare Isaac with Dave Van Ronk, the broad-shouldered, craggy-voiced raconteur who is Llewyn Davis’s primary real-life inspiration. A legend of the Greenwich Village scene who died in 2002, Van Ronk was the unofffical “mayor of MacDougal Street,” a mascot of sorts who symbolized the idealized earthiness that many of his more famous contemporaries were forced to shed as they were embraced by international audiences. Van Ronk was not a pretty man, physically or musically — he had a body like a bear and wore an unkempt beard, and he sang in an impassioned bark that had a noticeable residue of phlegm as he aged. As a guitarist, Van Ronk’s playing was rooted in the blues, as it was for his friend and protégé, Bob Dylan. (Any semblance of bluesy grit is conspicuously absent on Inside Llewyn Davis.) Van Ronk doesn’t appear on the soundtrack until the final song, “Green, Green Rocky Road,” which is also performed by Isaac earlier in the record. Isaac’s version is totally fine as a wistful invocation of the past; Van Ronk’s version, however, is eternal. His voice sounds 10,000 years old.

Will the Inside Llewyn Davis soundtrack be as popular as O Brother? It’s hard to imagine any album in 2013 being as popular as O Brother. But I don’t doubt it will have legs as its own entity no matter how well the movie does. As is the case with every project that involves Burnett (even the enjoyably trashy ABC soap Nashville, which he recently departed after acting as musical supervisor during the first season), Inside Llewyn Davis benefits from great taste in material (bonus points for including Tom Paxton’s sad-bastard standby “The Last Thing on My Mind”) and impeccable presentation. This is the year’s best album for sipping coffee on a Sunday morning; it will undoubtedly be the go-to Christmas gift for dads who once bought albums on a weekly basis, just as O Brother was. Inside Llewyn Davis feels like the inevitable conclusion to what its predecessor started — the pop-friendly capper to a rootsy revolution.

Filed Under: Inside Llewyn Davis

Do You Like Prince Movies? Podcast: R.E.M., Thor: The Dark World, and the End of Blockbuster