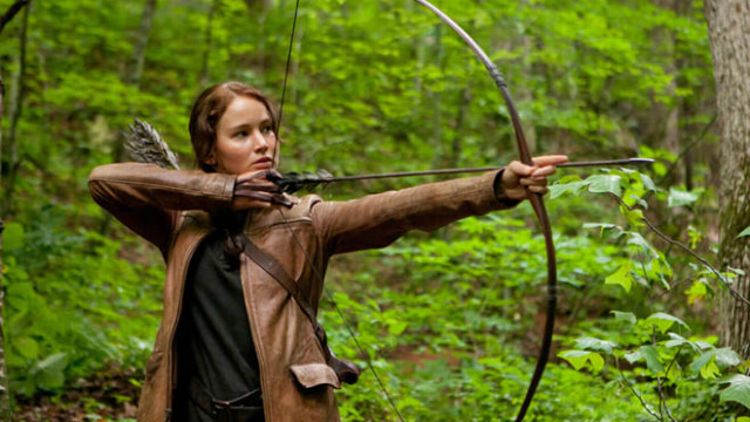 Exactly how good is Katniss at killing people? Certainly, that is in no way the point of The Hunger Games. As its star Jennifer Lawrence explained to EW, “These kids are only killing each other because if they don’t, they’ll die. It’s needless, pointless, unjustified violence. So there’s nothing cool about her.” But, come on — exactly how good is Katniss at killing people? Our heroine goes about her work in the deathly arena as a long-shot dark horse, and her efforts are a tribute to will and perseverance. But is it really that simple? Unfortunately, a death-by-death analysis of Katniss in the arena reveals some hard truths about Everdeen’s skill set. [Note: This post is FULL OF SPOILERS. If you weren’t one of the people who chipped in to the $155 $152.2 million opening weekend, you probably want to move on.]

The Cornucopia Bloodbath
As soon as the trumpets blast, announcing the start of the Games, the central bloodbath at the Cornucopia prophesied by Katniss’s mentor, Haymitch, goes down. The thing is, Haymitch told Katniss to jet out of the way, to turn and run for higher ground. That’s what her pal Peeta does, and he makes it out nick-free. But, ever impetuous, Katniss heads into the fray for supplies anyway. As Cato, one of the powerful Career Tributes, slays children with swords and various other sharp tools, Katniss dodges in to snatch a backpack of goods. And it is there that, in a bit of foreshadowing, Clove (another Career), nearly takes Katniss out with a flying dagger. Right off the bat Katniss doesn’t listen to strategy, and almost pays for it with her life.

The Fireballs
After flexing her impressive survival skills — discovering water, snaring a delicious-looking arena rat for dinner — Katniss makes herself at home, high on a tree branch. The Gamemakers chase her out of her safe haven with screeching fireballs, and she proves quite fleet on her feet, dodging infernos and falling timber with agility. At this point she’s spotted by the Careers, and scurries up a high tree to escape. Cato and his pals try for like three minutes to bring her down, but are swayed by Peeta, the agent provocateur in their midst, who suggests waiting Katniss out rather than taking her out immediately. Are you trying to tell me that Clove, whose knife throwing had already been demonstrated to be circus-level good, couldn’t have caught Katniss between the eyes? It’s the first of many elegant Peeta assists that lead directly to easy buckets for Katniss.

The Tracker Jackers
Now it’s time for Rue to come up big. The diminutive District 11 tribute wakes up Katniss while the Careers are still napping below, and points out the nearby snarling hive of Tracker Jackers (mutated wasps whose venom leads to hallucinations or death, of course). Katniss dutifully follows Rue’s game plan and drops the hive, and the results are effective: The Careers scatter, and the Tracker Jackers utterly smoke a Career named Glimmer, who’s left all swollen and purple and dead, her bow there for the taking. But Katniss catches a bite, too, and starts hallucinating; thankfully, Peeta again provides teammate support, screeching at her to run far, far away. The next few days find her comatose and being cared for by Rue, who’s created a leaf-based ointment to treat wounds. There Katniss was, asleep for days, at the mercy of young Rue. But her life was spared by the wily youngster. Another hugely lucky break.

Rue Goes Down
Next, Katniss and Rue formulate a plan: They’ll set fires to distract the Careers, and then they’ll destroy all their supplies. Rue pulls off her end flawlessly, and the Careers jet off toward the smoke. But Katniss, in the first display of her famed bow-work, falters. Attempting to shoot down a bag of oranges that will then trigger the booby trap mines ringing the pile of supplies, she misses her target, and has to fire again. Meanwhile, Rue is off being trapped in a net. Katniss goes to free her and Marvel, a Career, shows up. Katniss manages to drop him with an arrow — but it’s too late. His spear nails Rue in the chest. The bow work is strong, but not quite strong enough.

The Medicine Run
Fast forward a bit, and now Katniss and Peeta are back together, in a cave by the river, and scheming how to make it out of the arena alive together (the rules had been changed to allow two victors). Thanks to Rue’s advance scout work, Katniss knows where Peeta is hiding. But he’s hurt, and needs medicine for a leg wound. Katniss heads back to the Cornucopia, where said medicine is set up as bait, and runs into Clove, the knife thrower. Katniss’s bow work is shaky once more and Clove gets the drop on her; she pins her down on the ground, and is all set to plunge a dagger deep into her side. But then Thresh, Rue’s fellow District 11 tribute, shows up, and promptly slams Clove into the side of the Cornucopia as revenge for the Careers having killed Rue. “Just this once, 12,” he tells Katniss. And yet again, District 11 saves Katniss’s life.

The Finale
Everything comes to a head on top of the Cornucopia, with Cato wrapping Peeta in a half nelson as the beast-dogs below clamor for human flesh. Shoot me and we both go down, Cato helpfully explains to Katniss, and she’s paralyzed by the decision. Peeta, ever the strategist, points out an exit — shoot Cato in the hand, he insinuates. And like an orderly point guard carrying out the coach’s brilliant play call, Katniss does as she’s told. The strike startles Cato, and Peeta whirls him down to his death-by-beast-dog. And then comes Katniss’s greatest moment. With Cato dead, Peeta and Katniss should be declared winners. But the villainous disembodied voice announces that, haha, just kidding, there can be only one winner. Peeta, ever the team player, is ready to fall on his sword. Katniss takes out her batch of poisonous berries, and feints like they’re both going to swallow some and be out. It’s a bold, reckless move — and it works. The Games are ended before the two can crunch on the berries. Katniss launched a full-court buzzer-beating heave, and she swished it. All of the miscues and lucky breaks she’d accrued? Swept under the rug in light of her glorious game-winner.

Bill Maher, Fred Armisen, and the Menace of the One-Man Show