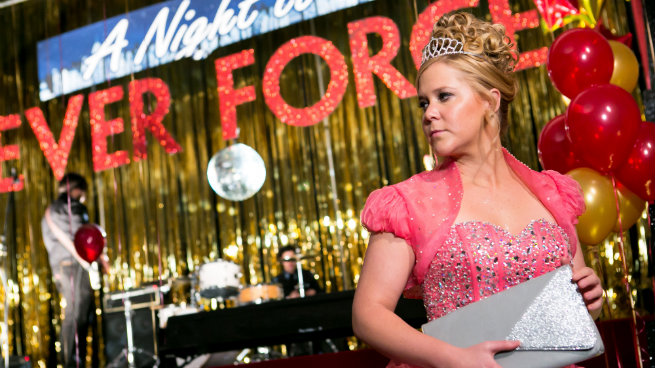 Halfway through its second season, Inside Amy Schumer is another jewel in the Comedy Central crown; the network now counts the series, along with Kroll Show, Broad City, and Key & Peele, among its critically acclaimed buzzy cultural products. Schumer has been compared to Chappelle’s Show, blowing up gender issues with the same slingshot approach Dave Chappelle took to race. The Schumer staff has a very high comedy pedigree, with alumni from Chappelle’s (Neal Brennan, Jessi Klein, Kurt Metzger), The Sarah Silverman Program (Steven K. Tsuchida, Tig Notaro), Wonder Showzen (John Lee), The Colbert Report (Daniel Powell), Reno 911! (Kyle Dunnigan), and Kroll Show (Gabe Liedman). With so many cable comedy veterans involved, it’s not surprising Schumer quickly found its footing in the first season, immediately digging out a niche that balanced edgy sociopolitical commentary with absurdism, gross-out humor, and bawdy physical comedy. This season, Schumer has doubled down on its strengths and also reprised some of its weaknesses.

The first sketch of Schumer’s second season depicts a focus group of men being asked for their thoughts on the first season. As the interviewer goes around the table, each male subject gives an answer to the same effect, saying they’d like to see much more of Amy’s body and way less of her face. It’s a viciously effective parody of an insidious social issue: that everything still always boils down to how hot a girl is, provided you’re asking straight men.

Throughout each episode, Schumer is the bubbly anchor, her charisma carrying her through sketches in which her characters are routinely humiliated or verbally undermined. But her characters’ suffering only serves to skewer the heterosexual white guys (a.k.a. “bros”) whose acceptance she seeks. She treasures each morsel of validation, often in the form of dubiously backhanded compliments from douche-bag male suitors. She greets every sad crumb of acceptance as a gift from the heavens, a winningly clueless declaration of her worth. No matter how pathetic she is, she never thinks of herself that way. Her cockeyed optimism protects her from reality. She might just make it after all.

The semiautobiographical protagonist Schumer portrays in the bulk of the show’s sketches is a female underdog of a type seldom depicted onscreen until very recently: the slut with a heart of gold. Amy is adorable and sexy, but not in a Sports Illustrated swimsuit supermodel way. She’s a girl men would sleep with, but wouldn’t necessarily show off to their friends. Schumer’s girls realize they are playing an unwinnable game, but they can’t help but want to get as good at it as they possibly can. They are disparaged, degraded, and thrown in the Dumpster, but it only ever strengthens their resolve. When Schumer’s girls make fools of themselves, you have to laugh. The inanity of women contorting themselves to fit into the one tiny socially acceptable box they are allowed is the show’s primary object of mockery. Girls with vocal-fried Valley-girl voices and chronic up-speak aren’t derided so much as affectionately teased. It’s not their fault, Schumer suggests, that some women feel the need to announce “I’m so bad!” every time they eat something deliciously fattening. If women’s bodies and faces weren’t under such constant scrutiny and criticism from heterosexual males, maybe they wouldn’t feel the need to masochistically punish themselves for deviating from the impossible ideals set by advertising and porn.

Schumer is often knocked down, but she never tags out. With each new embarrassment, she merely dusts herself off, has a laugh at her own expense, and puts on a tiny smile instead. She’s like a clumsy romantic-comedy heroine, except the reason she keeps falling down is that someone’s always tripping her. Her sluttiness is exaggerated and then played for laughs. Her promiscuity might be a joke, but it’s not a joke on her. She’s the one collecting sexual experiences and turning them into stand-up routines. She sometimes milks clichés about desperate, commitment-hungry single women, but mostly she revels in her endless quest for the perfect D.

Amy seems poised to cross over from cult comedy star to big name soon. The show recently had its first big breakout sketch, “The Foodroom,” a spot-on parody of HBO’s The Newsroom that some speculated may have prompted Aaron Sorkin’s press conference “apology” last week. She’s attracted the support of Judd Apatow, who is directing Schumer’s self-written vehicle Trainwreck for the screen. Like other breakout female comedy stars of recent years, such as Tina Fey and Lena Dunham, Schumer has a persona that is instantly recognizable, which makes you wonder why you’ve barely ever seen it onscreen before. All three play with the issue of women having to strive so hard to be likable — to men, to one another, to the public — that it makes them veer into being completely unlikable sometimes.

Like Dunham and Fey, Schumer also has issues with race that occasionally undermine the effectiveness of her feminist platform. One of Schumer’s character’s slutty-girl tropes is that she is a white woman who regularly sleeps with minority men, but often disparages those men in a way that comes off as racist. Whether Schumer is mocking the casual racism of white women by playing an ignorant persona (à la Sarah Silverman) or just being casually racist depends on your point of view. But her stand-up is problematically laced with these kinds of observations. A first-season joke from one of her stand-up interludes that stood out for being especially shitty and offensive was Schumer commenting: “I used to date Hispanic guys, but now I prefer consensual!” Ugh. This season she did a riff about sexy Latinas that came off as extremely ignorant, and a joke about the personal hygiene of Indian men was particularly tone-deaf. The racial humor is Schumer’s least subversive quality, and directly echoes the same awful white-bro status quo that is being mocked in the focus group sketch.

Inside Amy Schumer is best when its targets deserve to have tomatoes lobbed at them. The foibles of yuppie women in New York — long boozy brunches, fancy expensive gyms, the thinly veiled competitiveness among the city’s packs of ambitious, sexually voracious women who are all trying to level up in life — it’s the same world being riffed on in Sex & the City, Broad City, and Girls, but Amy’s take has the most obvious teeth. But like its heroine, the show is optimistic. The bus that drives by with your face on it doesn’t always just splash you with mud; sometimes it also runs you over, leaves tire tracks on your face, and dumps a bucket of gasoline in your hair for good measure. The trick, according to Inside Amy Schumer, is simply to peel yourself off the ground like Wile E. Coyote and keep marching on. That sunny smile on your face might be fake at first, but eventually it starts to stick.

Difficult X-Men: A Defense of Cyclops