The Great ‘Archer’ Returns and Reboots, While ‘Chozen’ Comes Out Strong 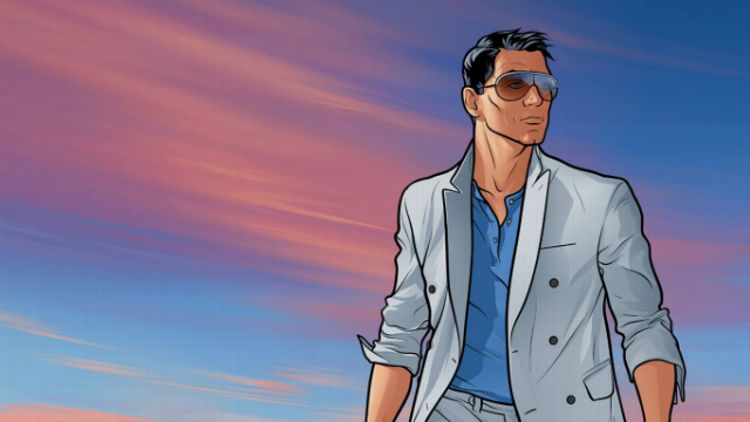 For a long time The Simpsons was the fastest show on television. A combination of highly caffeinated, Harvard-educated show-offs in the writers’ room and the complete creative freedom afforded by animation transformed what was originally intended to be a straight (if yellow) family sitcom into an ADD-explosion of satire, asides, cutaways, and jokes so in you’d need Professor Frink’s Hoax-a-Scope to locate them.

These days, nearly every beloved (if poorly rated) single-camera sitcom is a cartoon, even if flesh-and-blood actors are involved. The rhythms and possibilities of animation are everywhere: Parks and Recreation has a rogue’s gallery that rivals Springfield’s, and the gleeful 30 Rock and Arrested Development treat reality the way bungee jumpers treat bridges. The only thing that separates Community from full-on toon town is a couple of SAG cards — and even that’s not always enough. In response to such wholesale borrowing, actual cartoons had but one recourse: to get dirtier and a whole lot weirder.

Leading the charge on that score for the past four years has been Archer, FX’s martini-dry exercise in spy jinks. Created by Adult Swim veteran Adam Reed, Archer chronicles the willfully anachronistic adventures of the debonair, deeply dumb Sterling Archer (H. Jon Benjamin), an American James Bond type whose unflappable commitment to egotistical hedonism suggests a childhood in which he was shaken, never stirred. (This theory is only reinforced by the behavior of his mother, Malory, a gin-dependent ego monster voiced by Jessica Walter who also happens to be the chief of the International Secret Intelligence Service — or ISIS.) Weekly attacks from KGB agents, Cuban agents, and Burt Reynolds are interspersed with deep dives into drug- and sex-fueled strangeness: Secretary Cheryl Tunt (Judy Greer), a secret billionaire, huffs rubber cement; HR chief Pam Poovey (Amber Nash) is into tentacle porn.

I watch Archer semi-regularly — along with fellow FX bro-com The League, it’s part of a rotation of entertaining, low-impact shows I tend to fire up on Netflix after a few drinks; it’s more of a chug-watch than a binge. But, until now, I’ve never written about it. The reason being, I rarely had much to say beyond “this is funny.” (Occasionally I would find it “very, very funny.”) This is not meant to be damning with faint praise. Rather, it’s praising with faint verbiage. Some shows are so good at what they do (and what they do is so hugely specific) that it’s hard to find an entry point for a review. For four seasons, Archer ran more smoothly than the break in Sterling’s best tuxedo pants. It could easily have run for four more. But a funny thing happened, something that’s all too common among TV showrunners but all too rarely acted upon: Adam Reed got bored. And because his show is a cartoon, he could grab the eraser and start all over again.

After the status quo–exploding season premiere (airing tonight at 10 p.m. ET), Archer as we knew it is no more. For reasons I won’t spoil, ISIS is gone along with all the show’s go-go trappings of international espionage. Stripped of their mandate and their machine guns, the gang is left with nothing but their lingering resentments, their petty grievances, and each other. Oh, and a gigantic pile of cocaine. Thus, next week, Archer becomes Archer Vice as Sterling and a very pregnant Lana (Aisha Tyler) begin the unglamorous dirty work of unloading the drugs in an attempt to reclaim their lost money and power. (They’ll form a cartel because, as Malory puts it, “if Mexicans do it,” how hard can it be?)

Community received a lot of credit a few weeks ago for essentially rebooting itself at the start of its fifth season, but that was more like hitting refresh as the show got back to its core principles (and deans) with the return of creator Dan Harmon. (A similar thing happened in the third season of Friday Night Lights.) What Reed is doing with Archer is considerably more radical. He’s taken the same cast, with all their baggage and hentai holograms, and dropped them into an entirely new show like a cigarette boat splashing down into Biscayne Bay. You can sense the writers’ excitement in the new possibilities: They tear into stories about vengeful gay Marielitos and pill-pushing Yakuza like Pam into a kilo of blow. (Her preferred method of ingestion is mixing the yayo into froyo.) You can also notice it: There’s something almost touching to the meticulous detail the animators bring to the show’s version of Miami, from the swaying palm trees to the long list of batidos available for sale at a café. It’s still reliably dirty (Sterling is gentleman enough to give a lady the option of thanking him with her choice of job, blow or rim) but in the service of something much grimier and at once totally fresh. It’s also very, very funny.

Archer’s season premiere is paired with the debut of Chozen, a new cartoon animated by Reed’s Floyd County Productions and created by former Eastbound & Down writer’s assistant Grant DeKernion. (Fellow Carolinian degenerates Jody Hill and David Gordon Green are on board as producers; K f’ing P himself, Danny McBride, provides a voice.) Chozen tells the story of a family-friendly white rapper (the titular Chozen, voiced by the tremendous Bobby Moynihan) who, in the pilot, is framed by his hype man Phantasm (a gruff Method Man) for not letting him shine. After a decade in jail, during which time Phantasm has ascended to the tax bracket of a post–Vitamin Water 50 Cent (the trappings of his wealth include “MJ’s glove, a Spike Lee joint, and one of 2 Chainz’ chainz”), a hungry Chozen emerges with a chip on his shoulder and a weight off his back. Decades after The Source and other magazines would titter about the mysterious “gay rapper,” here he is, out and proud, in all his Channing Tatum–fetishizing glory. Chozen is about an outsize man with twin passions — hip-hop and casual hookups — and his uphill struggle to get his fill of both.

It’s a good hook, but any MC knows that the real work is done in the verses. And for a show with such an in-your-face conceit — and if the conceit isn’t in your face, be on the lookout for the hyper-muscled bears (in all senses) twerking our hero in a fountain while he drops science about murder and sex — Chozen is surprisingly, endearingly tender. It helps that Chozen has a crack support team around him, including his salty sister Tracy (Kathryn Hahn), whose college dorm room becomes a makeshift studio, and the Boyz to his Heavy D: Crisco (Hannibal Buress) and Ricky (Michael Peña). And the humor walks the same delicate line of shock and awe as Eastbound & Down: For every hilarious provocation (says McBride’s Jimmy, a former metal roadie who becomes Chozen’s manager in between snapping illicit pics of co-eds, “looks like you got into a fistfight in a bukkake party and the dicks won”) there’s a dash of oddly accurate whimsy (“Let me tell you what don’t matter: Spelling words right in a text. Eating sea salt or regular.”). Better is the fact that Chozen’s gayness isn’t treated as off-putting or a joke. It’s an essential part of who he is, and the in-show songs, which tackle subjects ranging from wealth and blunts to banging lax bros, are both clever and totally plausible. After all, what could be more hip-hop than spitting your truth?

Paired with the resurgent Archer, Chozen makes the case for adult cartoons as more than just an alternative to hoary sitcoms still trapped by their dependence on heavy cameras, tiny location budgets, and joke-mangling meat-puppets. Archer and Chozen don’t just do what their live-action rivals won’t. They proudly — ecstatically, insanely! — do what they can’t. And that makes all the difference.