A Tale of Two Dons: DeLillo’s ‘Forgotten Memoir’ and Novello’s Yearbook About Sheep 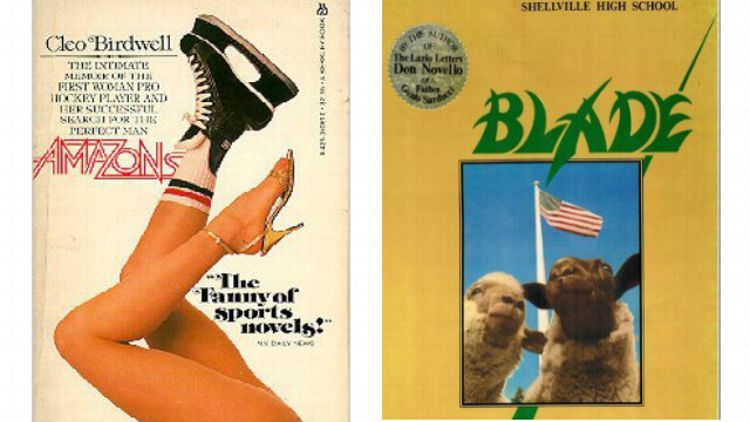 Judging by the Amazon reviews (“cleo birdwell, where are you?”; “I was surprised Cleo Birdwell used the language she did in this book”), Don DeLillo was successful in distancing himself from 1980’s Amazons: An Intimate Memoir by the First Woman Ever to Play in the National Hockey League, written under the pseudonym Cleo Birdwell. According to a report on the Weeklings, “Whether from embarrassment, personal reasons, a game he’s playing with his readers, or other reasons I can’t fathom, Delillo doesn’t want his name attached to the book and has never officially acknowledged writing it. He asked Viking to expunge the book from White Noise’s bibliography and won’t grant permission for the novel’s reprinting.”

That’s strange, because judging by the Weeklings account, the book sounds like a ripping yarn (and a graphic meditation on penises). It predates White Noise by five years and includes one of the well-known novel’s best characters, Murray Jay Siskind, as “a New York sportswriter who carries his 800-page tome wherever he goes, an exposé of the Mob’s entrenchment within the snowmobile industry.” DeLillo originally planned to publish Amazons under his own name with Knopf, and when they refused, he had to shop it elsewhere under Birdwell’s name. (It was published by Holt, Rinehart and Winston.)

A model posed as Birdwell for the book jacket photo, a gloved hand gripping a hockey stick, her long blonde hair fanning out in the wind; she would also appear to sign galleys at the American Booksellers Association conference in her Rangers jersey. While it’s not too difficult to sleuth out the real author of Amazons (DeLillo collaborated with his former coworker, Sue Buck, on the book), for whatever reason, he has divorced himself from his seventh novel. Maybe he was embarrassed by so much phallic prose (“He never got over his first erection. He just loved flaunting himself. He was always playing with it”). DeLillo worked as a copywriter for advertising firm Ogilvy & Mather — maybe stripping his résumé of Amazons is a kind of brand management. I had no idea it existed until I saw Salon’s repost of the Weeklings article, which had originally run on January 7.

That was strange, because on January 7, I ordered a book from Amazon by another Don — Don Novello, otherwise known as Father Guido Sarducci from vintage Saturday Night Live, and the author of The Lazlo Letters (as well as two follow-ups, Citizen Lazlo! and From Bush to Bush: The Lazlo Toth Letters). I wasn’t buying The Lazlo Letters, Novello’s published correspondence between his alter ego Lazlo Toth and all the luminaries he trolled (including Richard Nixon and Lester Maddox); I was purchasing a yearbook about sheep. The Blade: Shellville High School Yearbook lived in my parent’s powder room throughout my childhood, where guests frequently brought it out with them to read at the kitchen table. Eventually, one of them stole it, and it had been 10 years since I’d stared at the underclassmen and faculty going about their business (a class trip to “Two Tree State Park,” the prom). My parents know Novello, but he was always just an enigma to me; I never met him, and only ever knew him as the author of a series of very strange books that lived in our bathrooms. I don’t think I understood the humor of The Blade until long after I had memorized the furry faces of the Taggart twins and senior heartthrob Michael Visnick, whose yearbook quotation is from “Born to Run” and who appears in candid photos bobbing for king crab at Hippo’s seafood restaurant.

Besides the absence of humans, The Blade is a faithful and serious yearbook. Sure, the school play was a hybrid of Waiting for Godot and A Streetcar Named Desire. And, fine, there’s the deadly tornado/UFO that claims the life of valedictorian Betty Fulton. Other than those pesky details, however, The Blade rests comfortably in the deep sofa of its single joke and doesn’t work too hard to crack any others.

DeLillo, by contrast, has described himself as “a serious writer” and, in an interview with The Paris Review, he makes it clear exactly what he means: manual typewriters, taking “earnest measures to secure his solitude and then find[ing] endless ways to squander it,” and looking at photographs of Borges (“sent to me by the Irish writer Colm Tóín”). Wiping Amazons, which Bookforum called a “laugh-so-hard-you-reach-for-your-asthma-inhaler hoot,” from his record makes a lot of sense when you try to reconcile it with the image of the author, serious and gray-haired, tapping it out while he meditates on pictures of philosophical Argentinians.

It’s difficult to say which comes first: success or self-seriousness. That’s not to say that DeLillo isn’t funny, or that passages in White Noise won’t make you laugh out loud (but it’s definitely not a “hoot”). The ongoing battle between Jennifer Weiner and Jonathan Franzen is, on one level, about gender dynamics in the publishing industry, but it’s also an argument about literary versus commercial fiction. Weiner, a best-selling author of novels often dismissed as “chick lit,” coined the term “Franzenfreude” in 2010 and, after Franzen called her out on her social media promotion tactics, pointed out that he’s in a uniquely privileged position to critique her for doing so. I’m not a fan of Weiner’s books, but part of what makes Franzen Franzen is his cranky humorlessness as he assesses the world. Being “retro” is “hopeless,” but ebooks will be the downfall of humankind; he hates the Internet, adolescents, and Oprah’s book club, that lady-reader magnet, with equal fervor. He is ashamed to be a bird-watcher, maybe because there’s something funny about a literary man crouching with binoculars, hoping to spot a blue-footed booby.

Integrating silliness into a serious career is a scary prospect. When we revisit DeLillo’s Amazons now, it’s tempting to deep-read it, and perhaps that’s exactly what the author wants to avoid. But knowing that DeLillo authored a book about a dick-contemplating female hockey player (emphasis on the “player”) just makes him seem more textured and interesting as an author and a person — even if Amazons doesn’t feature sheep with turntables.

The Great 'Archer' Returns and Reboots, While 'Chozen' Comes Out Strong

'The Legend of Hercules,' by the Numbers