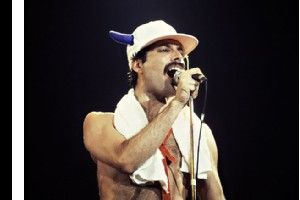 We were lied to! Just a few weeks back, Queen guitarist Brian May told Billboard he’d never perform with a hologram of Freddie Mercury, saying “It just doesn’t sit too well with me. I don’t want to appear with a hologram of my dear friend. It’s the real one or no hologram for me … Were somebody (else) to use a hologram of Freddie, I would have no objection.” Now it’s clear that May was just mincing his words. Yes, he won’t perform with a hologram of Freddie, but “somebody else” certainly will: At the upcoming 10th anniversary of West End musical We Will Rock You, a digitized Mercury will appear. Calling it an “optical illusion of sorts” and not technically a hologram, May promises that “People will come out saying, ‘Did we actually see Freddie?'” Also, for the record, this was Queen’s idea way before Coachella: “It’s a little unfortunate they did that thing with Tupac as we’ve been trying to make Freddie appear on the stage for quite a while … [That technique]” — remember, Hologram Tupac is not really a hologram either — “is something we’ve looked at ourselves but I think probably for a show that runs eight shows a week it’s not really quite practical.”

There you have it: another soul awoken from its slumber for your pleasure. And the Brave New World of live music entertainment packaging creeps ever closer.

Filed Under: Queen, Raising the Dead

Game of Thrones Season 2, Episode 7: 'A Man Without Honor'