Black Toenails and the Atmospheric King 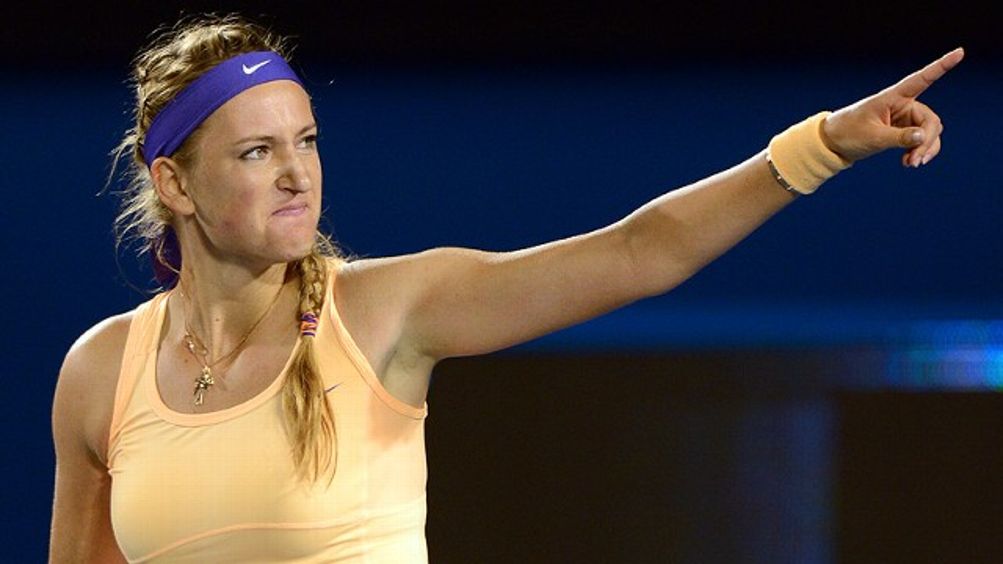 The caricature of Li Na heading into the Australian Open was that she was charming and funny, free-spirited (or, at least, tattooed), the best on-court interview — but that she was also a mess. Couldn’t close it out. She was a fantastic “one-set player,” but if you could hang with her for long enough, if you could weather her hot streaks, you could beat her. Her forehand would break down. She would become angry with the crowd, the ball kids, her box, herself. She would scream. She would pout. She would be close to winning, and then she would lose. Nearly 31 years old, she came into the Australian Open as the sixth seed, but few expected her to make it to the final. She had won a slam, the 2011 French Open, but was known as a head case, not a champion. Her loss in the 2011 Australian Open in three sets was almost more remarkable than her win at Roland Garros in two. Coming into Saturday’s match, Li Na was the only woman in the past 25 major finals to win the first set and then lose the match.

The caricature of Victoria Azarenka heading into the Australian Open was that she was a machine who, when her agent and PR people pressured her, put on a smile for reporters and sponsors and did her best impression of a human being. She cooked a fish on CNN. She discussed her musical tastes. She insisted to the press that she was “definitely not intense in real life.” Her insistence was usually greeted with nervous laughter. She was definitely intense on the court. It was almost inhuman, what she could do on the court: shut out the world. Before a match, she would pull up her hood, put on her music, and prepare herself to care about only one thing: a tennis ball. She walked around the court with two predominant expressions, the blank face and the bitch face.

Over the past couple of weeks, heading into Saturday’s final, the conventional wisdom about these two players had slightly changed. Li Na had momentum. Her coaching change had paid off. She had fired her husband as her coach and begun to work with Carlos Rodriguez, who improved her fitness, added more topspin to her forehand, and taught her to rein in her emotions. Soon after his hiring, he told the New York Times, “My job is also to help her have this” — pointing to his head — “control this” — pointing to his heart. When the heart controlled the head, he added, “this is disaster.” It seemed to work. Li dominated the dominatrix Maria Sharapova and thoroughly outplayed the fourth seed, Aga Radwanska, to everyone’s surprise — except maybe Li’s own (and that was the craziest part). She won sets without collapsing. She shanked a serve into the crowd without losing her cool. She stopped being so erratic. Azarenka, on the other hand, suddenly couldn’t focus. Against Jamie Hampton, her movements were sluggish. Against Sloane Stephens, she couldn’t put the match away, blowing five straight match points and then panicking. She called for the trainer. Her rib was “locked.” The press and social media jumped on her. It became the story of the tournament. A few people argued that she wasn’t the first to leave the court at a tense moment, and that she had actually once passed out on the court. Most were less charitable. Either she’d practiced a nasty bit of gamesmanship, or she was such an automaton that she considered nervousness a medical condition.

There is something kind of ridiculous about the matchup of the quirky comedienne and the methodical fighter. It’s a little gendered, for starters, à la Tsonga: the emotionally unstable one who’d finally learned to calm down versus the competitive bully. Lest you forgot, perhaps distracted by the tennis being played, ESPN was there to remind you: Li has a husband who snores, and Vika has a Redfoo who raps, which is not quite the same thing. 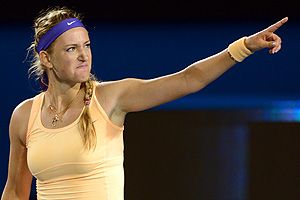 What’s interesting to me, though, isn’t that the stereotyping is a bit lazy. What’s interesting is that the players themselves encourage it. Li Na is the one who goes on charm offensives with a husband-and-wife routine, even appearing with him in commercials in China. Vika is the one who sounds most comfortable when talking about how much she likes to be out there by herself, competing. She’s the one who, at her post-semifinal press conference, following the infamous timeout debacle, wore a Nike T-shirt that said “Kiss My Fast.” She’s not afraid to let you know: She likes being no. 1, all alone.

Azarenka and Li inhabit their personae. Partly, I’m sure, because those personae are connected to who they are when the cameras aren’t on. And partly, I’m sure, because having a persona is part of the price that public people have to pay. But I also wonder sometimes if the personae help them deal not only with the press but with themselves. It has to be hard, after all, for Li to be aware of her status in China as a hero, and within the WTA as the woman who might bring the game to a billion people. Her French Open final was watched by an estimated 116 million people in China, and similar numbers were expected for Saturday. There were so many Chinese flags in the crowd at the final, she quipped, that it “looks like the China Open.” After winning the French, she suddenly became the second-highest paid female athlete in the world. So the pressure is real, and it’s magnified on a tennis court. No one can help her there. During a match at a major, no one can coach her. No one can touch her, unless she suffers a terrible fall. She doesn’t deal with the pressure by holding it in. Li constantly watches her coach’s box. She yells and cracks jokes. She smiles and plays to the crowd. She puts on an act — a lot more deliberately, however more humorously, than Vika does. Li won’t let you forget about that husband.

For Vika, it’s different. Azarenka almost never looks lonely out there. She looks rattled sometimes, but not because suddenly she’s aware of playing inside an arena in front of an audience that mocks her manner and her noise. When she looks nervous, it doesn’t seem to be because she’s afraid of the person on the other side of the court (unless, significantly, that person is Serena). You can’t know what’s in another person’s head, of course, but while other players tend to lose their backhands because they’re nervous, she tends to become nervous because she loses her backhand. When that happens, she’ll take some energetic practice swings — and then often produce some of her best tennis. On Saturday, she played a disastrous first set, sluggish and tight, with no forehand winners until after she’d faced her first set point. But what a forehand that was! She hit it running and lunging, flicking a winner sharply cross-court. Until the U.S. Open final against Serena, she had not lost a three-set match in 2012.

She has been alone for so long. She had to become comfortable just to survive. “You know, when I came first on the tour I kind of was lost a little bit,” she said on Saturday night. “I didn’t know how to open up my personality. It’s very difficult when you’re alone. I was independent since I was, you know, 10 years old. I went first time to the states when I was 10 years old.” There’s nothing particularly unique or special about this part of her story, of course. Countless people learn to take care of themselves. The difference is that she managed to turn that fortitude into a quality that helped her become the best in the world at what she does.

It’s telling that players are always talking about their “team.” They’re not just being nice: They know that the tension between being alone on the court and depending on the support of others is part of what makes tennis such a compelling game. Li Na broke down in tears after Saturday’s match when asked about her husband in an interview for Chinese TV. Azarenka, after winning, went to her box and reached up to grab hands.

First, though, Vika sat on her bench and sobbed. Those were not just a victor’s tears of joy. She had had a rotten couple of days. She had had to spend her Friday before the match, when she should have been preparing, going from interview to interview, trying to justify her actions (and herself). On the court, she was booed. There was a big sign in the stands that said “Cheaterenka.” She had been scolded and interrogated. Almost everyone was against her. “Accused of gamesmanship and dogged by injury, Victoria Azarenka’s bid for successive Australian Open titles on Saturday will pit her against an opponent in the form of her life and a centre-court crowd wary of any hint of bad sportsmanship,” read the Reuters preview of the match.

I don’t know if loneliness is the human condition or a medical one. It didn’t matter. Li Na displayed incredible shot-making and even more incredible courage. For much of the match, she outplayed Azarenka, despite rolling her ankle twice and once badly hitting her head on the court. She did it all with grace and laughter. But throughout everything — throughout even the fireworks (literally, the match stopped for fireworks) — Azarenka managed to stay within herself. It didn’t mean that she wasn’t human. “You’re all heart,” her agent told her. You know, I have to agree.