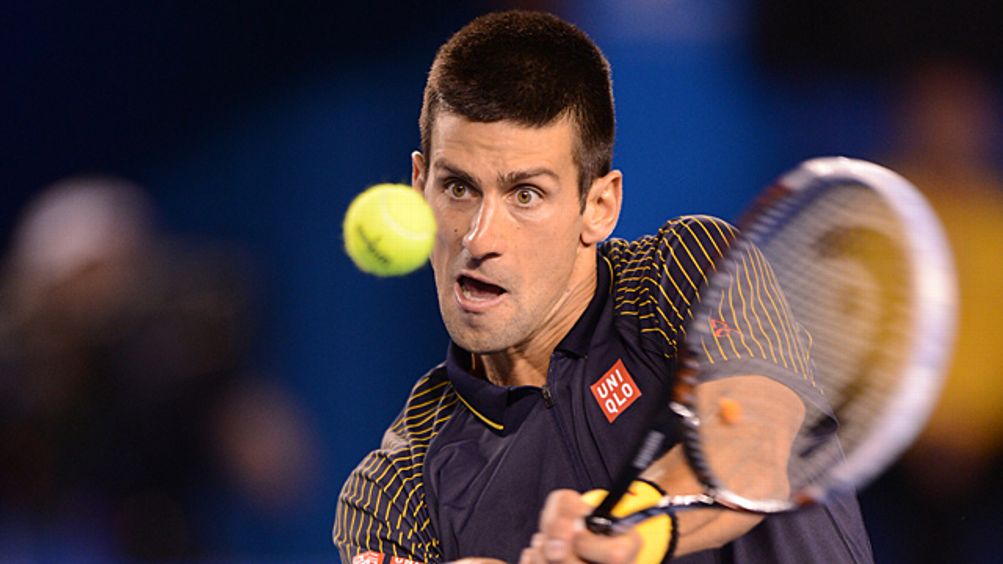 I mean, [in] the U.S. Open final, I had two black toenails,” Andy Murray said afterward. That was the kind of match this was — it left you reminiscing about all the other times parts of your body fell off and/or died. Murray was remembering the state of his toenails in September because tonight he’d had to have a blister on his right foot treated between the second and third sets. Well, it was sort of a blister. It looked more like the cover of a science magazine captioned either Vineyard Disasters or Something’s Gone Wrong With Mars.

Anyway, Murray and his foot and his memories lost, 6-7 (2), 7-6 (3), 6-3, 6-2, to Novak Djokovic, who won his third straight Australian Open final. Djokovic also closed down the Norman Brookes Challenge Cup, the trophy for the men’s singles winner, which hasn’t got room for new names. That was the kind of match this was — even the trophy almost came up short.

I guess Roger Federer’s maybe had a black toenail, in his life.

It wasn’t a bad match, exactly. It was just kind of a curt one, tough and tight in a way that kept it from ever finding a rhythm. There was only one real swing of momentum. Djokovic was half a step off during the first set, then found his stride. Murray started strong, then, whether because of the blistered foot or not,1 fell off. It was clear by the third set that Djokovic was going to win. That kind of clarity doesn’t always mean anything in tennis, but this time it did. And by the standards of the supernaturally great Grand Slam finals of 2012 — the five-hour, 53-minute Australian between Djokovic and Rafael Nadal; the rain-maddened back-and-forth between the same two players at Roland Garros; Federer’s graceful comeback against Murray at Wimbledon; Murray’s bruising win over Djokovic in New York — it seemed a little abrupt.

Not that there weren’t moments. At 4-1 in the fourth, trailing 15-30 in his own service game, Djokovic served to Murray’s ad side, forcing Murray into an off-balance backhand return, then sailed the return way out to Murray’s deuce court, pulling Murray across the full length of the baseline — standard stuff, a totally normal way to set up a point if you’re planning a controlled exchange of groundstrokes: move the guy from side to side until the mass/speed/direction equation leaves him out of position, then hit the easy winner. Only this time Djokovic, as he sometimes does, saw an angle, not exactly one of those where-did-that-come-from geometry-of-the-angels angles that appear to Federer or, say, John McEnroe, but simply the most violent and direct possible way to end the point, assuming degree of difficulty didn’t matter. Which it sometimes doesn’t, for Djokovic; so he topspin-whipped this just achingly acute forehand shot back to Murray’s deuce side, only with no depth; I mean it crossed the net at about 3° off parallel. Picture a drop shot, only at full speed. Murray, who was hedging his way back toward the center of the court from a couple of feet behind the baseline, and who’d been perfectly alive in the point up until then, was suddenly out of position by about 35 feet.

It was terrifyingly good tennis, and had it come at a moment when Murray was offering any resistance, it could have been a turning point in a brilliant match. But it didn’t. Djokovic didn’t need to do it to win — not even to win that game. And so it just sort of hung there for the space of a warm moan from the crowd. A reminder, in case anyone anywhere needed one, that Djokovic is amazing. 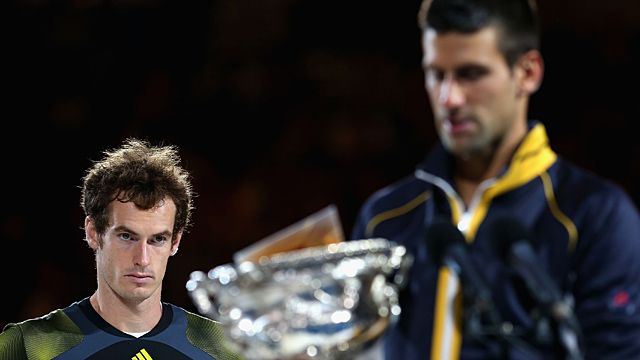 Djokovic is. This is his sixth major title, good for 10th place in the Open era, where he’s tied with Boris Becker and Stefan Edberg. Murray didn’t break Djokovic’s serve once in the final. Neither did David Ferrer in the semifinal. When Murray dropped him into a 0-40 hole in the second game of the second set, Djokovic calmly fended off three break points, serving into the wind. “After that I just felt mentally a little bit lighter,” he said afterward. It happens.

If 2012 taught us anything, it’s that the current state of the men’s game is too unsettled to treat every major as a definitive statement of hierarchy.2 Bear with me on this, but the king in tennis mostly reigns because everyone else shares the intuition that he’s the king. The intuition builds until, for lack of a better metaphor, it becomes its own atmosphere. You know who’s the best, in a way that’s only partly dependent on rankings or even results. In terms of that atmospheric sovereignty, Djokovic’s win doesn’t quite erase the fact that he lost to Murray at the last two big-font events, the Olympics and the U.S. Open. But it does stop the slow erosion of the unquestioned supremacy he’d built up during his astonishing 2011, which thinned out a little every time someone else won a major. He’s the king. But right now it’s the sort of situation where you want to say, He could be the king for years. But maybe check back after the French Open.

As for Murray, he rightly pointed out after the loss that hardly anyone — not Djokovic, not Nadal; not even Federer — wins a major for the first time and then turns around and wins the next one. Counting the Olympics, he’s been in the finals of the last four big tournaments. He’s won two of them. He has every reason to feel good about where he’s going. But for all the talk about his experience and his improved mind-set and how Ivan Lendl now occasionally smiles,3 don’t you sometimes get the weird sense that nothing’s changed with him? Maybe I’m alone on this, but he still strikes me as the most confounding player in tennis. Take this incident from the second-set tiebreaker, and I’m just going to quote the New York Times recap here, because I’d never be able to write this without a lot of parenthetical exclamation marks:

And then — in the tiebreaker that seemed inevitable — there was the feather. Serving at 2-3 after missing his first serve, Murray prepared to hit his second and then spotted a small feather drifting into his line of sight, one that had come from a bird perched high on the edges of the open roof overhead.

Murray stopped his service motion, retrieved the feather before it hit the court and proceeded to double-fault to fall behind, 2-4. He won only one more point in the tiebreaker from there.

“It just caught my eye before I served,” he said of the feather. “I thought it was a good idea to move it. Maybe it wasn’t because I obviously double faulted.”

I mean: (!!!!). Is there any other player about whom these paragraphs could conceivably be written? Here’s the conundrum of Andy Murray: I absolutely believe that he’s the second-best tennis player on earth right now. I absolutely believe that he meant it when he said he was “ready for pain” against Djokovic. And I believe he was sincere about not blaming the blistered foot for his defeat. However, I am also fully prepared to believe that, in that tiebreaker, at that particular moment, he was psychologically shattered by the unexpected appearance of a small feather. Note that I’m not saying he’s mentally weak. He probably would have reacted coolly and intelligently if zombies had come pouring onto the court.4 He’s great in unpredictable conditions — he won the first set against Federer at Wimbledon and the whole U.S. Open partly because high winds played to his ability to improvise. It’s more that his brain is just tricky. Weird stuff can make it feedback-loop. Sudden appearance of North Korean paratroopers, he’s fine; tiny fluttering feather, maybe not so much.

Again, I’m not criticizing. If anything, it makes me like him more. I empathize. The world is a lot to deal with. I see a tuft of cotton at the wrong time, I’m going back to bed for the month, believe me. But the Unusual Darkness Within does make it hard to place Murray within tennis as a whole. Skill-wise, he’s gotten better and better. I expect 2013 to include some moments when he shrugs off agony to do something incredible and some moments when he quietly implodes over a misplaced atom. Where that leaves him at the end of the year, I’ll leave it to his brain to find out. 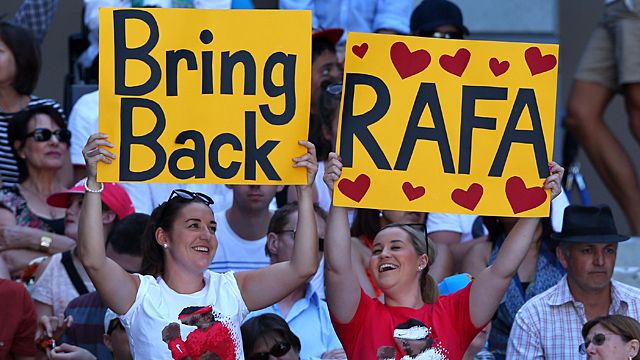 Somewhere in Mallorca, in what I earnestly hope was an all-white weight room with a mirrored ceiling and the poster from War Horse on one wall, Rafa Nadal watched all this play out. Nadal withdrew from the London Olympics and has missed the last two majors with his chronic bad knee and (this month) a stomach virus. But to me, even totally out of sight, he’s the most interesting player in the game right now. It was not all that long ago, remember, that Nadal finally passed Federer and became tennis’s atmospheric king. He was supposed to have, or anyway we all thought he would have, a long, maybe even Federer-like, run at the top. He was one of the best players of all time, and Federer was getting old; who could possibly catch him? Then 2011 happened, he lost to Djokovic in seven straight finals, and the poor-health quicksand grabbed him just when he was starting to catch up. Now Murray has passed him, too. He’s ranked no. 5, which is at least as weird as that time Andre Agassi dropped to no. 141. He’s utterly lost any claim on being the best except on clay.

But Nadal is 26. Twenty-six! He’s less than a year older than Djokovic and Murray. He’s not a holdover from some phased-out generation; this is supposed to be his prime. And tennis — I’ve written about this before — is richer and crazier and more consistently stunning when his berserk tenacity is part of it. Win or lose, no one pushes the other top players to new heights like Nadal does, which is why he’s been involved in a disproportionately large share of great matches over the last … well, eternity. Wimbledon ’07, Wimbledon ’08, Australia ’09,5 Australia ’12; that’s just scratching the surface. Federer’s the greatest player ever, but I’m increasingly convinced that Nadal is the key to the greatness of this whole era.