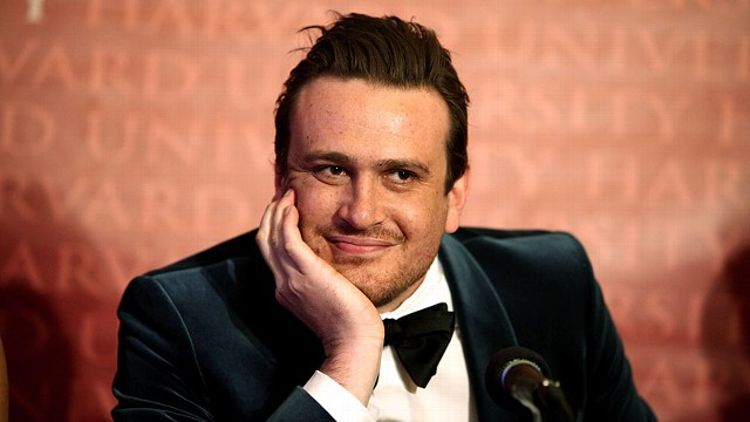 Michelle Williams and Jason Segel: Four years after the death of her ex Heath Ledger, “If anyone deserves a little chivalry and happiness, it’s Williams,” who is “finally moving on with Segel, 32. After years of platonic friendship, the two have turned up the heat, meeting for several intimate dates in New York and L.A.” An insider says “Romantically, this kind of happened overnight!” He won her over by being good with her daughter Matilda, prompting her to tell a friend “I love him!” Let’s hope Segel isn’t just trying to promote The Five Year Engagement with this romance, since “Michelle doesn’t do flings. Every person she gets involved with is someone she can entertain the possibility of spending the rest of her life with.” No less of a cad as Russell Brand has spoken of envying Segel’s rampant cockmanship, calling him “a falcon among gulls when it comes to womanizing.” But supposedly “Jason is trying to be more of a grown-up lately. He is taking care of himself more, exercising, eating right and dressing better. Basically, not acting like a frat boy anymore.” He thinks Michelle is “the kind of girl he can bring home to his mom.” Segel has been perma-single with side trips to the Isle Of Lohan since splitting from Lindsay Weir (Linda Cardellini) while Williams has weathered failed relationships with hipster directors Spike Jonze, Cary Fukunaga, and other “assholes who didn’t treat her right” and were “just looking for an unserious situation.” Let’s hope “puppet collector” Segel can step up to the plate. “Jason can be a bit of a playboy. The only way this will work is if he completely devotes himself to Michelle.” “She wants a good guy who will give her a stable family life.”

Anne Hathaway’s Les Miz Diet: “She is losing weight for the part, since she plays a prostitute dying of tuberculosis.”

Jesse Eisenberg’s Meowcial Network: “The more movies I do … the more cats I feel I need to get.”

Canadian Psycho Justin Bieber Pranks Taylor Swift: “She’s such a sweet girl, so I wanted to, like, make her cry.”

Misc/Etc: “Goddess alert!” “sporty-glam girl in my surf dress” “he sends her threatening, horrible emails” “malignant narcissist” “EXTREME DIETING!” “jokes the single actress” “I have a really bad nut allergy” “a massive internal eye roll” “he had painted abs” “bodybuilder turned kidnapper” “I’m going to the slots!” “Riri’s pants allergy” “a quick seat-of-your-pants romance” “He danced with local women!” “dallied with nearly 100 guys” “a liar who’s into kinky sex” “94% said not bloody enough” “with cheaters, once you abandon someone once, you will abandon them again” “the cost of being casual” “it’s impossible to recapture the good times” “I just love fashion too much to wear a tracksuit” “I’m so busy I’m dating my novel!”

Rihanna/Ashton Kutcher/Chris Brown: “Rihanna’s hot and heavy hookup with Ashton Kutcher has her violent ex, Chris Brown, steaming!” That dude sure can froth. Brown “warned Ashton via their mutual friend, Diddy, to keep his distance from her.” Ashton laughed it off, “but Diddy told him that Chris was dead serious and really worked up about the idea that Rihanna has moved on.” Ashton was hoping the hookup wouldn’t get out, and “Rihanna thinks that Ashton could cut off all contact with her because of Chris’ interference, which she thinks is absolutely what he wants.” While Brown is still with Karrueche Tra, “he’s still very much in love” with Rihanna, but Riri told him to back off threatening Ashton. “This fling with Ashton is a way for her to forget about wanting Chris back.”

Lindsay Lohan Still Loves Sam Ronson: “Old habits die hard for Lindsay Lohan. The 25-year-old, whose probation has just ended, is determined to win back ex Samantha Ronson, 34.” It’s so weird that she’s only 25. “Lindsay has been asking Sam for another chance for months. She’s dated a few guys but nothing has worked out.” Working out her issues, “she’s longing for the stability and comfort her relationship with Sam gave her.” Oh yeah, because that relationship seemed super stable and not at all insanely volatile. “Lindsay’s convinced Sam is the perfect partner for her.”

Tim Tebow/Taylor Swift/Dianna Agron: “Taylor Swift and Dianna Agron are locked in a tug-of-love for the same guy.” A TUG-OF-LOVE. “The two women have their eye on gridiron phenom Tim Tebow, adding that Taylor fell hard for Tim, 24, after they first connected at a pre-Oscars bash.” A source says “Taylor and Tim kept in touch.” But Tebow “has also been pursuing Dianna, and the athlete asked both” to his “Tim Tebow Foundation Celebrity Golf Classic.” Perennially competitive Tracy Flick Taylor is “sure that she and Tim are a better match.”

MTV Begs Teen Moms “No More Boob Jobs!”/Jenelle’s LSD Trips: “Jenelle’s the third teen mom to get a boob job,” after Season 1’s Farrah and Maci did too.”MTV has an idea of how they want the girls to come off, and big fake boobs isn’t it. They’ve even called the other girls and begged them to hold off on surgery. It was one thing when it was just Farrah, but now it’s out of hand.” Maybe Jenelle will give up on fake tits now that she’s gotten into “secret LSD use and questionable behavior around her 2-year-old son.” Even though Jenelle is on probation, “she’s been doing Ecstasy, drunken E&J brandy, popping Xanax and snorting Adderall,” but her “new drug of choice is acid. She just does it a lot. She fell in love with it. It’s just a little sheet that she puts on her tongue and waits for it to hit her. Then she gets all weird.” When her probation ends, “she’s going to smoke a big blunt, that’s what she told me.”

Misc/Etc: “Happily accepting a sliming” “ditched her signature sex appeal” “finally, an older woman superhero!” “Her whole family thinks that he’s really shady” “it’s not witchcrafty or anything” “Chord Overstreet partying at Pink Taco” “He can’t handle her fame. She’s bored and over him.” “I assumed they were a couple!” “morning sickness all day long” “close pals have told her that the relationship is embarrassing” “We will never say the word divorce! We don’t even allow that word to exist.” “I don’t give a fuck what you do, just bring me a check” “I MARRIED A MONSTER” “tawdry affair with his 18-year-old secretary” “to be married in our profession is not an easy thing, there’s too many beautiful people around” “tiny yellow truck” “a self-centered blowhard version of himself’ “I think he’s using her a little”

Kourtney Kardashian Alone And Desperate: Pregnant Kourtney tweeted “Watched Blue Valentine last night hysterically crying. So depressing how people can be so in love, and then it just goes away.” Was she commenting on her “hopelessly immature boyfriend Scott Disick” who “was spotted thousands of miles away at Miami’s LIV nightclub, partying with Kourtney’s pal Jonathan Cheban — who seemed to be acting as Scott’s wingman as he flirted with dozens of girls. He was chatting up girls until 4 a.m.” Yikes. “It isn’t the type of behavior anyone would associate with the father of a toddler — let alone one whose girlfriend is in the final stages of her second pregnancy.” Unless he is Don Draper. “While she once believed a second child might make Scott finally step up to the plate and think of someone other than himself, Kourtney has all but given up hope.” A friend says “She never even talks about getting married anymore. It’s sad.”

Ryan Gosling & Eva Mendes: “Are playing house in Thailand, taking a practice run before walking down the aisle” while he shoots Only God Forgives. “She’s taken on the role of housewife. They are living together and she’s literally doing everything for him.”

Miley Cyrus Topless and Attention Hungry: “For most young women, it would be reason to go into hiding for weeks: a shocking topless photo taken at a private party, but spreading to strangers and even blogs. Yet when such a picture of Miley Cyrus surfaced recently, she was not only unashamed, she seemed to relish the publicity.” The flashing pic is no big deal because “Miley loves to get wild.” Why do I hate the tone of this article already. “She’s willing to do anything for attention, and the more successful her boyfriend, Liam Hemsworth, gets, the ‘wilder’ Miley seems to behave.” Can you really blame a bitch though? “She feels like a total failure” as The Hunger Games garners Hemsworth new fans and roles. “He’s checking out bachelor pads in Hollywood” without telling her. “He doesn’t want Miley to know that he’s getting his own place.” I mean, she’ll figure it out. “Rather than rise above petty jealousy, Miley has allowed it to take over her life.”

Misc/Etc: “Swallows her ridiculously hot bod” “she’s so gorgeous, it’s annoying” “marriage is a crapshoot, the odds are bad” “I’m like a lioness” “you look like a 90s club kid!” “he sees them more as sisters than potential conquests” “his baby-hungry wife” “the businesswoman is now just a housewife” “Operation Royal Baby” “lapping up the attention from female fans” “But if he did, it’d be in sexy undies!” “hit with this snowstorm of bologna” “beach body showdowns” “professional vacationers” “I don’t feel older, and I don’t feel like I look it either” “only the best-looking, most well-mannered guys” “all of the breathless praise lavished on William for his toned body and endless charisma is no laughing matter.”

Justin Bieber’s Plans For His Last Day On Earth: “Just cuddle with my family, because I love cuddling.” OMG ME TOO JUSTIN BIEBER!!!

Charlize Theron On Her Recent Role Choices: “I’m a bitch. Picasso had his Blue Period, and this is my Bitchy Period.”

Russell Brand & Katy Perry’s Model Wars: “The aftermath of Katy Perry and Russell Brand’s abrupt break is playing out like a high-end fashion show, as both are now hooking up with some seriously sexy supermodels! The blue-haired Katy, 27, has been seen getting très close with her rumored new beau French model Baptiste Giabiconi, who at 22 just happens to be the highest-paid male model on the planet! The two were recently gallivanting arm in arm in Paris. Meanwhile Russell, 36, is apparently finding romantic rapture with Hungarian stunner Nikolett Barabas, 32.”

Jennifer Lawrence Continues To Provide Great Quotes: “When I get my first real check I want to bathe in a pool full of pasta.”

Kendra Wilkinson-Baskett’s Marriage Tips: “The other day, little Hank was in the living room watching Toy Story with us, not even moving or anything, so Hank’s like, ‘Come in the kitchen!’ and I’m like, ‘Okay,’ so we go in the kitchen and we just hit it right there.”

Misc/Etc: “We literally live our lives on TV” “a single mom who captured America’s heart” “I haven’t done that since fourth grade” “spoiled with massages” “having ditched her flaming red mane” “I ice my body down” “mingles with the regular folks” “then there is no debate as to whether you two are an item” “Miss Kisses LaRu (also known as Monkey)” “she had bones showing through her skin” “bumps are the new bling!” “at 35 it’s hard to maintain Stifler’s energy” “she resumed blogging” “a little-girl wonderland” “I love being pregnant” “it’s striptease aerobics” “he’s struggling with a terrible rep in Hollywood” “happy to turn a blind eye to his harems as long as it was under wraps” “spring’s most alluring kissable lips” “you never know where the last official night of singledom will take you” “refreshing remixes” “she’s such a ham!” “I just ate some kale” “I punched myself”

Five Questions on American Idol: The Top 8 Time-Travel to the '80s