The Faces of Wimbledon: Bradley Cooper and Gerard Butler’s Most Unforgettable Reactions at the All England Club 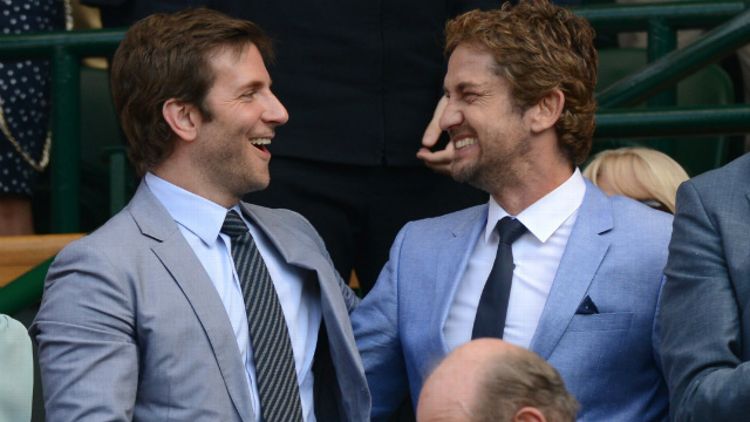 On Sunday, Hollywood superstars (well, one Hollywood superstar and one guy who apparently has pictures of Hollywood in a compromising position with some heavy farm equipment, so Hollywood is forced to keep giving him jobs) Bradley Cooper and Gerard Butler put on their best blue suits and took in an afternoon of tennis at Wimbledon. Fortunately for the world, photography wire services recorded their every reaction to the thrilling finals match unfolding before them, during which Butler’s countryman Andy Murray became the first British player to win the men’s tournament in 77 years, and also during which Cooper became the first American actor to publicly ignore his new, bored 20-year-old model girlfriend while high-fiving/hugging/selfie-posing with a Scotsman who once sat next to Katherine Heigl while she pretended to be tortured by remote-control panties. History was made on several important fronts yesterday.

These are the most sublime Cooper and Butler faces captured during Murray’s distracting triumph.

The Bored Model, the Respectful American, the Distracted Scot, and the Penny Marshall Doppelgänger Who’s Pretending Not to Watch Them The ‘Holy Crap, I Just Realized My Girlfriend Is 20! Nice! Hey, Are You Listening? Ugh, You’re Cracking Walnuts With Your Buttocks Again, Aren’t You?’ Do Butlers Dream of Electric Coop? The ‘I’m Gonna Make the Toothpick a Thing. I Can Totally Pull It Off, I’m Huge Now’ The ‘Hey Brad, What If I Could Turn You Into a Baby, Put You in a Björn, and Wear You Around? OK, But What If I Also Have a Flamethrower?’ Let’s Meet Here Every Year and Do a New Version of This Selfie, to Mark the Passage of Time in Our Beautiful Friendship and the Slow and Inexorable Tightening of Our Suits