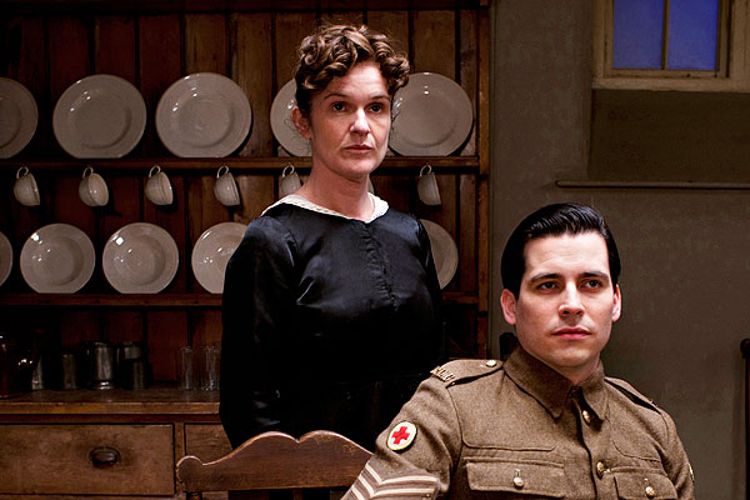 In the basement of Downton Abbey, near the long dining table where the servants are free to take their meals and frontstab each other in relative peace, there is a large wall of bells. This low-tech communication system, which long predates the electric lights and telephone lines that so freaked everyone out in the first season, is really quite brilliant. When something is amiss in the great house, all a member of the Crawley family needs do is demurely tug on a sash and, within moments, an able footman or a merry maid will appear to properly affix a cuff link, refill a biscuit jar, or renew Lady Sybil’s subscription to Industrial Worker (and the Women Who Love Them). It’s an elegant solution to a messy problem: how to keep things moving without any of the wires (or pulleys, or bells, or Daisy) showing.

It was hard not to think of the cleverly designed inner workings of Downton Abbey after an episode in which much occurred but very little of it smoothly. Expanding the reach of the program to deal with massive societal change and the Great War while still servicing every character (including those in service) is a task more devilishly difficult than mending a frayed waistcoat. And so while the third installment of Downton’s second season was no less charming than those that came before, the seams were showing, as if precisely organizing and arranging all of his well-mannered chess pieces had left creator Julian Fellowes as winded as Mr. Bates on an Escher staircase.

Take, for example, the sudden banishment of Cousin Isobel Crawley, who’s gone from inspirational feminist crusader to meddling egomaniac in the time it’s taken to transform Downton from a country estate to a ping-pong-fueled youth hostel (only with convalescing officers in lieu of beery Australians). As 1918 dawns and the cameras swoop and spin over the crowded foyer like Aaron Sorkin in an ascot, the tension over the management of the house boils over. Sick of being undermined in her own mansion, Cora has usurped Isobel’s duties, leaving the latter feeling dreadfully undervalued. Isobel then threatens to leave Downton entirely and Cora, in a ballsy move that contradicts her permanent case of Adult Baby Voice, murmurs something about that being a fine idea and turns back to her letters, which is the 1918 equivalent of chunking up the deuce. Cousin Isobel, blissfully free of the Crawley tendency toward procrastination (the one that keeps Mary dithering about suitors for entire military campaigns at a time), promptly goes big, not home, immediately decamping to France to help in a field hospital where her busybody ways and impeccable usage of the accent égout will be more appreciated.

This hasty departure conveniently, if a bit clumsily, clears the decks for the episode’s other storylines. In the first, Matthew — back on the front lines for a few days between crumpet parties at Downton — leads William on a patrol near enough to enemy lines to smell the sauerkraut. The two are spotted and fired upon and then not seen again for quite some time. (I, like all viewers I’m sure, was immediately convinced the two were being ground up for blutwurst and that the show would somehow have to move on with the next in line for the Crawley family estate, John Goodman.) Their sudden absence leads to all sorts of anxiety back at home, where Grantham is forced to confront his paternal feelings for his third cousin (twice removed) and unable to bring himself to alert Mary. (Edith, of course, has no such trouble, finding the time to spill the beans amidst her busy schedule of Wilfred Owen recitations and ping-pong umpiring.)

Isobel’s absence — and her apparent ignorance of her son’s peril — also has an effect on her forsaken household. Left alone with no one to serve, Mrs. Bird begins operating an illicit soup kitchen for downtrodden vets (which also allows a reblossoming of the pleasant cook-on-cook fellowship between her and Mrs. Patmore), while Mr. Molesley attempts to sew and brush his way into a gig at the big house. This bit of business was actually fascinating: In all the focus on the class differences between upstairs and downstairs, we’ve rarely been given a glimpse into what’s going on next door. It turns out the world of service is as segregated as high society; Molesley’s desire to polish the silver in the big house is a dream of social mobility as lustful and illicit as poor Ethel’s fantasy of postcoital life with her naughty Major. But if Molesley isn’t necessarily second class he is most certainly an afterthought; no man can ever take what’s rightfully Bates’. After a kindly visit to his after-hours pub by a humbled Lord Grantham (who, it must be added, does not appear uncomfortable amidst all the cider slingers; contrast that with Mr. Carson, who spits out the word “public house” as if it had a taste worse than Branson’s motor oil soup), Bates happily (and conveniently!) takes his old job back.

No ingredient in Downton’s heady stew has seemed more labored this season than the moralistic peregrinations of Mr. Bates, whose self-banishment, first to life with his shrewish wife and then to toil amidst the lager heads at the Red Lion, serves only to delay the story, not enhance it. Now he’s back in the fold, along with his nemesis, Thomas (“couple of bad pennies, you and I”), and his angelically patient love, Anna. (And when Anna says she’s ready to get used to “feeling what happiness is,” it’s dire foreshadowing as obvious as back in the premiere when a random infantryman delivered a thoughtful speech about the vagaries of life and death only seconds before being trepanned by a French bullet.) Still, it’s good to have the big lug back and once again in the vicious crosshairs of O’Brien. (She’s in need of a new target as her other great attempt at snitch warfare, about Mrs. Patmore’s pilfered turkeys, only ends up backfiring with Lady Grantham reborn as a hash-slinging humanitarian and O’Brien herself reduced to slicing stale bread for the disadvantaged.)

While everyone else at Downton is either struggling with the status quo or desperate to return to it, only Lady Mary pushes gamely ahead. Her character’s arc — from spoiled porcelain doll to world-weary realist — has been the show’s most fully realized, and so her behavior this week felt the most earned. First she cautions Sybil about her dangerous flirtation with the somehow-still-employed Branson (“Don’t be such a baby. This isn’t fairyland. You’d marry the chauffeur and we’d all come to tea?” Classic fairyland!) then she gamely wobbles with the weight of Matthew’s apparent demise (which, in true Soap Edwardian fashion, occurred just after he read about her intention to marry the muckraking Sir Richard). At episode’s end, when an unharmed Matthew arrives at Downton just in time to pick up his half of a romantic duet, it’s Michelle Dockery’s performance that lifts the scene from sweetly silly to sublime. Too proud to admit her feelings and too controlled to let them show, Lady Mary’s lovely face is a great war all its own.