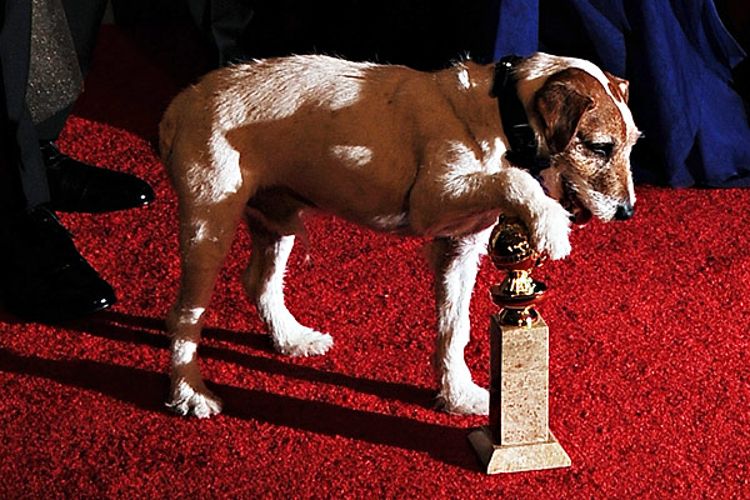 Make no mistake: Awards season is a cutthroat time, when even the most normally civilized and magnanimous of Hollywood’s citizens transform into rapacious hyenas fighting for the best position from which to gnaw on Oscar’s gilded carcass. Do you remember how charming those adorable French people from the silent movie seemed at the Golden Globes, even inviting their canine costar onstage to share in the glory reflected from a second-tier statuette? Well, the time for bonhomie is over with tomorrow’s Oscar nomination announcement looming, and good-natured hugs and two-cheek kisses supplanted by blows to the windpipe and shivs between the ribs. Take those same Artists at the London Critics’ Circle Awards a few days ago, confronted by the possibility that Uggie the Dog, who had so recently charmed on the Globes stage alongside his two-legged cast mates, might get the kind of plaudits denied Rin Tin Tin, the actual, if criminally unrecognized Best Actor winner of the first Academy Awards in 1929.

So how would you feel about that, presumptive Oscar nominee Jean Dujardin? “It’s just a dog! Uggie and George Valentin are the same character. Uggie is me and George Valentin is Uggie. So they’re the same silhouette.” And how about you, Best Director mortal-lock Michel Hazanavicius? “He’s a dog, not an actor. He doesn’t care about awards. […] He doesn’t work as an actor, he works as a dog. He wants sausages, not awards.”

Has anyone asked Uggie what he wants? Why can’t he have sausages and awards? Or better yet, an award made of sausages? (And no, we’re not counting that Golden Leash bullshit. They’re an insult to a true performer like this. Who do they think they’re dealing with, the Frasier mutt?) Where’s The Punisher when his furry friend needs him? There was plenty of room for a Supporting Actor play with no obvious intramural conflict. Harvey Weinstein should’ve been working the cocktail party circuit on the dog’s behalf with the same unrelenting ferocity he offers his other talent, promising every academy voter five minutes alone in a quiet room with the star, an envelope full of cash, and a jar of gourmet peanut butter. There’s no reason the petty jealousies of his suddenly greedy costars should stand between Uggie and a chance at Oscar immortality. Bitches, all.