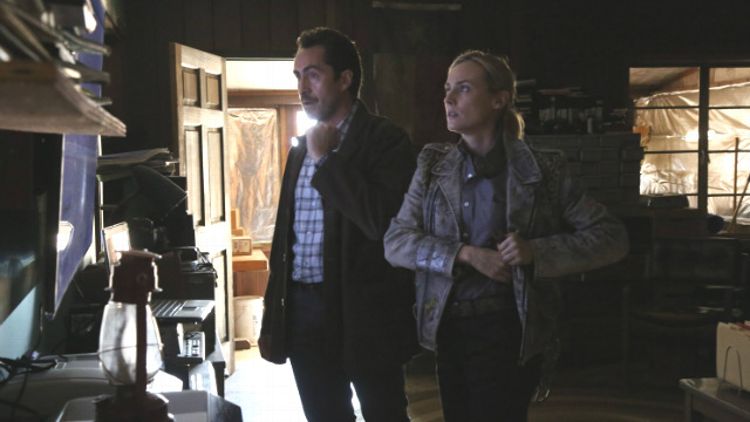 When given a choice between doing something easy and doing something hard, television usually just punts and tries to build a sitcom around Pamela Anderson instead. Yet in 2013, our screens are overrun with complicated, creepy murder investigations. And detective stories, despite what Encyclopedia Brown and Jessica Fletcher would have you believe, are hard to do. This is especially true on TV, where convention tends to dictate a culprit with whom the audience is at least passingly familiar. Since audiences are savvier than ever about these things and, thanks to the Internet and recaps like this, more than ready to spend their free time between episodes obsessing over clues and picking for nits, introducing a secret killer into your cast and then keeping him or her both hidden and plausible for the length of the season is nigh on impossible. Don’t believe me? Ask Veena Sud, who took two years to seemingly pull a resolution out of her hat. (It was a waterproof rain hat. I checked.) Or ask Chris Chibnall, currently twisting in the very same wind on the otherwise worthy Broadchurch. Often the goals of a successful series — world-building, character-enriching — are very much at odds with the false leads, red herrings, and dead ends that characterize a detective story. There’s a very short walk from “whodunnit” to “Who cares?”

The Bridge, by contrast, has never seemed particularly interested in being a detective story per se. Yes, there are detectives and, yes, there is a killer. But the true mysteries of The Bridge lie in the great swaths of land and stories surrounding the U.S.-Mexico border. The show is best when it applies its own level of Sonya Cross–like focus not to any particular crime but to all the fascinating people — potential victims, criminals, witnesses, friends and family — living and striving in its jurisdiction. Even so, I have to tip my ten-gallon to the way The Bridge upended any lingering expectation and, perhaps, good sense last night. On most contemporary crime shows, the seventh episode is when the first red herring is finally pulled up onto the deck of the police boat, examined, and then — usually at great cost — tossed back into the sea. “Destino” went in the opposite direction. Over the course of its breathless 41 minutes, it introduced us to a suspect (tech-savvy doomsday prepper — and author! — Jackson Childress), staged a violent shoot-out with said suspect, and then brought him into custody. So much for convention.

Sonya, through her broken ribs, remains dubious of the idea that Childress worked alone, and indeed anyone with a working sense of FX scheduling should probably agree with her. (There are six episodes left. Despite my most fervent desires, they will not be spent trailing Marco Ruiz on a walking tour of where to buy Juárez’s best conchas.) Even so, The Bridge showrunner Meredith Stiehm contributed too much to the Homeland writers’ room not to appreciate that show’s greatest innovation: Tampering with timing and viewer expectation can produce jolts greater than a surprise plot point or drawn-out reveal. And Childress does seem to be connected to all the mayhem at the border. As his dong-shaking, bath-salts-taking pal admitted, Childress has more than his share of “crazy days.” The truth is, I actually found myself hoping that this is “the Bridge Butcher.” Because not only do I find the killer’s overly busy reign of terror a little dull, I think the show has done a fine job illustrating that one serial killer isn’t necessarily the same thing as “The Beast,” the faceless cloud of violence that rushes in to fill any void created by the toxic combination of poverty, inequality, and greed. There are bad guys and then there’s evil.

If you’re getting the feeling that my admiration for “Destino” was, like our heroine, lost somewhere in the details, then I’m afraid you’re right. I appreciated the plot machinations more for what they said about the show going forward than what they accomplished in the present. Despite some shocks and a well-edited shootout (the return of Seabiscuit, the yappy terrier, at precisely the right/wrong moment was a highlight), this may have been the weakest episode to date. (The camera angles chosen by director Chris Fisher, while inventive — molar cam! — didn’t really help.) One week after taking a teenage charge out for burgers and violent death, Ted Levine’s Hank — the grizzled veteran — once again led his people into a situation that could charitably be called fairly absurd (and Hank himself might call “totally FUBAR”). The Bridge and I are at an early stage in our relationship; I’m smitten, but pulling a classic bad-boyfriend move like turning the show’s most trusted cog into a secret villain would be grounds for a quick breakup.

To be fair, “Destino” also did much to lift the shadow of guilt from two of the other strongest characters. Johnny Dowers’s Coop seemed to be a popular pick for the heavy in the early going because (a) he was a cop, and (b) we’d met him. His behavior last night, right up to and including drowning his sorrows in that classic Texan cocktail of whiskey and banjo, should do much to clear his name. And then there’s Deputy Matty Stokes, the migraine-suffering, coyote-killing, bone saw–discovering comic relief. Poor Matty. His continued presence on The Bridge was one of the things that gave me confidence in the show, that it was as interested in the oddness of its wider world as it was in its crimes. Blowing his face off in midsentence was, like Gina’s death a week ago, a bold and unsettling decision by the writers. But as was also the case with Gina, it’s the sort of move that could backfire. Memorable characters are more valuable to fledgling shows than wheelie bags full of greenbacks. Sacrificing them in the name of plot occasionally means leveraging the future for a more memorable present. Then again, there are few things more memorable than watching a man’s head explode.

Speaking of head, Ray’s negotiations with Graciela took a surprising, southerly turn last night. (In fact, I’m not really sure I’m comfortable referring to “Graciela’s tunnel” in future recaps.) This was a scene straight out of The Weird Bridge, the shadow show that sometimes bubbles up and interrupts the straight one FX initially green-lit. (Other hallmarks of The Weird Bridge include: Monty P. Flagman; Steven Linder’s shirt-buttoning technique; the sweat problems of Fausto’s no. 1 lieutenant.) And I appreciate the way Ray, all bronzed and burnished, is portrayed unequivocally as a himbo. It’s a gender reversal that TV rarely depicts. Yes, Charlotte is the one who raised eyebrows all over Texas when she, a “hostess” from Tampa, married the rich Carl Millwright. But it’s Ray who will actually do anything to get ahea — Sorry. Who will dive face-fir — Nope. Who will stop at nothing to get what he wants.

“I’m not a messenger, I’m a conduit” is how Steven slurred it, while sopping up the remains of his enchiladas (and before conveniently trying to steal the girlfriend of the homicidal drug lord whose acquaintance he made on the side of the road just days earlier). And I think the same could be true for The Bridge itself. “Destino” may have been the tipping point between the show it has been thus far and the show it intends to be in the future. At least I hope so. Because at present, there’s an increasing imbalance between all the fascinating quiet moments — Alma (the spectacularly good Catalina Sandino Moreno) and her awkwardly lusting beardo; Cesar stepping away from his idyllic family life to pocket ill-gotten gains from his employer/partner; Hank talking to Coop about guilt and consequences — and the noisier central plot. Now that the cops have gotten their man, here’s hoping the next thing they get is a little weird.