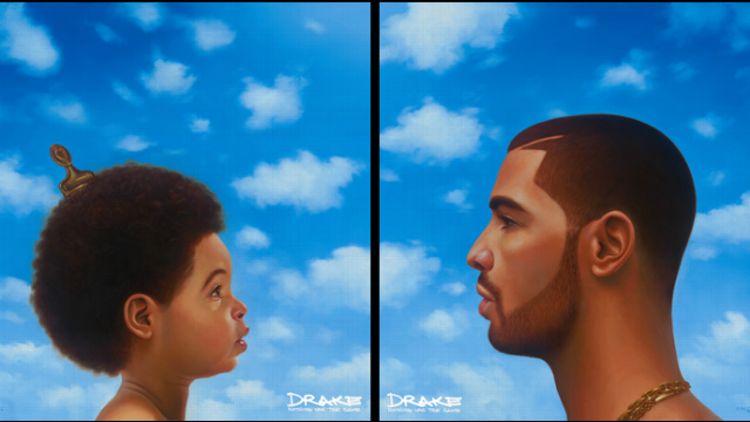 Aubrey Drake Graham did this to the universe of oxygen-inhaling humans with Internet connections last night.

This is the artwork for his highly anticipated upcoming album, Nothing Was the Same, set to be released on September 24.

If you’re seeing this image for the first time, I envy you. Cherish this moment, because the thoughts you’re having can never be replicated.

Last night, driving through Montana, I received a text from a friend that simply said “Aubz.” Since this is my equivalent of a Bat-Signal, I pulled over in a Motel 6 parking lot to see what was up.

Upon seeing it, my initial reaction (and probably yours) was to make fun of Drake for thinking this was a cool idea. For signing off on this as the art for his album, a musical project that one assumes he cares about.

Right after that, 10 minutes of laughing at Drake for his clear inspiration.

The thought of Drake up late one night, writing a verse about the pain he feels finding out that the girl he loves has been sending Snapchats to multiple guys and not just him, and then turning on MTV Jams, seeing this video, and suddenly knowing what his cover art would be, is a thought I enjoy having.

Following this, a bout of confusion. Because there are so many questions.

Why is that little boy looking at Drake, but Drake’s refusing to look at the little boy? He’s all like, Hey Drake, it’s me and Drake’s all like I want that hair pick. Also, has Drake always looked so much like Nala?

The final stage of this initial reaction is to wonder why Drake would do this to himself. Why would he open himself up to so much predictable mockery?

Why would he give us the pleasure of laughing at his expense?

Because Drake is a humanitarian. He’s not doing anything “to himself.” He’s doing things “for us.”

He wants us to laugh. At his expense.

I’m convinced of it.

He knows he’s pulled a fast one on the world, making the transition from The N to claiming that he’s going to give Halle Berry a baby and that no one can stop him. So, because of that, things like this album cover are his way of saying thank you for letting him live out his dreams.

So laugh away, people with eyes.

Drake wants us to.

The Top 64 Songs of the Millennium Playlist