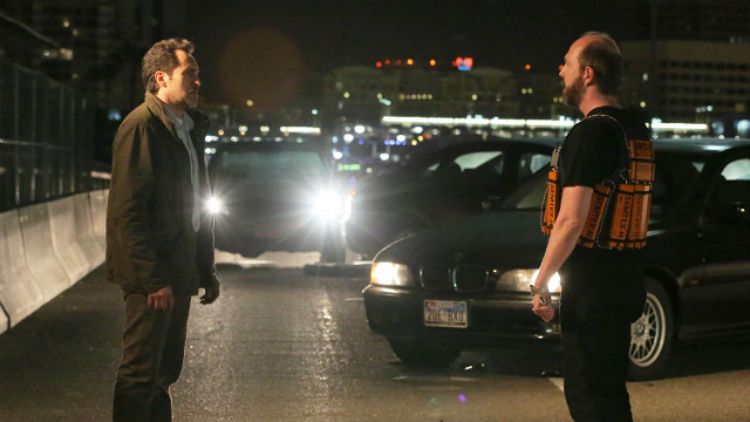 The alcohol- and regret-soaked body of Daniel Frye wasn’t the only thing that went flying off The Bridge last night. Right along with him went my sympathy, my patience, and, if we’re being honest, most of my hopes for a second season. Other than a brief shootout between Tampa Ray and some soon-to-be dead men in the teaser, “Take the Ride, Pay the Toll” was a strangely brief (39 minutes sin commericales) episode that was completely hijacked by the deadly nonsense of a madman. When the unflappable David Tate swerved across the Bridge of the Americas, then stripped to his Semtex skivvies, my thoughts went immediately to the same place as Hank’s. “There is no good outcome here,” he hissed. “None.” I hate to say it, but he’s probably right.

It’s a very strange, very specific experience watching a TV show jump the rails. It’s a bit like seeing a car crash in slow motion: You want to yell out, warn everyone. But it’s too late. The brakes aren’t working. The brick wall is too close. Last night, the flapping of a few script pages in Denmark finished their transatlantic journey as a hurricane that upended one of 2013’s most promising new shows. I hope I’ll have a chance to ask Meredith Stiehm and Elwood Reid about their decision to track the inherited plot from Broen so closely — assuming the decision was theirs to make. I wonder if it’s just a case of something seeming stronger on paper. Or — and this strikes me as more likely — a serial-killer plot just seems more dependable in those first, fevered days of season-planning and story-breaking. At least with a mastermind you know what you’re going to get, even if it turns out to be depressingly formulaic. In the early going, before the cameras rolled, there was no way to assume that The Bridge would be able to capture such a hypnotic sense of place and mood, that its colorful rogue’s gallery of supporting players would prove superior to the main casts of most other cable dramas. It’s hard to blame Stiehm and Reid for doubling down on the big thing. How were they to know that the little things would add up to so much more?

Last week, I complained about the way the emergence of David Tate–as–Dr. Evil had robbed The Bridge of nuance. Last night revealed an even greater crime. In Marco Ruiz, Demián Bichir has created one of the more memorable heroes in recent TV history. Despite his sins and appetites, Ruiz has been presented as much more than a typical, fundamentally heroic antihero. He’s not, like the swaggering ciphers on Low Winter Sun, a “good man” forced by circumstance to do bad things. He doesn’t operate in black and white, and he’s too complicated to be painted in shades of gray. He’s simply Marco: a knotty individual capable of loving his family more than anything and still hurting them in unimaginable ways.

But the moment Tate dragged Marco onto the bridge and revealed his endgame — and by the way, my interest vanishes faster than a tequila shot in a border bar the minute a villain starts saying things like “let’s get started” — there was nothing Bichir could do. It was supremely unfair to the dignity of both character and actor to strand him in a scene with nothing to do but capital-E emote and scream “Where is my son?” (And it doesn’t help when the character’s idea of heroism is flinging the gun toward the supervillain. Come on, Marco. They show movies in Mexico!) Worse, the idea that shooting Daniel Frye would be an opportunity for Marco to get back at the enemies of “real Juárez” was irritatingly reductive, an unearned bone tossed to those of us who had once been so impressed with the show’s willingness to address legitimate skeletons. When Marco begged his one-time pal to “stop with all these bullshit games,” I couldn’t help but intuit some actorly anguish in his voice. Tate’s omniscience — such timing! Such magical, light-killing iPhone apps! — had rendered all of Bichir’s subtlety irrelevant, leaving him gasping, shouting, and stamping his feet in frustration. “He’s engaged the vest. He’s in control now,” is how Hank observed Tate’s display. But the unfair transfer of power happened weeks ago.

You know what the worst thing about all of this is? The emotional threads that “Take the Ride” attempted to yank had all been supremely well-woven! The idea that so much would hinge on Sonya’s perverse idea of friendship, that her desire to pursue and protect nothing but the truth would cause her first to lie and then to put a bullet in her partner — this is heady, dramatic stuff. Still, I can’t help but think there was a more effective way to communicate all of it. That Sonya was ultimately too late to save Gus, that she wasn’t able to trace a pipe quickly enough, was cruel and brutal. (Though don’t get me started on the dramatic stakes of a pipe.) In a different context, I would be cheering The Bridge’s bravery here, in confounding expectation by avoiding the cliché, last-minute reprieve and, in so doing, ripping out the heart of its hero. The final moments of the episode, in which Marco, soundtracked by target=”new”a mournful Nick Cave, touches his hand to the unmoving chest of his dead son, was quietly devastating. Director John Dahl framed the conclusion with admirable restraint and ghost-lit delicacy. But it was cheapened by the long shadow of David Tate’s gamesmanship, rendering it just another move in a never-ending contest that The Bridge treated like chess but felt, by the end, like Parcheesi.

I’m not happy about any of this. The thought that there are still two episodes remaining for the show to pivot in a fresh direction is encouraging, but only a little. The Charlotte story line, once so promising, has spun off into abstraction. Graciela is dead, Frye is in a coma, Fausto and Linder have been sidelined, and my man Monte Flagman is stuck on the bench, munching three-bean salad while he waits for another opportunity to shine. What’s even more frustrating is that David Tate’s central obsession last night, that his beloved son died, alone, in a “cold, dark place,” is unquestionably powerful and deeply horrifying. Gus’s sad fate cast his weeping incomprehension just a week ago in an even more agonizing light. He didn’t know why any of this was happening. He didn’t know where his father was. He died with both questions screaming in his head. This sort of awful emotion doesn’t require plastic jugs or perfectly timed traps. The real lesson of border violence is that sometimes the very worst men don’t wear masks.

One of the best things about The Bridge in the early going was the way all of its characters had been touched by death — that dark and violent beast — not as an abstraction, but as an unforgiving reality. What set the show apart from a legion of opaque, murdery hours was its respect for victims on both sides of the border; the show treated them as people, not plot points. The reign of David Tate undid nearly all of that, turning fascinating American and Mexican faces into plastic pawns. The game is now over. But it never should have been a game at all.