How Will Seattle Fare As the Latest City in Bravo’s Reality-Exchange Program? 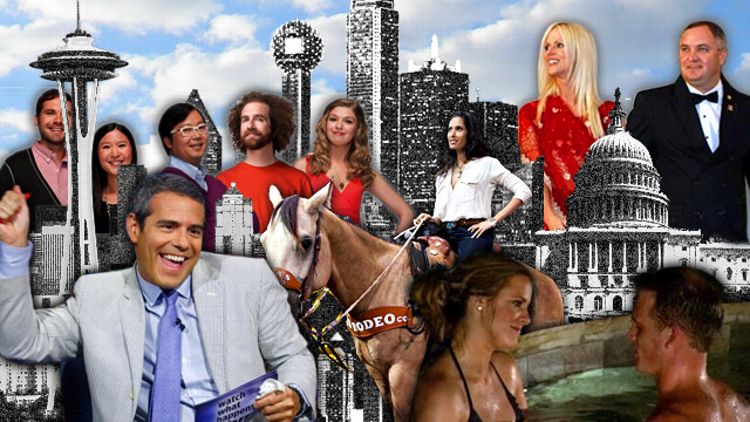 Bravo’s reality TV empire is primarily a New York–Los Angeles operation, preferring to stay in the parts of the country where we stockpile attention-starved interior decorators and housewives who are ready to drop everything and shoot a season of pomtini-fueled bickering at a moment’s notice. But in recent years, a pattern has started to emerge — every year, Andy Cohen & Co. will set up shop in a second- or third-tier metropolitan area and launch a couple of shows — usually a season of Top Chef and a non-competitive (except for precious camera time) docu-drama. The benefits of this strategy, like any good foreign-exchange program, are mutual: Urbanites get a chance to see what life is like in “the rest of the country,” and the lucky residents of the spotlighted city get a chance to show coastal elites that they have a Neiman Marcus and an Asian-fusion tapas bar, too.

This programming strategy recently hit home when Bravo announced that it would be rolling out its newest era in Seattle — a city I partially grew up in and have spent a good amount of time in. Top Chef: Seattle and LOLwork (a workplace reality “comedy” about the I Can Has Cheezburger empire) both premiere tonight, and reality TV is about to get its first long look at the Emerald City since The Real World ran off in 1998, leaving a barrage of Red Delicious apples and Rainier beer bottles from disgruntled locals in its wake. Let’s see how Seattle stacks up against former Bravo strongholds.

Premise: Find out what really happened when Michaele and Tareq Salahi crashed the 2009 White House state dinner, but only after sitting through eight weeks of far less compelling drama between five women who who are not nearly as pathological/straight-up insane (because who could be?). This was the only Housewives franchise to ever get canceled after a single season. Go figure.

Local Flavor: Even though none of the wives officially work in politics, they are constantly trotting out and name-dropping vaguely political figures too obscure for most Bravo viewers to have the energy to Google. Also, the episode titles get a lot of mileage out of political puns, with names like “Disloyal to the Party,” “Foreign Relations,” “Special Interests,” and “Perception Gap.”

How Do They Spend Their Time? Talking about their reputations, debating each others’ qualifications as “Washingtonian ladies,” tracing their dogs’ ancestries to the Kennedys, lying about being Redskins cheerleaders. And, OH YEAH, CRASHING THE WHITE HOUSE.

What We Learn About D.C.: “In D.C., there’s a thin line between politics and social life, and it’s all about who you know.” — Michaele

“You can’t be in D.C. and not be involved in politics. That’s just what we do in Washington.” — Stacie

Local Criticism: “Too contrived. I wish the women were more representative of DC residents. The British woman absolutely has no business on the show, she knows nothing of DC. Aren’t there enough attention seeking women in DC, to get real residents? It’s like having the NY housewives living in Schenectady.” — Washington Post commenter 12345leavemealone

Premise: The eighth season of Top Chef heads to the nation’s capital because they’ve been to pretty much every “food heavy” city in the country, and they’re kind of running out of ideas.

Local Flavor: The cheftestants cook for Nancy Pelosi (big Top Chef fan!) and Leon Panetta (who has to leave halfway through dinner after getting a call that I’m still convinced was about finding Osama bin Laden). They also take over the concession stand at Nationals Park for a day, where some dumb-dumb tries to sell tuna tartare to a baseball crowd.

How Do They Spend Their Time? Cooking Michelle Obama–approved school lunches for D.C. schoolchildren, bickering, stealing pea puree in a last-ditch effort to inject drama into a DOA season.

What We Learn About D.C.: Senators, diplomats, and CIA officials are way more apt to make guest appearances on Top Chef than on The Real Housewives.

Local Criticism: “Angelo is a jerk and I think he did throw the competition to hurt his team. On a positive note, I am happy they filmed at Deal Middle School! It’s a well performing school, the kids shown were truly diverse (so many think that white kids don’t attend public schools in DC) and they came across as fun, articulate and well behaved (for middle schoolers!). It was nice to see a DC school in a positive light on national TV.” — Washington Post comment

Premise: Six “friends,” who between them represent the ne plus ultra of the swingin’ Dallas singles scene, live and love in the Big D.

Local Flavor: Sushi spots, retro burlesque joints, upscale bowling alleys, and other places that may as well have been shot in West Hollywood in 2005, all in an effort to prove that Dallas isn’t all just big hair and rodeos. This was disappointing if you only started watching the show in hopes of seeing a lot of big hair and rodeos.

How Do They Spend Their Time? Drinking South African wine, going to janky-looking charity events, getting their tarots read, and stealing dogs from poor minorities.

What We Learn About the City: “In Dallas, Friday night is date night … That’s the night if you’re going to go on a date, you do it.” — Matt

“Dallas is a great place for twenty- and thirtysomethings because there are so many people our age here.” — Tara

Local Criticism: “More than just presenting us with hopelessly dull people, though, this series shows them doing incredibly dull things: meeting for lunch in Plano; enjoying bottle service at a mostly empty nightclub. Perhaps it’s the familiarity of these settings for viewers in North Texas that deprives them of their onscreen luster — if you’ve ever been to Jasper’s, for instance, you know it’s not quite the luxe establishment presented on the show.” — Christopher Kelly, DFW.com

Premise: An impractical number of chefs (30!) compete for the title of Top Chef while taking a lot of unnecessary and time-consuming road trips between Dallas, San Antonio, and Austin in what is generally considered to be the worst season of Top Chef since D.C.

Local Flavor: The chefs cater a quinceañera, have a barbecue battle at Salt Lick in Austin, cook dinner for some terrifying rich white people in Dallas, and make pancakes for Pee-wee Herman.

How Do They Spend Their Time? Cooking a lot of meat outdoors, suffering heat stroke while cooking said meat, bullying the Asian girl, and eventually escaping to Vancouver to hack at ice blocks and otherwise lose all professional dignity.

What We Learn About Texas:

When cooking for Real Texans, don’t put beans in your chili. DON’T — don’t. Were you thinking of — No. Don’t do it. Do not. Put. Beans. In Your. Chili.

Also, en route to the Tejas Rodeo in San Antonio:

Ed: “I think it’s cold and lonely, being a cowboy.”

Richie: “Oh yeah. Cold and lonely, and you could get murdered and nobody would know it.”

Local criticism: “You forgot to mention that the owner of the Salt Lick incorrectly referred to the pork ribs as beef ribs. I had to rewind three times. Did I miss his sarcasm? Or is he so fat and happy with the Salt Lick’s profits that he really doesn’t know?” — Austin Chronicle commenter Rob G

Premise: Cooking! Challenges! Fish Throwing! And Padma Lakshmi in a Patagonia fleece, if they do their homework.

Local Flavor: The good folks at Eater Seattle have compiled a TC stalking map to track where Padma, Tom, and the cheftestants have been spotted around town. Locations include fancy food mecca Melrose Market, oyster spot The Walrus and the Carpenter, and a pho shop in Bellevue. No sightings with America’s Best Bartender Murray Stenson at Canon, presumably because this is not Top Lush: Seattle (which would actually be a really good show. Great bars in Seattle!).

How Do They Spend Their Time? Digging through piles of sea animals, getting knocked up, losing their tempers, and talking acid with Chris Pratt.

Premise: Working for an Internet content farm is just as wacky as an episode of the popular NBC sitcom The Office!

Local Flavor: In the premier episode, we don’t venture too far from Cheezburger HQ near the Seattle Center. (Minus a cringey scene in which employees Will and Alison go hassle some locals for a staged viral vid in Waterfront Park.) But the office is well stocked with gym ball office chairs and standing desks, which is pretty dead-on.

How Do They Spend Their Time? Apparently, just evaluating pictures of cats all day, and spendin’ that sweet investor cash on unwatchable viral videos. (LOLwork does not focus on the legions of Cheezburger drones paid minimum wage to churn user-submitted GIFs through a CMS for 60 hours a week, even though I’m sure their rage-filled happy hour vent sessions would make for better TV than 10 kitties on a Roomba.)

What We Learn About Seattle: The grunge movement ended 20 years ago.