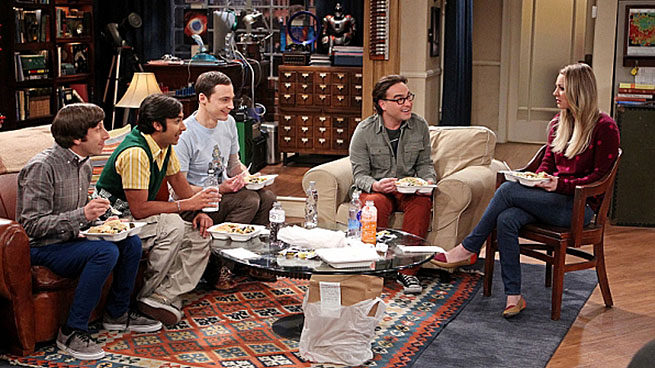 The cast of CBS’s The Big Bang Theory has once again arrived at a career checkpoint where enormous raises are essential for further high jinks to materialize. Their last time here was in 2010, between Seasons 3 and 4, when Jim Parsons, Kaley Cuoco, and Johnny Galecki shot from a $60,000 to $200,000 payday for each episode. Raises were built in for the following three seasons, and the stars of TV’s most-watched comedy are now earning $325,000 for every 22 minutes of TV they appear in.

Season 8, though? $1 million or bust. Yup, they’re reportedly looking for that Chandler Bing money, and it’s holding up the show. The Hollywood Reporter writes that the first table read of the season, which was scheduled for today, was bust. “It’s unclear just how long production will be delayed as the cast and studio remain at an impasse on a new deal. The move comes as a surprise to the studio, which previously was not expecting there to be a work stoppage and the cast to arrive back at work Wednesday, with or without a contract.”

The adult cast members of Modern Family similarly held up production in 2012, between their third and fourth seasons, and managed to nearly triple their salaries. In addition to Parsons, Cuoco, and Galecki, Simon Helberg and Kunal Nayyar are still negotiating for better deals. Mayim Bialik and Melissa Rauch have signed their new contracts, “with both securing big raises.”

The Big Bang Theory cocreator Chuck Lorre knew to expect these negotiations, although he seemed to think they’d go a little more smoothly. “There are people at Warner Bros. Television and people representing the actors who have done this before,” Lorre told THR a week ago. “This will work itself out. I think it’s great; I want them all to be crazy wealthy because nobody deserves it more than this cast. It’ll work out.”

The Big Bang Theory’s seventh season frequently attracted more than 20 million viewers, which was a 4 percent boost from the year before. Maybe Warner Bros. should just sign the fat contracts before these guys start asking for individual tropical islands for each episode.

Allison 'Marnie' Williams Is Not the Peter Pan We Need, But the One We Deserve