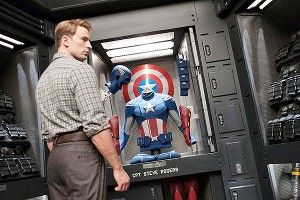 It was only a couple of months ago that we here at Grantland joined the rest of the country in marveling at The Hunger Games‘ legendary opening weekend. The child-murder-y smash outperformed even the rosiest of predictions and raked in $155 million, which gave it the third-biggest opening weekend in history. (And how much novice bowmanship did it inspire? There is simply no way of knowing.) But now a new kid has arrived on the blockbuster block: Marvel’s über-hyped, star-studded epic The Avengers pulled in $200.3 million over the last few days, good for the Biggest! Opening Weekend! Of All Time! And that’s not all. As the L.A. Times points out, “The North American box office total added to an already unfolding global success story; playing in 52 international markets, the movie collected $151.5 million this weekend, raising its tally abroad to $441.5 million. That means that after just two weeks in release, The Avengers already has sold $641.8 million worth of tickets, jumping past The Hunger Games on the ranking of top-grossing 2012 releases worldwide.” Already? Ouch. And this comes in unstable times for the HG franchise. Not only is there a new director coming on board for the sequel, Catching Fire — I Am Legend’s Francis Lawrence, replacing Gary Ross — but possibly a new writer as well: Michael Arndt, of Little Miss Sunshine and Toy Story 3, is in talks to tackle an existing script from Slumdog Millionaire‘s Simon Beaufoy.

Meanwhile, The Avengers looks to pile on. As the Times also points out, the movie pulled an A+ Cinemascore, meaning its road to the billion-dollar club will be greatly aided by a nation of 13-year-olds telling their friends just how freaking awesome it was to see the Hulk destroying stuff. But don’t feel too sorry for The Hunger Games, as The Avengers‘ success will clearly now push the dueling blockbuster franchises into a Larry Bird–Magic Johnson relationship, with each rising to the occasion to best the other for years to come. (Because you’re wondering: In this scenario, Tony Stark is Cedric Maxwell and Peeta Mellark is Kurt Rambis.) For now, then, let’s enjoy the fact that Joss Whedon — the cultishly beloved TV creator who, as recently as 2010, was getting network shows canceled on his ass — just directed one of the biggest movies of all time.

Filed Under: Movie News, The Avengers